It's the weekend of the North American International Motorcycle Supershow Show in Toronto. For the last decade, this has also been the weekend of the Annual VROC Frozen North Dinner. It was traditionally held at the Mandarin in Rexdale but they screwed up the reservation last year. Tom made a reservation at a new St. Louis Ribs and, instead of waiting until 7:00 PM, we decided 4:00 would be a good time since we were usually tired of the show by then. Today, we will go to Woodstock, dropping by Cambridge first to visit the grandkids (who are home with Mike) and drop off some personal items.

We were out of the driveway at 6:50 AM. The temperature was -5C and there was a light freezing drizzle coming down. Not the best travel situation, especially given the horrendous wrecks that we've had in the last week, so I hope the salt trucks are out in force. We stopped at Pioneer for fuel and saw our price was $1.326. We'll see how that compares to down south.

Traffic was light as we headed south. The drizzle gave way to a light fog as the sun rose and warmed the snow. The radio said it was going up to +3 today in Sudbury. Coverage was low all through the snow belt (the area that gets lake effect precipitation off Georgian Bay). We made a quick rest stop in Waubaushene where the gas was $1.189 per liter. Almost $0.14 or more than $0.50 per USG less than it is back home, just 150 miles to the north.

The service center (I have decided I am going to start using U.S. spellings to keep my spell checker happy) in Barrie remains untouched. The sign still says Closed - Rebuilding To Serve You Better but no one is rebuilding. The MTO website has removed the reopening date and replaced it with TBA. I am willing to bet that MTO evicted the old tenants (McDonald's and Petrocan) to get higher rents from new tenants, who then reneged when the economy hit the skids. It may be a long time before it reopens, if ever.

Snow cover became light to non-existent south of Barrie. It would probably be a good weekend for running shoes but I forgot mine at home. 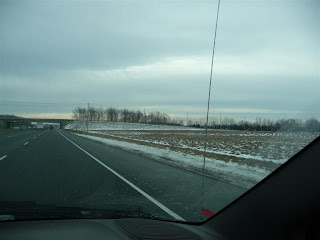 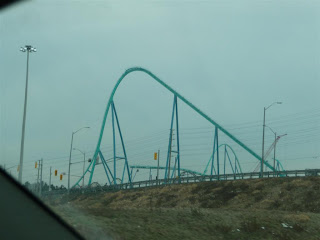 The new Canada's Wonderland coaster is coming along nicely
It was early so we followed the 400 to the 401 and headed west. Through Mississauga, the Toronto-bound traffic was dead stopped for several miles. I would hate to live here. Near Halton, we saw some Canada geese flying north. Then, near Highway 6, we saw a motorcycle headed east. While I don't agree with the alarmists as to the cause, the climate is a'changing.

We arrived at the Cambridge McDonald's and had a light lunch. I had called Mike to say we were coming but he had taken the kids to Aylmer for the day. We just dropped the boxes we had to deliver in their garage and headed on to Woodstock. One thing I did note today on the way down was a pretty extensive police presence on the roads.

When Heather and Tom got back from work, we headed out for supper. Restaurants in Woodstock are pretty popular on Friday nights. We tried Kelsey's and Montana's but the wait was too long. Boston Pizza was shorter so we waited and were seated in short order. The dinner was OK but nothing to rave about. Then we went back to the house and watched Paul on DVD again. Sandy and I saw this at Doug's on Christmas Day and laughed our proverbial asses off. It is just as funny the second time around.

I did doze off a bit near the end of the movie so when it was over, it was time to hit the sack.