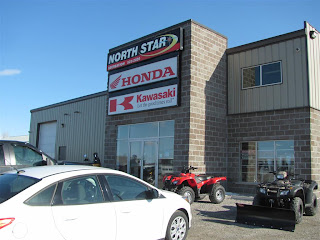 Northstar Recreation is a motorcycle dealership in Sudbury started a number of years ago by Dave Bimm. Dave had been the service manager at another local dealership prior to that and had taken good care of my previous GoldWings. A couple of years ago, after a lot of work, North Star was granted a Honda dealership in addition to the Kawasaki line they had started with. 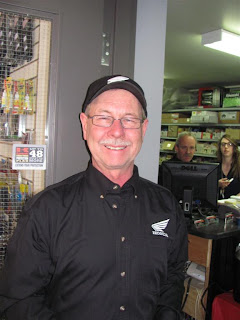 Today we were there in response to an invitation extended to the Freedom Riders along with other local groups to witness the unveiling of the new Honda F6B. The original F6 was the 1500 cc Valkyrie, which was a stripped down bike using a hopped up version of the GL1500 motor. Using six carburetors instead of two and more aggressive cams, the bike would pass everything except a gas station and found a strong following. The F6B is a stripped down bagger style bike using the stock GL1800 motor. While this was the Canadian unveiling, I did point out the bike was on the road in the USA and U-Turn had just picked up his in Chattanooga and was riding it back to Boston. 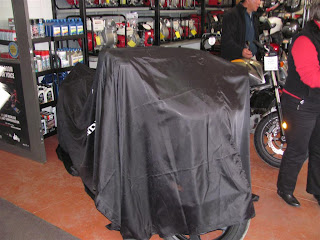 Dave had laid on a very nice spread of food and refreshments. The small crowd came from various organizations and also included regular North Star customers. In advance of the appointed hour, since we were all there, one of Dave's staff started the unveiling by uncovering the three versions of the new CB500. 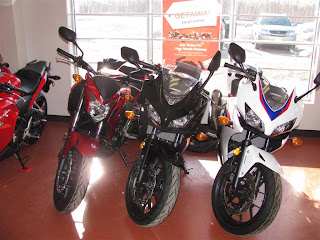 With the entry level bikes uncovered, the crowd held its collective breath and the cover was pulled off the jet black F6B. With a shorter windshield and no trunk, the bike is lower and lighter than a GoldWing and should be attractive to the bagger crowd, those that like the Kawasaki Vaquero or Harley Davidson Road Glide Custom. The F6B should be the fastest, best handling bagger out there, reinforced by the super reliable GoldWing engine. Plus, in black, it just looks plain mean. The centre stand is optional and it doesn't have a cruise control (a mistake in my mind), but it is state of the art in its class. 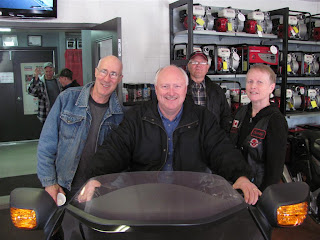 Freedom Riders Ray, Terry, Leo and Sandy around the F6B

It was nice of Dave to invite us and we enjoyed stopping by. When he first got the Honda dealership, he warned me that his mechanics were not up to speed on GoldWings. I appreciated his honesty at the time. He told me that they have gotten them figured out now so I am looking forward to finally being able to deal with a local shop for the first time in over ten years for my rare routine maintenance.

Thank you Dave Bimm and Northstar Recreation. We will be seeing you down the road.
Posted by Jim "Skid" Robinson on 4/05/2013