After a few nice spring-like days, it was back to cold this morning. There was a hard frost, a little snow on the ground and a forecast high of -6 C. The tailgate on the truck was frozen shut so, rather than fight with it,  everything went into the back seat.

We were rolling at 7:30 after a quick stop at McDonald's for coffee, breakfast sandwiches and muffins to go. We ran through some snow squalls on the way to Cambridge and there was more snow on the ground when we got there. 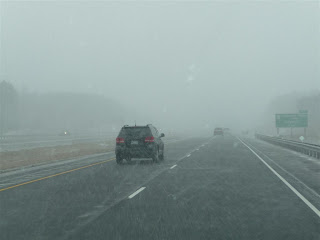 When I exited the 401 at Hespeler Road in Cambridge to head up Highway 24, I felt a slight clunk. At the stoplight, I got out and found my suspicions were correct. The frozen tailgate that hadn't released when I pulled the latch back at Heather and Tom's had finally decided to cooperate. It was wide open and, had I not checked, some of the items stored in the box might have parted company with us. Lucky to have caught it sooner rather than later, I shut it firmly before we continued on.

Going through Guelph a different way, I saw a sign for John Galt Park. Ayn Rand fans will get a kick out of this, although it was named for a different John Galt. This one was the founder of Guelph but it should still be a good venue for libertarians to congregate.

The trip up Highway 24 to Airport Road, north to Highway 9 and east to Highway 400 was uneventful. I watched the speed because of the ticket I got along this route last summer, but saw no police this time. We made up for that on 400 north where we saw three traffic stops within a few miles near the Highway 88 interchange. On the plus side, they were working the southbound side, catching people heading back into Toronto after the long weekend.

Through Barrie and north, we experienced severe crosswinds and blowing snow. It may be April first but it felt like a severe November day. The construction was still going on at the Barrie northbound service centre, until recently an empty lot. We stopped at the Esso at Waubaushene so I could grab a couple of 5 Hour Energy bottles. These are great for fighting off drowsiness when driving. 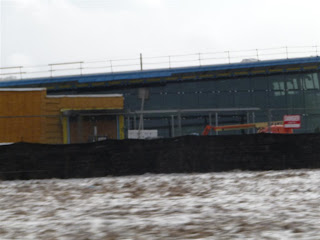 On the two-lane north of Parry Sound, we got into a line of slow traffic following a snowplow which was salting a bare highway. Since we were approximately 43 vehicles behind the plow, I bided my time and waited for the passing lanes. Unfortunately, the plow took up both lanes in the passing stretch so nobody was going anywhere until he pulled over at Pointe Au Baril. As we went by, I noted that not only was he salting a bare road, he was plowing it as well. It is always nice to see one's hard earned tax dollars being flushed down the drain.

Now we were lined up about 42nd behind a tanker that had been right behind the plow. Again I waited for the passing lanes but every time we got to a passing lane, some twit would pull to the left and briskly not accelerate. Sometimes they weren't even passing anyone and so I went by two on the right. I finally got by the truck just before the Magnetawan River and the last sixty miles was relatively easy.

Near the Britt turnoff, the OPP were running a bit of an immoral speed trap. A cruiser was parked hidden in some trees and the constable was using laser to paint southbound traffic a half mile away. The immoral part is that the traffic was being clocked as it came to the end of a passing lane on a downhill section. People who were actually driving the speed limit everywhere else would probably be exceeding it in this situation. This was very much like how I got ticketed on Highway 9 last summer.

We got a couple of shots of the construction around the Highway 64 turnoff, as well as what used to be the Holiday Golf Course until they built a traffic lane over one of the fairways. The four-laning is a good thing and I hope they can get it done by 2017, as scheduled. 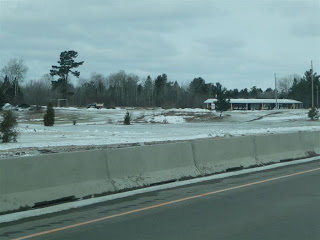 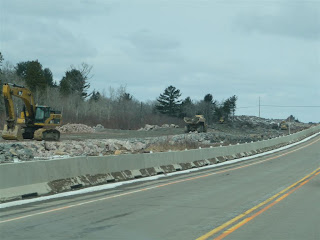 We pulled into the driveway about 1:00 PM. There was a raw wind blowing and we discovered the salt truck we followed had been dispensing brine. As a result, the front and sides of the truck looked like they had been whitewashed. But we were home and that is what counted. 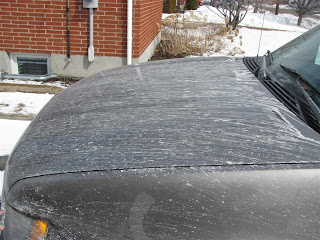