When we woke up and headed down for breakfast, we found that Leo had already headed home. He decided that he wanted a faster pace than the group was maintaining. This hotel had a hot breakfast and, even though the scrambled eggs were dried out and the link sausages were gone, it beat the more usual continental fare.

We were rolling again at 9:00 AM. Rob's TomTom attempted to take us out of town on a route that didn't exist. To be honest, once we got off the main street the Garmin also thought the dead end parking lot was a through street. Eventually, we made it to the road to Perth and got out of town. 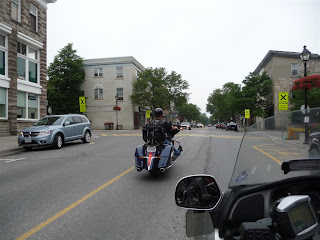 In Perth, it was my turn to get screwed up on directions. We were looking for Highway 511, a direct winding route to the crossroads known as Calabogie. As we approached Perth, my Zumo cut out and I had to scramble to reboot it. I re-entered Calabogie as our destination and we were almost out of town before I picked up on the fact that it was routing us via the longer, faster and less winding Highway 15. We all pulled into a parking lot while I forced the GPS to take our preferred road. Once it knew what we wanted, the directions got us to the road right away.

Highway 511 started out as a bit of a snooze. It had mostly straight sections through farmland. There was even a crossroads with an Amish store. Strange to see Amish up here when Mennonite is the prevailing flavour in Ontario. The snooze factor disappeared after we passed a sign that said it was 30 Kms to Calabogie. We started up into the Shield and the road became a solid series of curves, many marked at 60 KPH or less. As far as Ontario roads go, this stretch was pretty good.

We made a coffee stop at Munford's in Calabogie. The coffee was self serve, not all that good and pretty expensive while the place had a boondocks ambiance despite being so far south. Eastern Ontario is a whole other world. 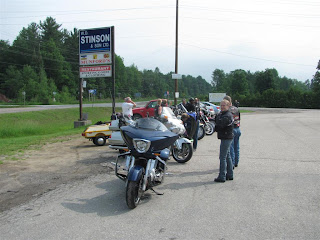 From Calabogie, we headed east towards Highway 17. There had been talk of going west towards 41 but, while it looked interesting, it would have added quite a few miles to the day's ride. The road we took had a lot of potential, which was blunted due to a couple of slow moving four-wheelers that we couldn't pass due to there being no straight stretches. That changed in Burnstown when we took a county road directly to Renfrew, a stretch that was as straight as an arrow.

As we entered Renfrew, we had to make a sharp right at a traffic light. I hit an  irregular patch of asphalt followed by a manhole cover that caused the rear wheel to slide a bit, but I recovered without mishap. It was another one of those deals where you don't really know if you have the reflexes until you need them.

We stopped at a No Frills gas bar for fuel and to say goodbye to Jack and Cathay. They would be heading back to Parry Sound along Highway 60 while we would be taking Highway 17 to Sudbury. Our plan was to split the 400 kms to Sudbury into two equal parts, stopping half way in Mattawa.

Although Highway 17 is two lane, it is wider and faster than the country roads we have been on lately. You can make good time but it is amazing how much less enjoyable it is. I did, however, take the time to once again marvel at the symmetry and bond between riders travelling in a group. Each rider is master of their own machine but also is aware of the other riders and how the individuals fit together. Many people say they don't like group riding but I enjoy it when the other riders know what they are doing.

I slowed to the speed limit entering Chalk River. This community which extends through several small towns is policed by one municipal service and is regarded as one of Ontario's most notorious speed traps. Just before Deep River, we saw Barney Fife with someone pulled over on the shoulder.

Rob thought we needed a pit stop in Deep River and pulled in at the Tim's. The quick stop ended up taking 45 minutes and Sandy got to try the new Tangerine Orange Smoothie With Yogurt. It tasted just like a Creamsicle. I put more coffee in the Butler mug. 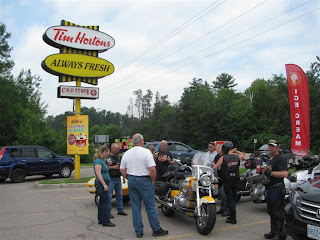 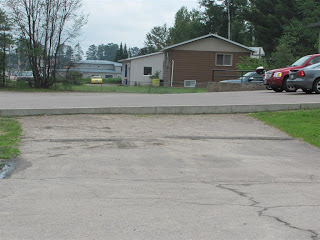 The next leg took us to our planned stop in Mattawa. Although they have a new Tim's, we pulled in at the Subway for lunch. Sandy and I like to share a ham and Swiss cheese meal deal with two cookies instead of chips. Everyone also fueled up, the last stop of the trip. The sky was blue, the day was hot and Terry said he hoped it wouldn't rain. We thanked him for jinxing us. 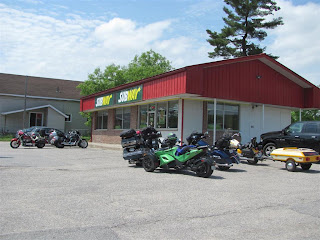 Past North Bay, we made what was supposed  to be our final stop at a place called How Convenient so that Patsy could get some (relatively) cheap cigarettes. By now, ominous clouds were forming ahead of us (thanks again, Terry) so Sandy and I threw all our electronic gear, wallets and other water susceptible items in the trunk.

As we reached Sturgeon Falls, a mere 55 miles from home, the raindrops started falling. Rob pulled the group into another No Frills to don rain suits but Sandy and I had decided to run without them since we were almost home. We wished the rest well and continued on. There was a stretch of perhaps fifteen miles where it was precipitating pretty heavily and, with limited visibility, my main goal was to stay out of the rain filled tire ruts. Then it eased a bit and I leaned on the throttle some more. Before Sudbury, the rain stopped altogether.

We pulled into the driveway at 5:00 PM. Sandy had been using her beaded seat cover and found to kept her butt almost dry by channeling the water beneath her. In fact, despite the deluge, she wasn't too wet because we never stopped and the fairing protects the riders pretty well when moving. I wasn't nearly as dry. As luck would have it, I checked the radar and saw that if we had stopped for coffee for an hour in Sturgeon, we would have missed the rain altogether. Oh well.

It was a good three days with the club. Next year, we are planning a full week (nine days counting the second weekend) for a trip to North Carolina to visit the Tail Of The Dragon and other roads. I will be the guide. Can't hardly wait. 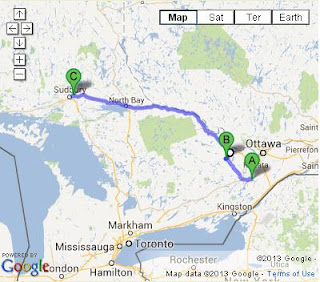