I got a message on Facebook a couple of days ago from The Lovely Carlene, better half to the infamous Willie Wonka from Southern Illinois. She informed me that, as they had said in Maggie Valley, they were in  Mackinaw City with their GoldWing group and would be coming up to the Soo today. We decided that it would be nice to ride down and have lunch with them and Leo decided he would come along.

I rolled out of bed early and checked my watch. All that told me was that the battery had died overnight so I looked at the clock instead. We got up, geared up and, with Leo punctual as usual, we were rolling westbound by 7:00 AM in a heavy fog. 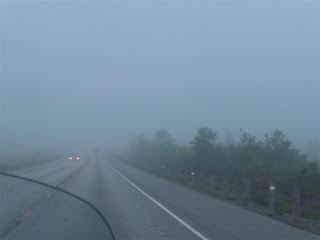 The fog broke by the time we made a quick pit stop in Espanola so Sandy decided not to put on her heated Gerbing vest. Then we went back into the cloud several times so she changed her mind in Blind River while I was filling my Butler mug with coffee.

West of Blind River, the tar snake fairy had a field day. Most of you know tar snakes, the long patches put down on cracks in the road. They don't bother cars much but (to quote my Maine friends) they are wicked slippery when they are wet. Or hot. Since Sandy donning the electric vest had caused the sun to come out, they were pretty slick as we rode over them. There is a technique, similar to the ones used for gravel or steel grate bridges. Let the bike slide and hope it regains grip once it is back on the real asphalt. But these little devils can mess up a nice ride, especially in the corners.

We arrived at the Casino in the Soo, our established rendezvous point, at 11:00 AM as planned. There was a text from Carlene (they were unable to call Canada direct on their Net10 phone but could text) letting us know that they had departed Mackinaw City at 9:57. 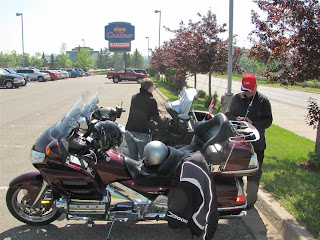 Waiting at the Soo casino

Before long, there was another text saying they were fueling on the American side and would be over the border shortly. I watched the bridge and, when I saw several bikes, gave Willie a shout on the CB radio. He replied and said they were almost at the Canadian Customs checkpoint. Soon after, Willie and Carlene pulled in to the lot with three other GoldWings in tow. Willie made introductions but, without name tags, they didn't stick.

I had made lunch reservations at Giovanni's on Great Northern Road. It was downright hot as we rode up there and got parked. Inside, they had a table waiting for us. A pretty young lady named Elizabeth took orders from the eleven of us without writing anything down. Even more impressive, she brought every order to the correct person. I always enjoy good Italian food and this was no exception. 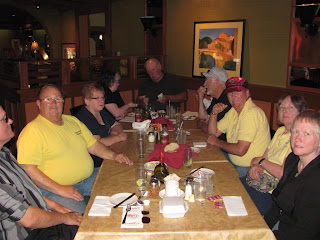 The gang at Giovanni's

Carlene told us they needed to be back in Soo Michigan by 5:00 PM for a dinner cruise. After a bit of discussion about what to do after lunch, I suggested we visit the Canadian Bushplane Heritage Centre, which was back down by the river. Everyone explored the exhibits and we watched a film that featured one of Marg Watson of Sudbury Aviation's DeHavilland Beavers, CF-IUU. We used to ride a lot with Marg and her first husband Bob before she caught the flying bug and bought an airline. Some of the guys were more intrigued by the engines, especially the old radials. 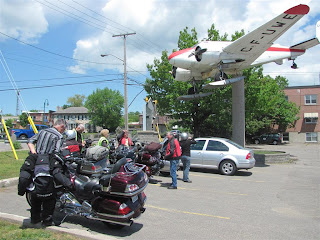 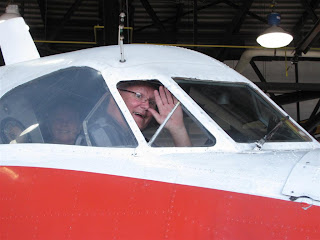 Leo and Sandy in the cockpit of a Saunders ST27

When we came out of the museum, we found that a few of the bike centre stands had sunk quite a ways into the asphalt. We muscled them upright and moved to a fresh spot while we suited up. While we were doing this, young blonde girl jogging down the street hailed us. It was Elizabeth, our server from Giovanni's. Small world (no song, please).

I led the group down Queen Street to the bridge and we bid our friends goodbye as they turned onto the plaza to cross back over for their dinner cruise. Then we fueled up and headed back east for Sudbury. It was 26 C as we left the Soo but the cooled off as we got close to the North Channel near Thessalon. 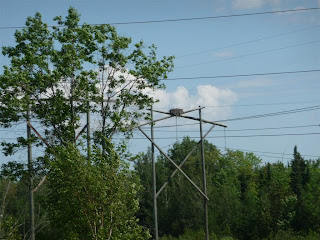 One more quick stop in Blind River and we were half way home. Near Serpent River, we had to slow and dodge around a crew painting lines on the highway. This has to be a job that falls in the mind numbing category. 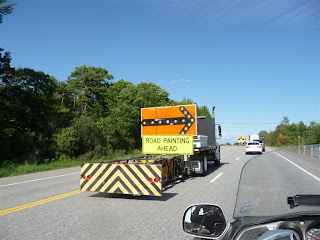 After Massey, we encountered steady lines of westbound traffic, making it difficult to pass. It was Wednesday, not a day I would have expected the highway to be this busy. We did get clear a bit east of Espanola when a small black car went by us in a passing lane. We picked up the pace and followed him until an unmarked cruiser going the other way suggested he slow down by flashing all its red and blue lights.

As we approached  Sudbury, we could see a line of dark clouds roiling ahead of us. I stopped at the Fairbanks turnoff to give everyone a chance to don rain gear. Sandy, who usually berates me for not stopping in time, pointed out that we were only going home and didn't need suits. I stuck my camera, cell phone and wallet in the trunk and we pushed on. Not two miles later, we ran into a wall of water that lasted about fifteen miles but, by the time we got to the city, we were under blue skies again. 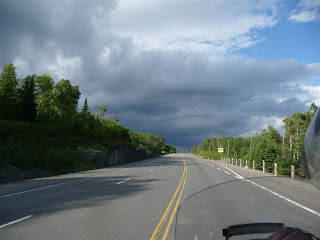 There's rain in them thar clouds

We made it home without mishap and got the bike back into the garage. Then we took the wet clothes and hung them to dry. All in all, it was a lot of miles just to see a couple of old friends but it was definitely worth the ride. 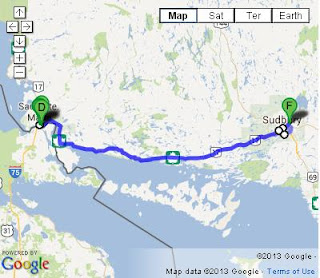