For the last few years, the Freedom Riders have gone on an annual three day expedition called the President's Ride. The route and destination are up to, you guessed it, President Rob. This year, the club would ride down to Lake Ontario and tour the southeastern part of the province. Sandy and I have never been able to make it before but there was a hole in our calendar this year just crying to be filled. The new sod was laid in the front yard and I needed to get out of town.

Packing was a bit challenging. While we used to be experts in the field of stowing gear on a motorcycle, we haven't been on an overnight bike trip since 2010 and were somewhat rusty. But we managed to get it figured out by the time Leo showed up at 7:00 AM, fifteen minutes ahead of schedule. I should mention that I spent some time yesterday cleaning the bike, something that I am not known for. Using Kawasaki's new Pre-wash and some White Diamond metal polish, I even got the front wheel looking almost respectable. Maybe this is the new me. Who knows for sure?

Anyway, we set out on a cleaner than usual bike at 7:00 AM to make our 8:00 AM departure point at Tim's in the south end. The skies were grey and the temperature was in the low 50's. It spit a bit on us on the by-pass but that was it. We were there early enough for me to fuel, have a breakfast sandwich and fill my coffee cup before the posted time. By 8:00, everyone was there but our leader and his good wife. This was strange because they are usually early. They rolled in about ten minutes late, victims of the construction zone at a busy intersection in the north end of the city. Right after that, our eight bikes and ten people were on our way south on Highway 69. 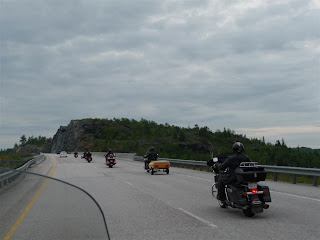 There was a brief stop at the French River Trading Post, where we were inundated by swarms of blackflies,, before we pushed on the the Tim Horton's at Horseshoe Lake Road south of Parry Sound. We arrived there one half hour ahead of schedule and linked up with our second element of four more people on three more bikes. Sandy's Gerbing vest had quit working again, probably due to a bad plug on the harness to the bike. Luckily, it was getting to be much warmer and we decided to set it aside and look at it tonight when we stopped. 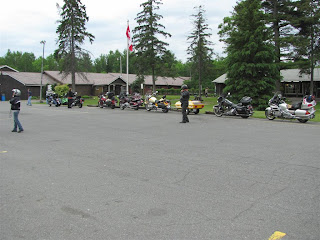 Blackfly bait at the French River 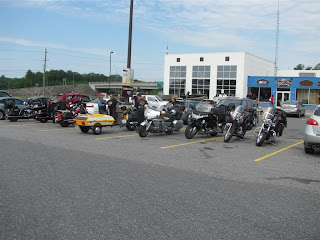 The whole group at the Horseshoe Lake Road Tim's 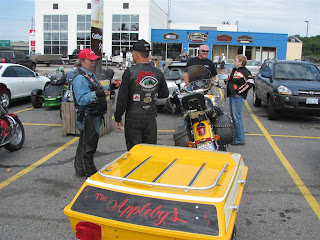 Dan talking to Jack while Terry catches up with Cathay

We left Highway 69 at this point and followed Highway 141 east. This road, which passes through Rosseau, is one of my favourites with many 60 KPH curves. The fact that much of it was recently resurfaced didn't hurt. The only drawback was a scrap metal truck we encountered after Rosseau and weren't able to get past before we got to Bent River. This meant that we negotiated the usually fun 40 KPH curves by the lake looking at the back end of a very slow moving hauler. 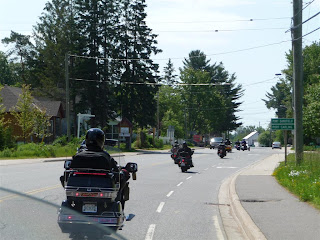 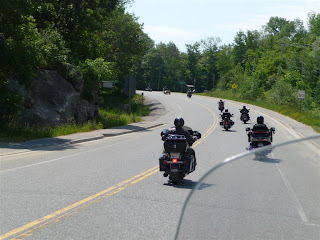 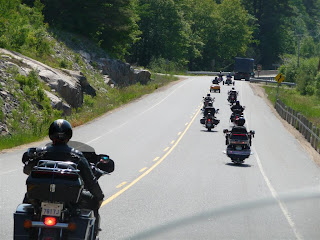 Instead of our usual turn towards Huntsville, we kept going straight on Muskoka Road 4 to Bracebridge where we connected with Highway 118. The town was busy but we eventually made it through and out the other side. Highway 118, like 141, is one of the jewels of this area with sweeping curves going up and down the hills and past picturesque lakes. 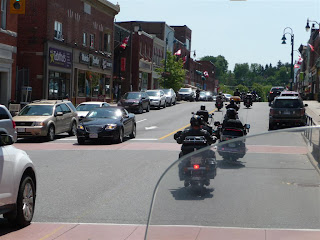 Near lunch time, Rob decided to stop at a restaurant called That Place In Carnarvon. The sign out front said the place opened at 4:00 PM but they were ready for us for lunch. I had the special, a bacon cheeseburger quiche that was almost three inches thick. I know they say real men don't eat quiche but I say that real men eat whatever they want. In any case, I recommend it. 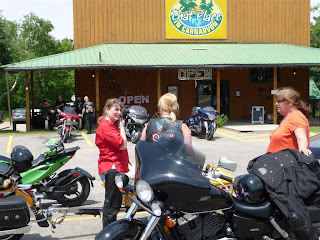 That Place In Carnarvon 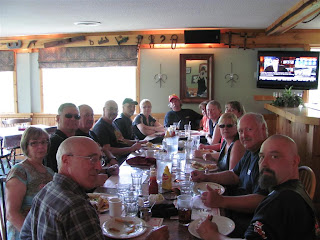 Enjoying our meals at That Place

After lunch, we continued on 118 to Bancroft where we stopped at a big Shell station for fuel. we had been going east, we kept catching up to a line of clouds but every time we stopped, the line would get ahead of us and we would be in the sunshine again. Many were riding in tee shirts for this stretch.

This may be one of the worst kept secrets of the Freedom Riders, but President Rob's path finding skills are legendary. If there is a path to be found, he won't. To assist him, we moved up from our position at the rear to second spot as we headed down Highway 62 to Belleville, our destination for today, 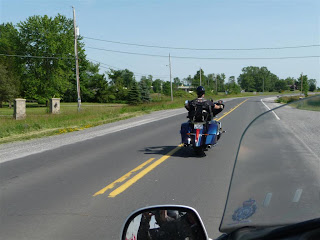 Our view from the second spot 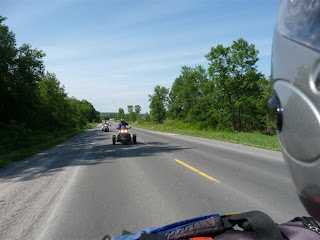 The group behind us

As we approached Belleville, my cell phone rang. Using the Bluetooth connection through the GPS, I answered. It was our friend Rainman from Georgia, now transplanted to Toronto for a couple of years. He was astounded to find out we were talking to him while we rode along at 60 MPH. We talked a bit about some suspension modifications he wanted to do to his Wing and then we were in the city so I  had to hang up so we could look for our hotel.

Rob's TomTom GPS said the Comfort Inn was one direction while the Garmin wanted us to turn the other way. The Garmin was right and we found it without further difficulty. After checking in, we parked in front of our rooms and got unpacked. The wiring harness for Sandy's vest looks like it will have to be replaced, along with the heat controller I probably blew when I shorted out a plug.

A short walk from the hotel, we found the Buffet Garden Restaurant. The food was good but I am not big on buffets any  more and, despite trying to keep my portions reasonable, ended up walking back to the hotel feeling stuffed and bloated. 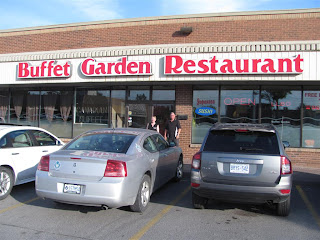 Sandy and Leo at the Buffet Garden

After supper, we moved our chairs out of the rooms and sat in the parking lot swapping stories. The girls took a walk and explored an adult store but didn't bring back anything interesting. There were a few small scooters staying here and we found out this was the weekend of the Mad Bastard Scooter Rally. Ninety-nine crazy people on small (max 500 cc but most much smaller) scooters would take to the roads tomorrow at 4:00 AM and try to cover a 670 Km main route plus side trips for bonuses. It was like a demented mini-Ironbutt. After talking to several reps from Yamaha for a while, we wished them well.

Sandy and I were among the first to turn in. It was a great way to spend the first official day of summer but we don't normally do all day rides any more and were feeling a bit tuckered out. We would need to do some training if we were to go back on the long haul circuit again. 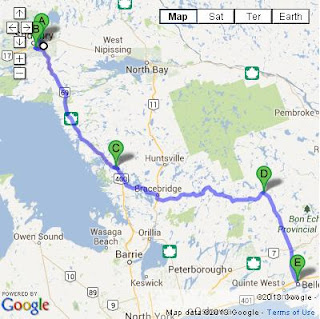