Yesterday, we headed out for the Soo about noon with Gary (Biker) and Cheryl in their GM Acadia to celebrate Shirley Kominos' (of Spyder Web's Band) 50th birthday. She and her band partner Mark Allemang have been regulars at the Freedom Rally over the years, providing live entertainment in the evenings, and some of us  thought it would be nice if club members could share this special day with her.

On the way down, we were treated to the vivid palette of fall leaves as the trees announced that winter was on its way. 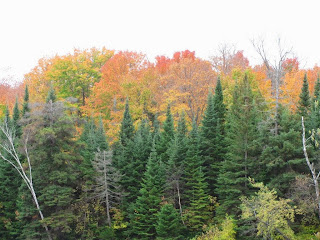 The traditional Northern Ontario mix of deciduous and evergreen trees 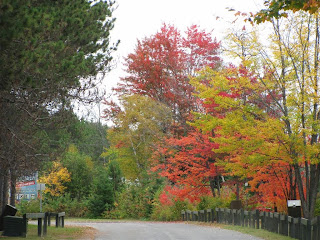 A variety of colours 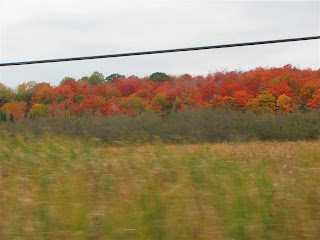 We stopped at a picnic area between Blind River (long may you run) and Iron Bridge for a brief break. 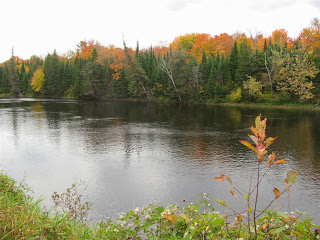 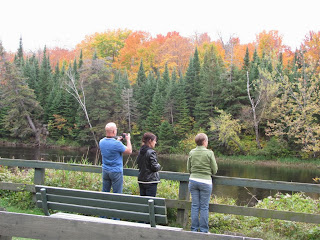 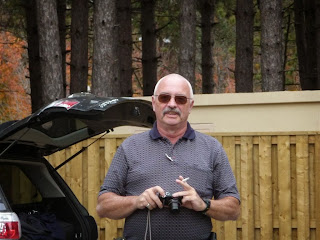 In Iron Bridge, the actual bridge is still down to one lane controlled by traffic lights. The fellow ahead of us was towing a U-Haul trailer and seemed to think the red light didn't apply to him. As he pulled ahead to the bridge, he learned why he should have had more respect for the signal. 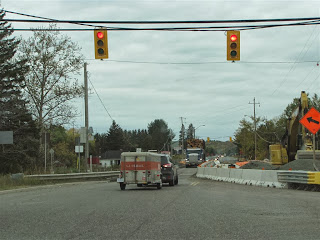 I don't need to stop for a red light 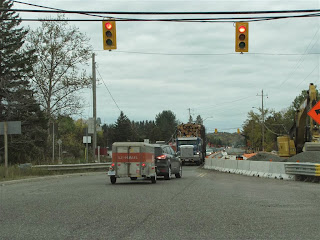 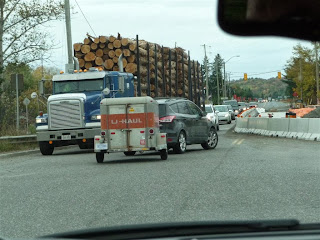 Traffic was light and the trip down was pleasant. 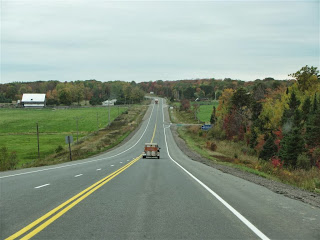 Not many cars on the road

We arrived in the Soo in good time and got checked in at the Holiday Motel, where the four of us were sharing a room. We made one trip out to find a liquor store and had to go all the way downtown to the Station Mall. Then we slipped over  to McDonald's for supper and then waited for Kenny and Carole to arrive. He didn't get away until after work but managed to get in at 9:00 PM due to a blatant disregard for speed limits. 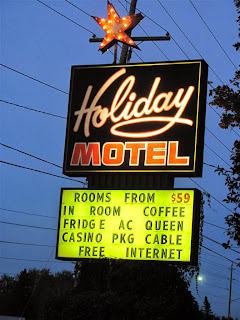 When Kenny arrived, the six of us piled into the Acadia crossover and I drove us to the Esquire Club on Second Line, not far from where I used to live. 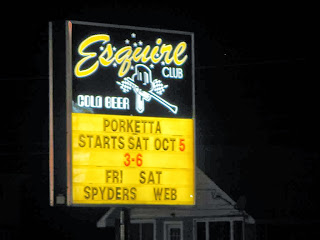 At the club, we went inside and found that Shirley had saved us a table at the front. It always makes you feel special to know the the "Reserved" sign is just for you. Bill and Janet were also there from Sudbury but were staying with family.  As Designated Driver, I bought my first Diet Pepsi but was told anything following that would be on the house.

Shirley and Mark took the stage for a normal Spyder's Web first set but then a number of others got up and the evening turned into a sort of large jam session. The crowd was small at first but soon grew to standing room only. The dance floor never stopped hopping and the music was excellent. There was even a saxophone.

One high point was a rendition by Valerie Powley of Me And Bobby McGee, one of my favourite songs. She channeled Joplin for a while and then went somewhere that was all her own. I have to say that it was the best version of the song that I have ever heard. 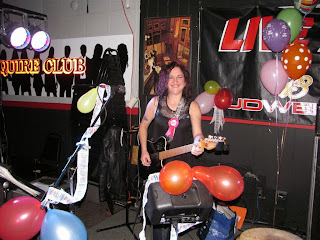 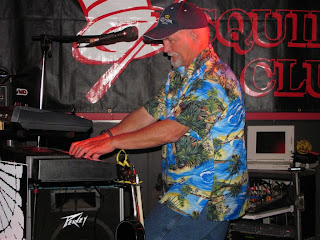 Mark on the keyboard 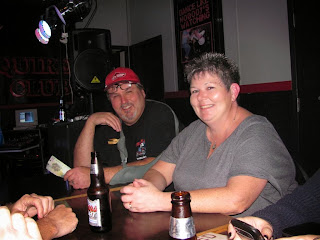 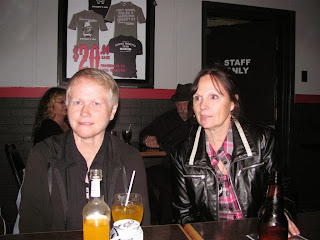 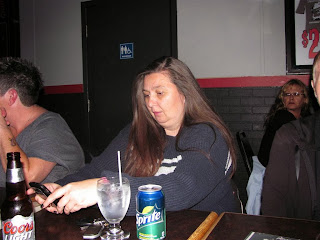 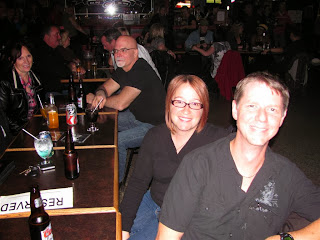 The evening wound down about 2:00 AM and then I drove the six of us back to the motel.

We didn't see Carole and Kenny the next morning. We were up fairly early and set out for home as the rain started. The trip was uneventful and  we got back, glad that we had made the trip.
Posted by Jim "Skid" Robinson on 10/05/2013