I'm not sure if I had mentioned this before, but Heather and Tom are expecting their first child in February. This will be our third grandchild. For something different, they are hosting a house party tomorrow to reveal the gender of the new addition. Heather found an idea where the results of the ultrasound are given to a baker who then bakes a cake. Under the icing, the cake is either blue or pink and, when it is cut at the party, all is revealed. We couldn't miss this so we are on our way to Woodstock today.

It was cool and clear as we left the house at 11:10 AM. After a stop for a Tim's steak and cheese on a breakfast biscuit sandwich to go (the girl on the cash didn't know this choice was on the menu), we headed south.

The highway resurfacing south of the French River was on hold as the crews stowed their paving equipment for the weekend. We stopped in Parry Sound so Sandy could get lunch at McDonald's. I was a bit annoyed to see fuel there at $1.193 per liter, compared to $1.329 we saw advertised in Sudbury. This was an even larger gap than usual.

There was a trace of snow on the ground near Barrie and almost all the trees had lost their leaves. It was Friday afternoon so I decided to avoid Toronto, cross Highway 9 and take 24 through Caledon towards Guelph. Knowing that 24 would be a problem past Guelph because of traffic trying to turn left on County 38, we took County 29 southeast at Eramosa and followed it  all the way to County 34. We followed this to Highway 6 and the 401, where we got onto the slab. As usual, the traffic was slow and heavy through Cambridge but opened up as soon as we crossed Highway 8.

On the way back from Waubaushene last week after dropping the trailer off, the truck had been making a light whine at highway speeds under light application of power. It was doing this again and sounded to me like a problem in the drive line, perhaps the torque converter, universal joint, transfer case or differential. I don't like new unknown noises because, untended, they will often leave you stranded on the side of the road. We've put 40,000 miles on this vehicle in less than 15 months and bad things will catch up with us faster than the average driver, so it will go in for diagnostics when we get home.

In an example of perfect timing, we arrived at Heather and Tom's less than a minute before Heather arrived from work. I didn't even have time to try and remember their alarm code. She was driving their brand new Hyundai Tucson which replaced their Elantra last week.

Yesterday was Heather and Tom's 4th Anniversary so Sandy and I took them out to supper. After some consideration, we went to Crabby Joe's in downtown Woodstock. Tom let me drive the new vehicle. It was a nice meal with good service, very enjoyable. Our server found the gender cake plan quite interesting. On the way back, we stopped at Zehr's and Sandy got eight large Cadbury Dark Chocolate Fruit & Nut bars, something that has all but disappeared from most shelves back home. She eats three squares a day, exhibiting a willpower I can only wish I had.

Back at the house, we watched a little TV before turning in. I'm sorry that we didn't take any photos today. Unlike Sherm, I lack the deep-seated drive to record all my great moments with the camera. I promise to try harder in the future. 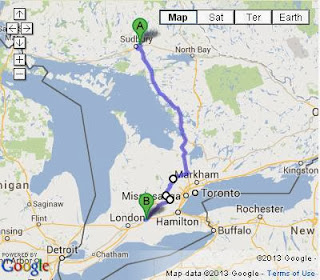