I slept in again this morning, and my feet didn't hit the floor until 8:30. I must really like this bed. Thanks to Heather and Tom for putting us up.

We were on the road by 10:00 AM, stopping at the Flying J in Ayr for fuel. I was happy to fill the big tank for $1.182 per liter. There was a crack in my primary credit card so it wouldn't swipe at the pump and I had to go inside to settle up. I guess I wore it out. No big deal, the card expires at the end of next month so I'm expecting a new one in the mail any day.

Because it was Sunday morning, I opted for the all superslab route through Toronto. I even decided to pay the toll for the ETR (Express Toll Route) 407 across the top of the city. I don't do this much because the fees are excessive but I was in the mood to get home with as little fuss as possible. It was a good choice because the traffic was minimal. Soon, we were headed north on Highway 400. 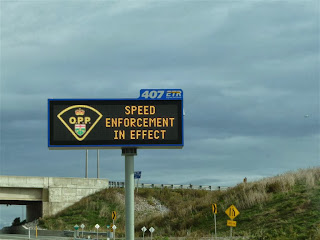 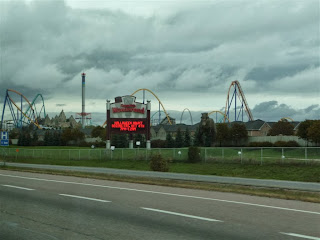 We stopped at the Subway in Waubaushene and split a ham and Swiss sub to go. The skies looked a bit angry as we pushed north. Most of the deciduous trees were bare, giving the skyline its stark winter look. 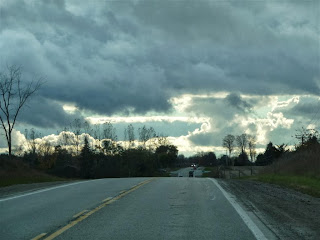 Few leaves on the trees 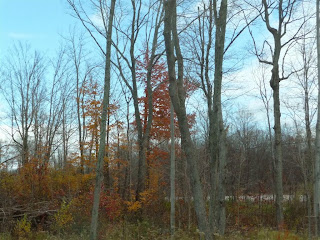 North of Pointe Au Baril, we were brought to a halt by a flag lady. This was a surprise because I thought they were stowing the equipment for the weekend on Friday. But no, it was late in the season and they weren't wasting any time shaving and paving the road surface. We were at the front of the line, so I got out and talked to her. She said they were doing about two kilometers a day. 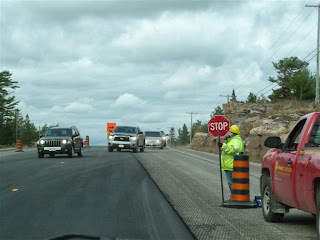 When we were finally cleared to move again, we proceeded through a couple of miles of single lane road while they laid and rolled fresh asphalt on the other side. This was being done by Miller Paving, an outfit I have come to respect because of the high quality work they do. 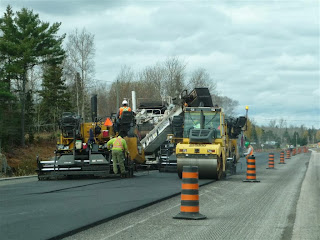 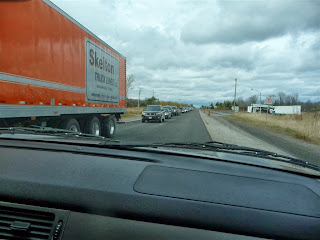 The highway was grooved as far as the Highway 522 intersection and then was good for the last fifty miles into Sudbury. I listened to the NASCAR Martinsville race on the satellite radio as we drove along. We arrived home about 3:30, glad to have made the trip to participate in a significant moment in our family's history. 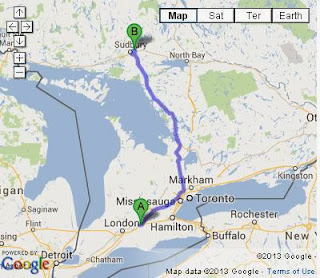