Sandy and I got down to the breakfast room a little after 7:00 AM. A few were already there and others wandered in while I was chowing down on more biscuits, gravy and sausage. I wonder why I can't lose any weight? There was some talk about going to a gorge today but I didn't pay much attention at the time. After we ate, Sandy and I went back to our room so I could look after a few chores. Blogs, bills, that sort of thing.

I guess I lost track of time because, when I looked, it was 10:00 AM and I saw that the bikes were gone. The central hallway acted as an insulator so we didn't notice any departure activity. Now what did they say? A gorge? The only gorge I was aware of near here was the Red River Gorge close to Natural Bridge. We went there during WWR in 2009, so maybe that was it. Regardless, it would be a nice drive.

I put our fate in the hands of Mr. Garmin, gave the GPS the Natural Bridge State Resort Park as a destination and just followed directions. This can be problematic if you are trying to cover some ground but can also be fun if you are just wandering. The GPS took us east on Kentucky 52 to Irvine, north on Kentucky 82 to Clay City and then southeast on the Bert T Combs Mountain Parkway. After a quick stop in Stanton for fuel, we continued until we exited the Parkway on Kentucky 11. The Natural Bridge access road was a short way up 11.

The Natural Bridge parking lot wasn't very full when we pulled in. However, there weren't any familiar looking motorcycles so we prepared to pull back out and look elsewhere. Just as I put the car in gear, a line of bikes led by a blue sidecar outfit and followed by a red Slingshot appeared and pulled in to park. We found them or they found us. Didn't matter. If they had been five minutes later, we would have missed them altogether. 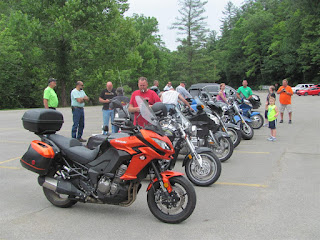 Look who we found

Looking around the parking lot, we saw one different looking vehicle. It carried the name Global Roamer 2 and had a link to their blog lettered on the side. They are from Australia and spend their time wandering all around the world, as the map and licence plates can attest. 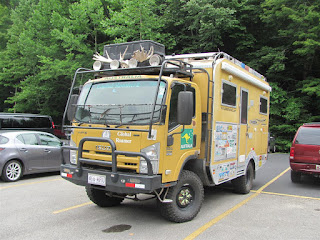 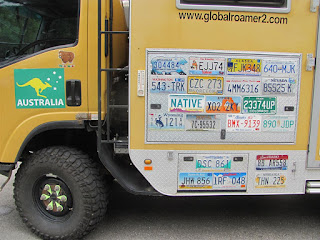 These were only a few of the licence plates 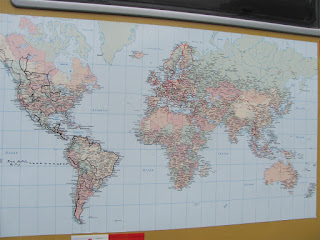 The group decided they wanted to see the Natural Bridge. There were two ways to do this. You could walk up the long, steep trail to the top if you were fit and ambitious. Being neither of those, Sandy and I joined the rest of the crew and bought tickets to ride the Sky Lift to the top. Round trip tickets, since walking down can be as bad as walking up. 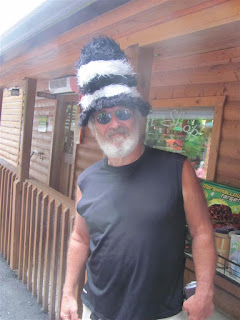 Wrong Turn - I think the hat suits him

Sandy and I don't like heights. It's a toss-up as to which of us don't like heights more than the other. But we can sometimes distract ourselves when we need to go somewhere that isn't flat land. Today, we distracted ourselves with just about anything that didn't involve looking down. 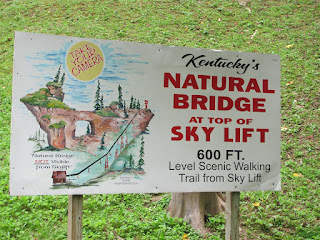 Our way to the top 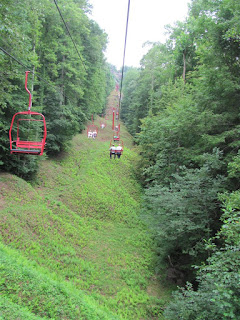 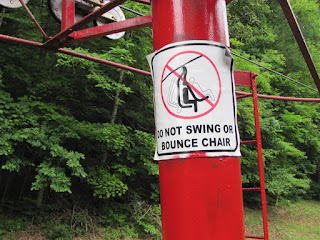 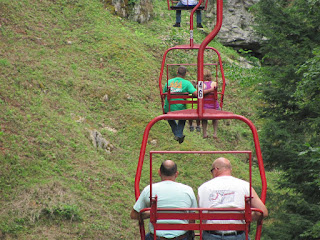 Big Dawg ahead of us and Phillip, Jaime and Caleb ahead of them 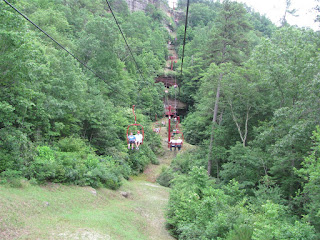 The grade gets steeper and is almost vertical at the end 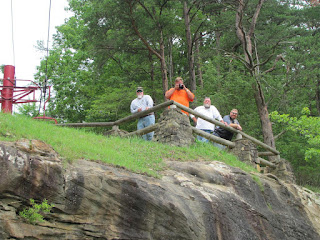 Once we got to the top (it took a while because the Sky Lift kept stopping for short periods of time), we walked over to the top of the Natural Bridge, a large sandstone arch. Some of the group went down below but we waited above. There was another point that offered a view of the arch from the side. 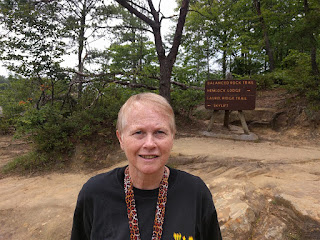 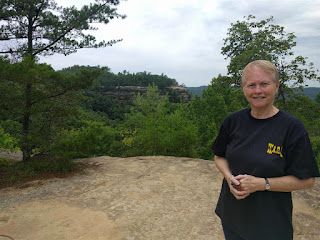 Standing atop the bridge 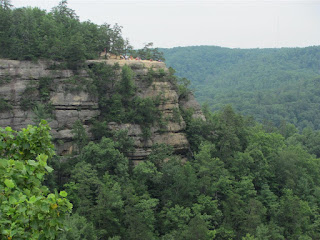 After looking around, we decided to head back down. The Sky Lift left the station and started straight down before leveling out somewhat for the rest of the ride to the lower station. 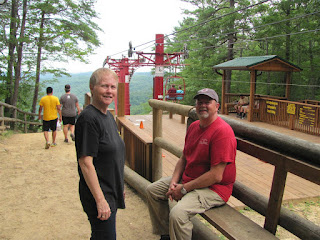 Sandy and Tbone ready to descend 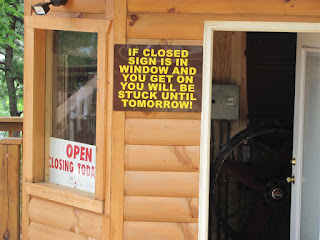 They mean stuck ON THE CHAIR 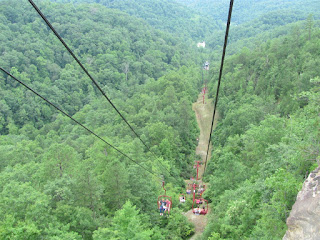 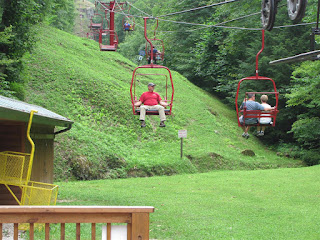 When we all convened back in the parking lot, the consensus was that we were hungry. There was a DQ back in Stanton that everyone agreed that would do the trick. Everyone except Wrong Turn and KT, who were still on the mountain. We left a note on their motorcycle and they caught up to us in Stanton..

The DQ was nice and they had a $5.00 special consisting of burger, fries, drink and a sundae. Then the group headed south on Kentucky 213, which I would put on the list of great Kentucky motorcycle roads. It had the right amount of twists and winds and I even had fun chasing the group in the Equinox. We got to watch Stewey and Cheap B play, dropping back and then riding hard to catch back up again. When we reached Kentucky 52, everyone turned west and returned to Richmond. We arrived just before 4:00 PM. 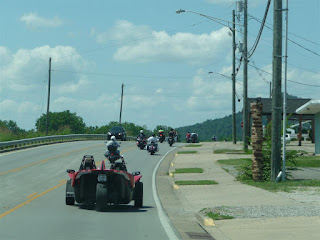 The road back to Richmond

In the parking lot, we saw a pickup truck with a Kawasaki KLR 650 dual sport motorcycle on a rack across the back. I just had to look and, sure enough, the whole rack and motorcycle were being carried by the hitch receiver. That seemed to be an excessive amount of weight, but it appeared to be working for him. 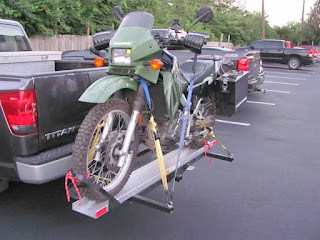 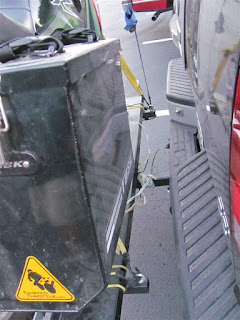 You can see all that is holding it up

In the room, Sandy discovered that Facebook Messenger now allowed her to phone other Messenger users via WiFi. That is tablet to phone. She did this despite me telling her it wouldn't work. She called KT and then the two of them called Sherm in Arizona to verify the service. Wow, new things every day.

Tomorrow, Sandy will be 65 years old (although you would never know that by looking at her). I had asked Cargo before we left to come down here if we could have a group supper to celebrate since we would be on the road tomorrow. Cargo said sure. This morning, we talked and I decided that Sandy would probably like Olive Garden.

Cargo called and found Olive Gardens didn't take reservations. He went over before 6:30 and asked for a table for 22. We followed a little while later and they were still setting up. The staff had good senses of humour as we joked with them. The manager, a middle aged lady, was particularly friendly. 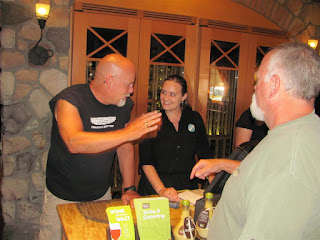 Eventually, we were escorted to a large table. Still, they miscounted and we needed a second small table. Sandy got to sit at the head of the big table and hold court. After the entrees, the staff brought out a birthday cake that Phillip, Jaime and Caleb had gotten. It had a personalized birthday greeting and a picture of a motorcycle on it.

All in all, it was a memorable way to spend a milestone birthday. Many thanks to Cargo for the planning, Phillip, Jaime and Caleb for the cake, KT and Wrong Turn for the meal and everyone else for sharing the celebration. 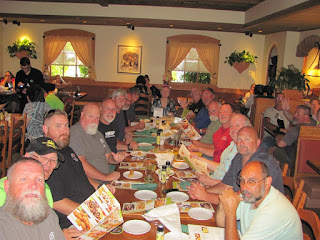 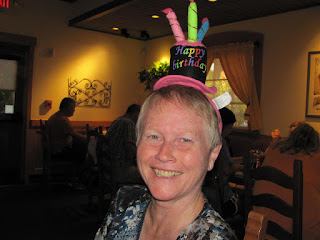 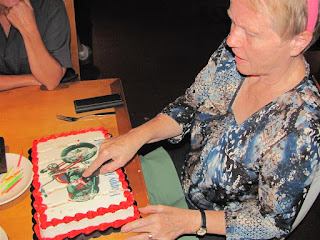 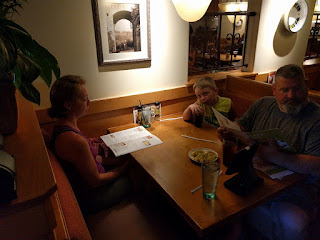 After supper, we returned to the hotel and hung out in the parking lot. Some of us had long drives tomorrow so we didn't stay up too late. The one notable moment was when a large white rooster (about six feet tall and dressed in a white T-shirt and shorts) made a quick run around the group crowing loudly. It got away due to the surprise factor, but there were promises that if it retunrs in the future, it will end up deep fried.

Sandy and I packed our bags and put some of them in the car before we turned in for the night.