We were awake a little after 6:00 AM and joined a few others at the Waffle House next door at 8:00. Phillip and Caleb, who live about 35 miles away, joined us there. The waitress was quite laid back but the staff, one and all, were very friendly. I can't say I was a fan of anything they had on the menu. 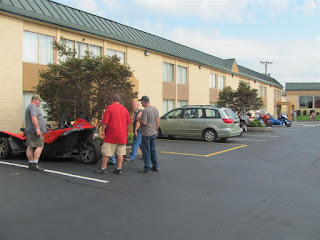 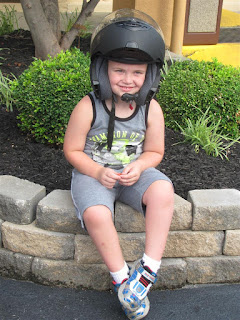 Caleb is ready to ride

The group of motorcycles, followed by a Slingshot and an Equinox, rolled out of the parking lot at 9:30 with Cargo in the lead. They said we were going to Cassius Clay's home. I was thinking boxer but we were really headed a little ways north to White Hall State Historic Site, the home of Cassius Marcellus Clay, an abolitionist politician from the 1800's. 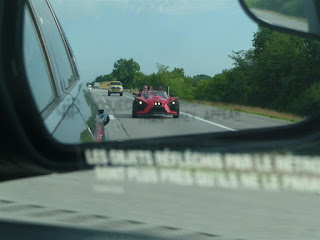 Our turn to not be last 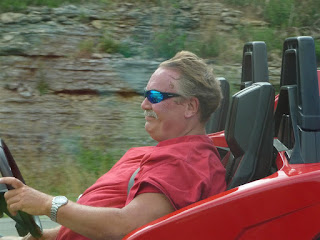 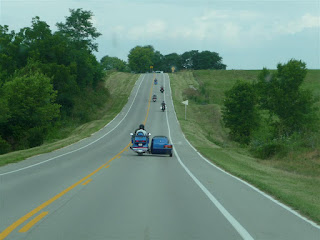 We didn't go inside the Clay mansion but the grounds were very pleasant so we wandered around taking photos. Cassius Marcellus Clay was one of the earliest southern planters to come out against slavery and even started a newspaper in Lexington in 1845 promoting abolition. This led to death threats and vandalism, so printing was moved north to Cincinnati. He was one of the founders of the Republican Party and a friend of Abraham Lincoln. The stories of these and other exploits (soldier and statesman) make me think that this was a man whose story should be much better known than it is. Hollywood, where are you? 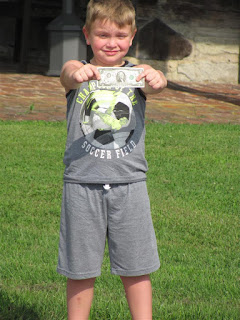 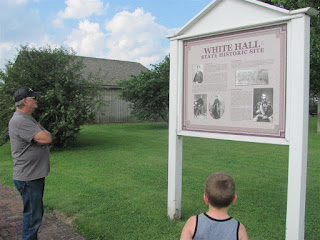 Bass Man and Caleb read one of the historical markers 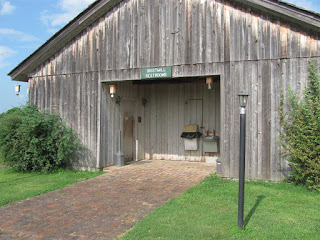 Even the restrooms fit the period 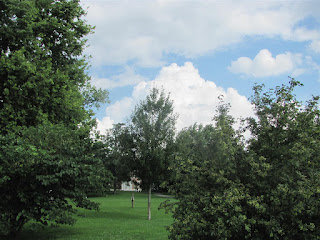 Things were so green 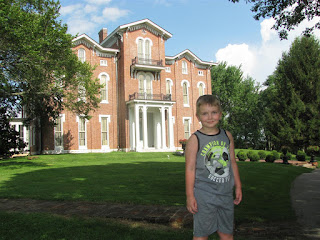 Phillip (and Caleb) led the next stage of our journey. We took I-75 south back to Richmond where we got off and continued south on back roads. The countryside around here was green, rolling and very pretty. Eventually, we arrived at Berea Old Town. 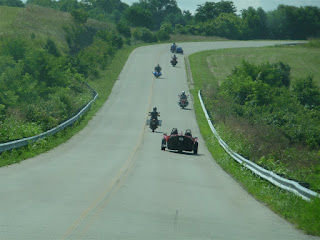 Everyone chasing the sidecar 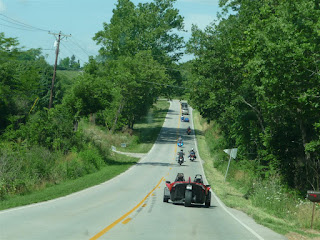 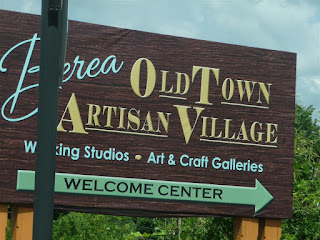 We have passed Berea, Kentucky many times on I-75 but have never stopped in. My mother had an experience here years ago on her way home from Florida when she stopped due to torrential rains and had a near miss with a Tornado, but that is the sum of all I knew about Berea before today.

The Welcome Center in the old train station in Old Town was very nice. A lady named Wendy explained that the town of Berea was founded on land given by Marcellus Clay and that Berea College, the first interracial college in the USA, opened here in 1855.  It remains a non-denominational Christian school that draws most of its students from lower income families in Appalachia and charges no tuition for its four year undergraduate programs.

Wendy explained that Berea College was heavily involved in the arts, a theme that ran throughout the whole town. She also said that we should avoid the back roads after dark due to dangers from moonshiners and wild dogs. The town had been dry, no alcohol available whatsoever, but now was becoming moist with some eating establishments having a limited selection of adult beverages available.

Since it was near lunchtime, Phillip suggested that we head over to the Boone Tavern for lunch. 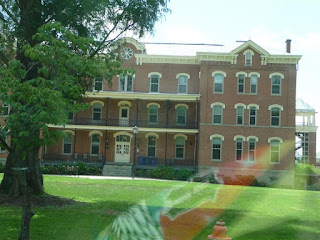 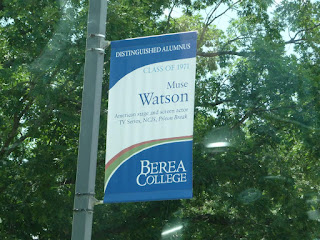 The college celebrates its alumni

The Boone Tavern was busy. We found parking spaces in the back lot as a tour bus was disgorging its passengers and we all immediately thought of Stonewall, who drives tour buses out of Toronto. The tavern is quite impressive, just over 100 years old and owned by Berea College. Despite its name, it is not a drinking establishment. Students make up 50% of the staff. 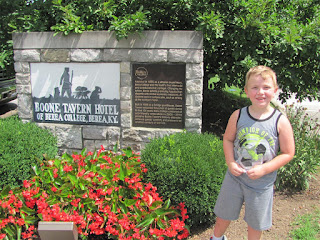 Caleb at the Boone Tavern 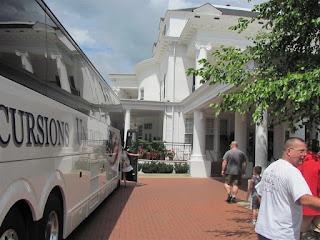 We didn't eat at the tavern. After walking through the lobby to the street side, we went down the block to PapaLeno's where we managed to get a table that seated all of us. I ordered chicken noodle soup and got a large bowl with much chicken, many noodles and a bit of soup. I'd recommend it. That was followed by a chicken salad sandwich. 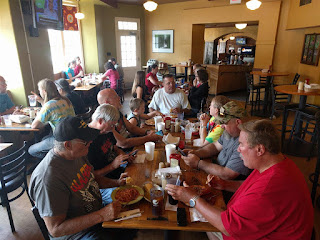 After lunch, people were checking the weather radar on their phones and discussing the nasty looking storm cell approaching Richmond from the west. We hot-footed it back to the Boone parking lot and headed out to I-75 as briskly as we could. 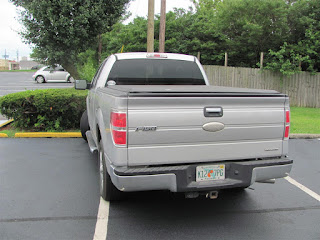 Florida driver - what can I say?

There was a severe thunderstorm watch in place as we rolled north on I-75. We could see the black clouds coming in but just caught a few heavy drops as we exited the freeway. There were a few fancy moves as the bikes went around a beer truck that was blocking the hotel entrance, but we in the Equinox didn't care. Roofs and wipers will do that to you. 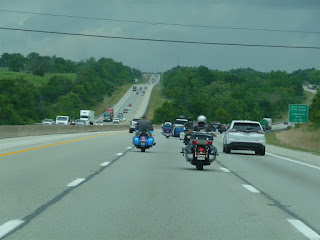 Racing the storm to Richmond

We spent some time sitting by the large indoor pool while Caleb swam. His mom Jaime arrived after having completed her work for the day and joined him. Later on, Stewey took Jaime and then Rainman, for rides in the Slingshot. 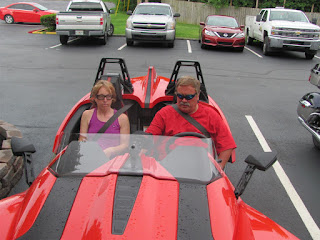 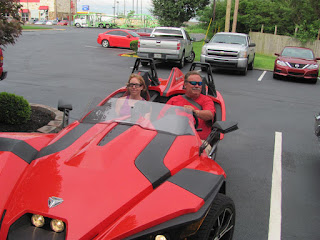 All smiles coming back 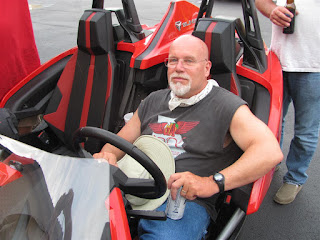 What is Rainman thinking?

For supper, we walked next door to the Cook Out, a place that does hamburgers, hot dogs, chicken and sides. I had a burger and hushpuppies. The food was good and the staff were enthusiastic, but they were young and a tad uncoordinated. They probably could have used a little manager guidance.

After supper, we ran into the central hall problem in the hotel. More folks had rolled in and there were now too many of us for the small room adjacent to the lobby. Showing how the hospitality industry is supposed to work, the desk clerk opened the very nice breakfast room for us to socialize in.

Wait, the breakfast room had buffet style warming trays. They had a full hot breakfast? What were we doing at the Waffle House this morning? Tomorrow would be different. In the meantime, we visited and swapped stories. Tomorrow we were supposed to follow part of the Bourbon Trail to some legendary distilleries. 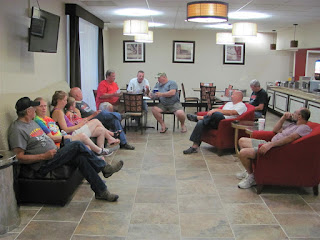 Again, we didn't stay up too late. I get a lot better sleep when we are on the road. 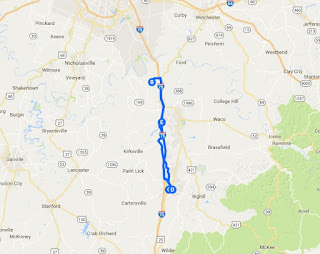