We were in no rush this morning. After a leisurely hotel breakfast, which included scrambled eggs and link sausages for me, we were on the road just after 9:00 AM.

It was Monday morning so we avoided Toronto by taking Highway 24 to Airport Road and then Highway 9 to 400 North. We did stop at the Tim Horton's in Erin for a bathroom break and, while there, Lorna got an apple fritter. One more stop at Tim's near Parry Sound and we were back in town before 3:00 PM.

While we were on the road, Sandy's cousin Marie phoned. It seemed that Sandy's mother Jan had called Marie to say that she had broken her glasses. Sandy noted last week that Jan was wearing her old glasses so her new pair should be in a drawer. Once we arrived in town, we went directly to the Extendicare York nursing home and found the good pair of specs for her. Sandy will consult the optometrist regarding repair or replacement of the backup pair.

We left Extendicare a little after 4:00 PM but the final leg of our trip was not without event, as the next post will explain. 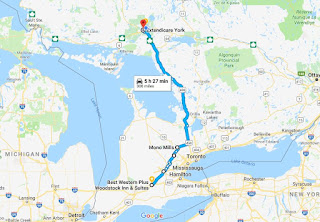