The Freedom Riders Motorcycle Association holds monthly meetings, usually on the second Sunday of each month. Usually, members go for lunch afterwards. In the summer months, they like to ride. Today, President Rob decided the club would ride to the village of Killarney to eat.

Although the official Town of Killarney has grown geographically to cover an extensive area, most people live in the original village. The community is only accessible by land via a 40 mile road that connects to Highway 69, although it has an airport and marina facilities. Prior to 1962, water and air were the only means to get there and, throughout the 60's, it was operated as a camp by the Fruehauf Trailer Company of Detroit. In the summer, it was part of the lifestyles of the rich and famous. The road allowed the rest of us peasants to gain regular access. 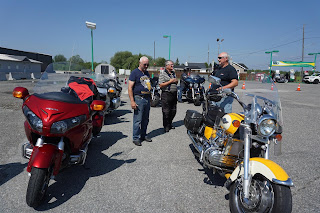 After a fuel stop, the ravening hordes of Freedom Riders headed south, following Highway 144 to Highway 17, around the Southwest Bypass and then south on Highway 69. 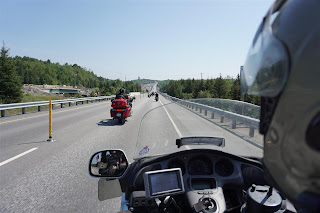 The construction zone on Highway 17 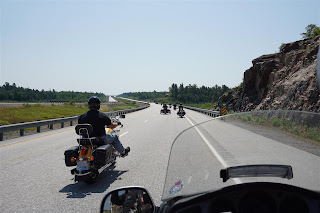 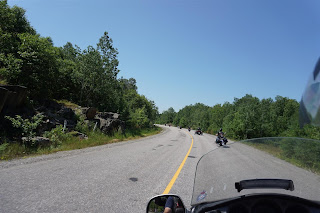 You need to understand that highways in the north take an awful beating due to the freeze/thaw cycle in the winter. The Killarney Road was a perfect example. According to Wikipedia, "it travels eastward through the barren wilderness of the Canadian Shield, passing through lakes, swamps, forests, and rocks" for 42.1 miles. Dips, bumps, frost heaves and broken asphalt provided us with an opportunity to work on avoidance skills. There were some OK spots but there were more that were not OK. If the road was resurfaced, it would be an awesome ride.

The temperature as we rode toward the village was 90 F, but that lowered to the mid-70's as we approached the water.

We arrived in the village and went directly to the Killarney Mountain Lodge. They had room for us on the patio, so we settled in and arranged the large umbrellas to provide shade. 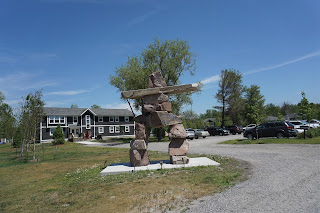 Sandy had a Caesar salad for lunch while I had a buffalo burger, bacon, cheese and all the trimmings except the bun and a side Caesar. The food was good (not inexpensive) but our server, a young man probably working for the summer between university terms, got quite confused. If he was pursuing higher education, I could only hope it was not in business or any other field that required attention to detail.

After the meal, New Guy Dave and I decided we didn't want to ride back in the large group. We left while the others were still exploring ice cream options. Instead of the 50 MPH we rode out at, we returned at 65-70. The little bumps were less noticeable at speed, but the big ones were more severe. Luckily we were able to dodge the worst of them.

Once we reached Highway 69, we headed north until we reached the Estaire exit. From there, we rode to town on Old Highway 69. This was the main road until they built the four-lane a decade or so ago. The scenery brought back a lot of memories.

Dave lived near us so we finished by riding the Southeast Bypass. He honked and waved as we turned into our subdivision. It was good to ride with the club but I don't think we will be rushing back to Killarney anytime soon due to the road. With construction to the west and more to start to the east, the Ministry of Transportation is limiting our riding options severely. 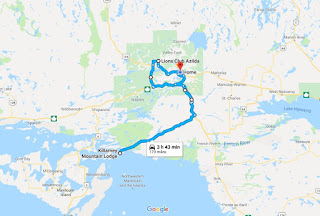