It has been a month since I posted anything in the blog. During this time, we have experienced the hottest, driest summer I can remember. There were very few days Leo and I could not golf.

Golf we did, arriving at Cedar Green Golf Club before 7:30 many mornings and heading out on the course before almost anyone else. Two of us could finish nine holes in less than an hour and a half. I just wish my skill was up to my speed.

After plotting my gym activities on a chart, I realized I haven't spent nearly as much time working out over the last fifteen years as I thought I did. When I did go, it was typically for 7:00 AM under the belief that if I didn't go first thing, I wouldn't go at all. A couple of weeks ago, I found that I could go after finishing golf and enjoy it just as much. This was important because my doctor told me regular workouts would be the most effective thing I can do to stay alive longer.

After the June trip, my latest battle was getting my blood sugar down. I discovered last year than any starchy foods, even whole grain breads and brown rice, have been driving my glucose up significantly. During the spring and early summer travels, I had slipped off my almost no carb diet, which resulted in morning glucose readings in the 13 range (230). After returning to a rigorous Keto-like diet at the start of July, the levels gradually came down to the mid 7's (135) and daily averages are just over 100. So when you see me chowing down on things like hamburger with no bun and veggies instead of fries, you will understand why.

The bike didn't get the workout I hoped it would this summer, however, I still consider most of the roads around here to be pretty boring. After a realization on the ride to Muskoka last month that affected my riding technique, which had never totally recovered from fourteen years of sidecar driving, I was enjoying what riding I did more than ever.

On the August 1st weekend, Tom, Mike and I flew the Freedom Riders banner to Manitoulin Island and back. On the last leg home, the trusty GoldWing died, leaving me on the side of the road with everything pointing to an electrical issue. This was my first roadside stranding in over 300,000 miles. The last time was in 1988 on I-94 25 miles from Glendive, Montana when my 1980 GL1100 stripped the driveshaft splines. 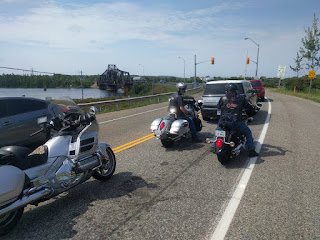 Waiting for the bridge at Little Current 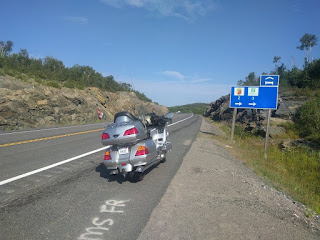 Broken down on the Southwest Bypass

My new Good Sam Roadside Assistance worked. Boyuk Towing sent a roll back with a Condor dolly. The operator had never used this device before, so we explored it together and got the bike to my driveway.

I had hit a severe bump before the failure, so I suspected the battery had developed a short but a new battery proved me wrong. Then I loaded the bike in the trailer and hauled it to NorthStar Recreation, where they were able to get at it quickly. The armature in the alternator turned out to be bad, the first failure in 261,000 kilometers to cost me money. Can't argue with that. Al the mechanic replaced it with a new OEM unit and I was on the road again. hank you, NorthStar. 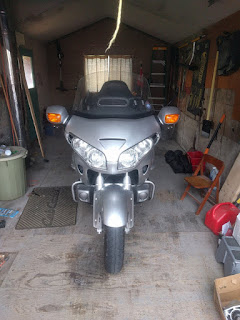 Back home and running again

Now it is mid-August and we are in the latter days of summer. Forest fires have been rampant, including the large Parry Sound 33 south of the French River and west of Highway 69. Almost everyone has been praying for rain and people are wondering whether this is the type of summer we can expect in the future.