A long time ago in a land far away, there were snowmobile trails.

We bought our first sleds in 1978 and got involved in organized snowmobiling a decade later, just as the Sudbury Trail Plan Association was getting underway. STP was a cooperative of eight local snowmobile clubs that, back then, operated almost 800 miles of trail in and around the Sudbury Basin. I was variously Vice President, Vice President - Operations, President and Ontario Federation of Snowmobile Clubs District Governor. I was also, with Normie Hein and OPP Sgt Lynn Beach, a co-founder of the Snowmobile Trail Officer Patrol and served as Special Constable STOP Officer from 1992 to 2010. During this time I was Operational Manager (STP) of the pilot project from 1992 to 1995 and Provincial Coordinator (OFSC) from 1995 to 1999. Organized snowmobiling was populated with some of the most dedicated volunteers and the finest people to be found anywhere.

Over the past few years, one of the key provincial volunteers from my era, Marilyn Streeter, had been tracking down and staying in touch with a number of people. She started with OFSC Life Members plus Board and Committee members. She held a reunion last year that we missed due to other commitments, but I was bound and bent that we would be there for the second one this weekend. Marilyn lived on the edge of a hamlet called Holstein on a county road in southern Ontario that we had never been before.

The gathering was to be held Saturday afternoon, with an additional brunch on Sunday morning. Sandy and I decided to go to London and catch up with old friends on Friday, then visit with grandkids and spend the night in Woodstock. After the trip to Holstein on Saturday, we would return to Woodstock for more visiting and spend another night. Then we would stop by for the buffet on our way home on Sunday.

We were rolling at 7:50 on Friday morning. My no carb diet meant no fast food today. Because it was Friday and we were going to London, I planned to take back roads to avoid Toronto. The ETA according to Mr. Garmin was 2:00 PM. 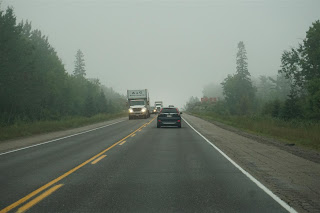 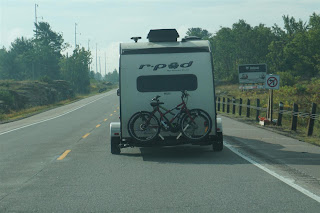 The overhead electronic COMPASS sign at the Pickerel River told us the southbound Highway 400 was closed at MacTier. This was pretty vague since MacTier is not on Highway 400. But, unlike further north, we had options that did not involve hundreds of mile detours. 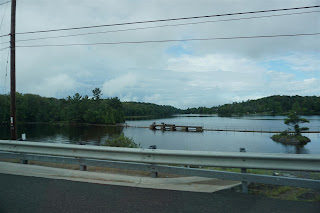 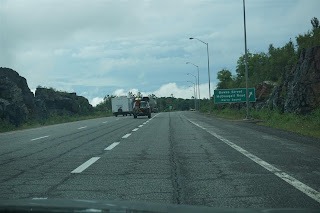 After stopping in Parry Sound for a bathroom break at McDonald's, where I replenished my coffee mug and Sandy got a smoothie and muffin, we continued south on Old Highway 69, AKA Lake Joseph Road. A quick check with the Ministry of Transportation website advised that the interchange where Lake Joseph Road rejoined Highway 400 was where the wreck was.

There was some nostalgia driving Old Highway 69. This used to be the main corridor south and every curve reminded me of one story or another from the decades of traveling here. With the south end of Lake Joseph blocked, we swung onto Highway 169 at Foots Bay and followed it to the little cottage community of Bala, From there we took Muskoka County Road 38, which wound and twisted its way back to Highway 400 south of the roadblock. This is a fun road on a motorcycle and can be enjoyed even in an Equinox.

We did note along the way that a couple of maple trees were starting to show a bit of red. It was too early for this kind of nonsense. 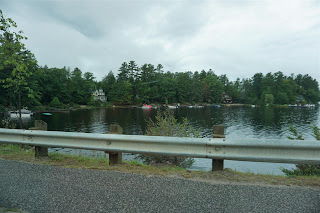 It was raining steadily when we reached the 400 so my regrets at not having the bike of 38 quickly dissipated. It rained off and on all the way to Barrie, where black clouds resulted in a wall of water and virtually no visibility through the city. As usual on a Friday afternoon, the northbound lanes were packed with slowly crawling vehicles as the city folks tried to escape for yet one more weekend in cottage country. 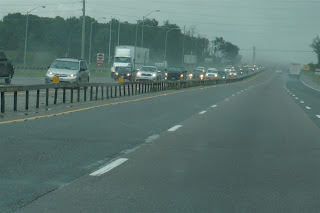 We stopped at the southbound service centre at Innisfil for a bathroom break. It was lunch time but the food court was very crowded and the lines too long, so we rolled on. I took the next exit at Highway 89 and we stopped at a quiet Tim Horton's in Cookstown. Sandy had an Iced Cappuccino while I ate a large serving of chili. Note to my southern friends: Tim's chili is basically ground beef in a tomato sauce. No fire, no heat. But no carbs either. 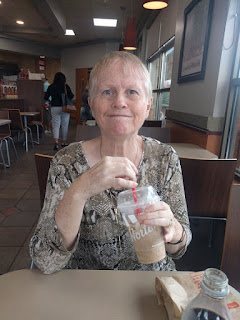 It was dry as we continued west on Highway 89 through Alliston, Potato Capital of Ontario and home of a huge Honda car plant. We continued on to Mount Forest. We had not been this way in many years and I noted Mrs. Mitchell's Casual Fine Dining establishment in Violet Hill. I don't remember this from before but you can be pretty sure that a stylish restaurant like this in the middle of nowhere must have something going for it to attract customers. I will put this on the bucket list for some future trip. We noted that most of the many wind turbines around Shelburne were idle despite steady wind. 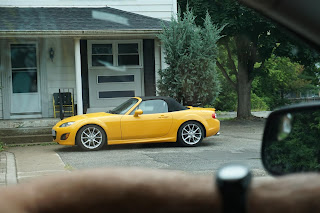 If only they had more luggage capacity 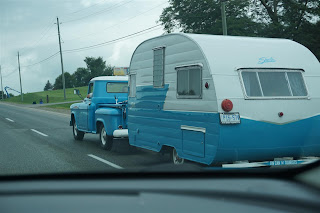 Tin Can Tourists (according to the bumper sticker) 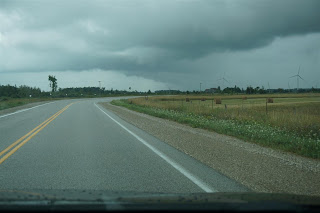 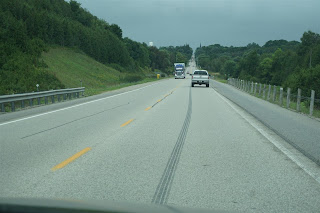 Not much of a motorcycle road 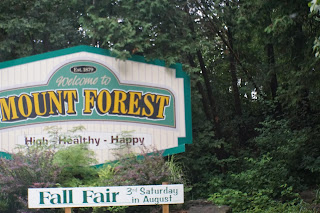 From Mount Forest, we cut south on CR 6 to Highway 9 and west to Palmerston. Then it was southwest on Highway 23 to Highway 7 and south on Highway 4 to Arva, one of the homes of my ancestors. John and Lorie Grandmont lived not far from there. 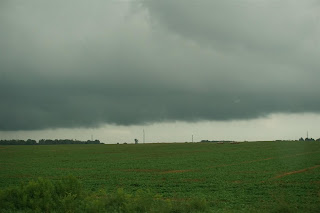 No need for sunglasses

John and I go back to high school where we both played in the concert band under the direction of (Uncle) Frank Elliott. I played the bass clarinet while John played the tuba. It was a good band, winning competition after competition in southern Ontario and taking several trips of varying notoriety. I believe we were banned from the Lord Simcoe Hotel in Toronto after only a one night stay. I left school just before the band departed on a tour of England.

There was one major musical difference between John and I. He had real talent while I just struggled to get by. He mastered most instruments and wrote some songs, including the Lasalle Court Massacree. This was a takeoff of Alice's Restaurant commemorating the night his brother and my brother (best friends to this day) had a party that attracted every on duty police officer in Sault Ste. Marie. He also wrote and played an ode to a wood tick that managed to make its way onto the space shuttle as the B side of a tape with Roberta Bondar's high school song. John had gone on to replace Uncle Frank at our high school (Bawating) and taught at several others as well. His children Jesse and Leah are noted violinists.

We had not seen John and Lorie in years despite their close proximity to Heather and Tom. One of the objectives this weekend was to rectify this. We found John at home just after 4:00 PM and reminisced until it was time to collect Lorie at work. John had loaned the family car to Leah, so we picked her up in the Equinox and went straight to their favourite restaurant.

The Waltzing Weasel was an English style pub. Late on Friday afternoon, it was packed with happy people but they managed to find us a table for four right away. The menu boasted favourites such as fish 'n chips, roast beef and Yorkshire pudding, shepherd's pie and bangers and mashed. It also included some North American fare including wings and smoked ribs.

Sandy and I split the special, which consisted of a full rack of ribs and a half pound of wings along with Caesar salad. Not being a fan of sauces, we had the meats dry. The food was excellent and the one order was more than enough for both of us. It went well with the great company. 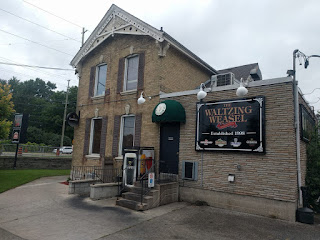 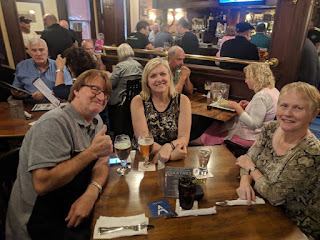 After supper, we dropped John and Lorie off and headed to Woodstock via Highway 2. I booked late so was unable to make a reservation at the Best Western Plus. Instead, we were booked in at the Days Inn, which proved to be more than adequate and added to my Wyndham Rewards points.

After checking in, we dropped over and visited Heather and Tom. Jasper and Fiona were still up so we had a chance to see them before they went to bed. We headed back for the hotel after 10:00 PM but agreed to be back around 7:00 AM in the morning.

I didn't make any effort to transcribe my notes or upload our photos from the day. Sandy turned in first but I took my Kindle to bed soon after and was asleep almost immediately. 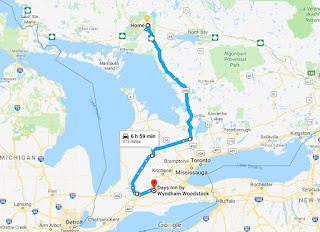