Every year, the Freedom Riders Motorcycle Association of Northern Ontario holds The President's Ride. This usually takes place over an extended weekend, but we went all the way to North Carolina over nine days in 2014. This year, President Rob planned a four-day three-night trip starting today to southern Ontario, with overnights in Midland, Guelph and Meaford. Because Sandy's cousin Lorna was visiting from New Zealand and we would be taking her to Cambridge and Woodstock on Sunday/Monday, we would not be able to participate in the whole experience.

I was intrigued by the first day ride from Sudbury to Midland with a wander through the winding roads of Muskoka District, Ontario's best motorcycle routes IMHO. The Wing had not been out of the garage since before our June trip and I needed some seat time, so I decided to ride down and through Muskoka and then return home. Sandy opted not to come along.

This morning, I checked the tire pressures on the Wing and rode over to get fuel. On the way, I encountered Kevin, who would be going for the whole four days, and we rode to the meeting place together. Despite a whole week of over 80 F days and calm, this morning was windy and only 55. This was a little chilly for my mesh jacket but snowmobiling had prepared me to handle the cool without flinching.

The ride was supposed to be Kick Stands Up at 9:00 AM, but we were also going to be presenting a cheque from the Club to the CNIB for $1,000 to help fund a local blind child attend their Lake Joseph Centre summer camp. The Freedom Riders channel any surplus from our  annual Freedom Rally to "local children's charitable causes" in accordance with our bylaws. The CNIB representative had been told a later time for the presentation, so we kicked tires in the Algonquin Road Tim Horton's parking lot while we waited. Several other folks also decided to ride for just the day. 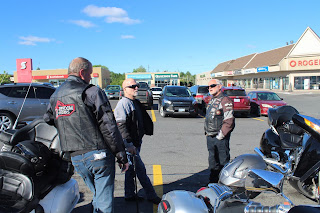 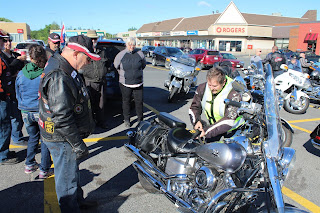 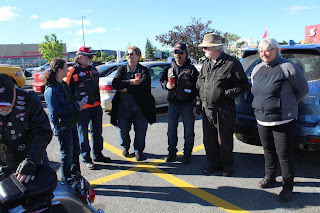 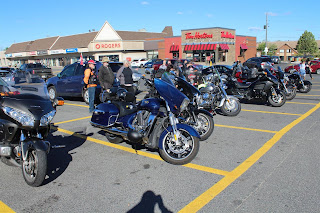 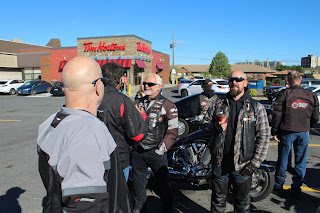 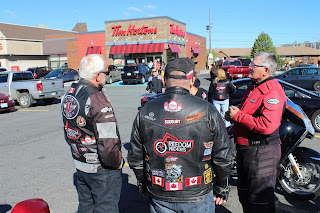 Some of us have more patches than others 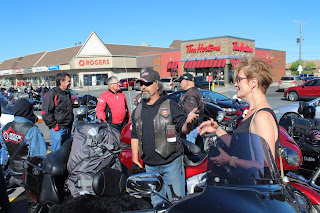 The lady from the CNIB is here 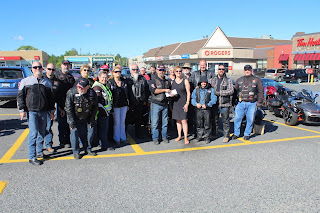 The Club is happy to support local kids

Once the cheque was presented, the Club headed south on Highway 69. Moving a group of motorcycles down the road is easy on a four-lane road. Unfortunately, once we reached the French River, we only had two-lane Highway 69. This whole highway was supposed to be four-laned by 2017 according to our previous Member of Provincial Parliament Rick Bartolucci and his Lying Liberal Government but, after fourteen years, the 100 mile stretch was only half done. Still, we kept the pace up and there were no problems.

Rob's first stop was at Still River, sixty miles south of Sudbury. On the highway, it consisted of an OPP detachment and a number of abandoned buildings. We pulled in to what was once a nice restaurant and motel. I remember riding down from Sudbury in the early 80's for supper. I think the stop was supposed to reflect the original theme of the ride, "ghost towns of Ontario". 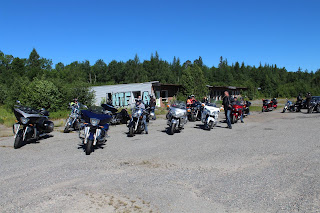 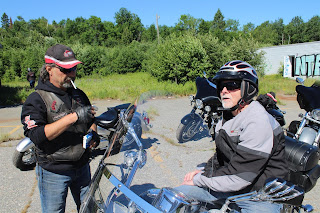 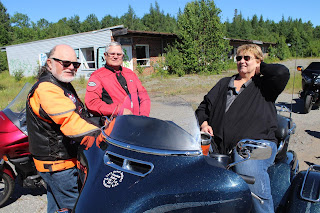 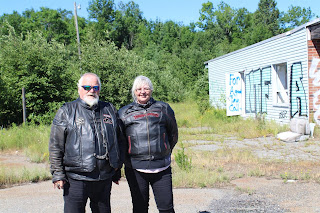 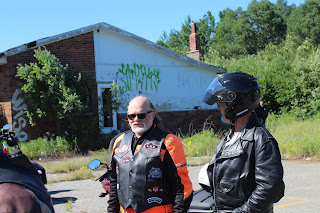 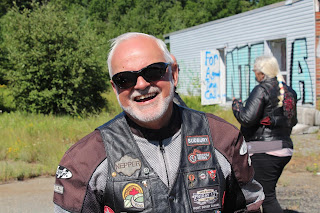 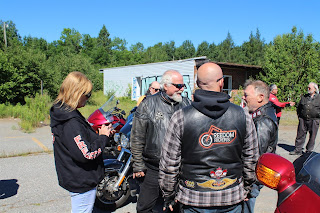 Continuing south on Highway 69, we stopped for gas at the Bowes Street Shell station in Parry Sound. Then we took Old Highway 69 to Highway 518. Members Jack and Cathay, who live on 518 in Seguin Township, had a very nice lunch set up for us. 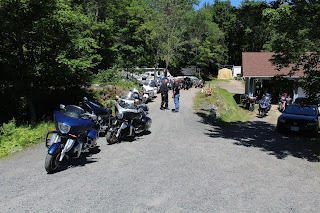 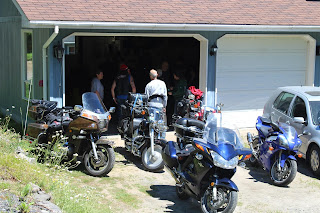 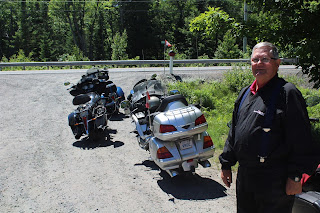 After lunch, the Parry Sound contingent led the way while the day riders fell in at the back. With me were Biker, Nepper, Leo and New Guy Dave. The whole group continued a little way along Highway 518 and then turned right on the Tally Ho-Swords Road, which wound through the small community of Swords to Highway 141. A left turn took us to Rosseau, a familiar crossroads. There, we turned right onto Highway 632 towards Port Carling, a road I had never been on before despite many rides through the area. Highway 632 became Muskoka Road 7 along the way and proved to be one of the best riding roads I have encountered in the area. There were 20, 30 and 40 KPH curves and good pavement, so it was fun to ride. If we ever get the Muskoka VROC Rally going, this will be on the must do list.

As the group approached Port Carling, we came to the intersection of Highway 118. This was another good motorcycle road where the main group would be turning east to follow a circuitous route that would eventually lead them to Midland. The five of us waved goodbye and turned west. A couple of miles later, we turned north on Highway 169, following it, Old Highway 69 and Horseshoe Lake Road to the Tim Horton's on Highway 400. 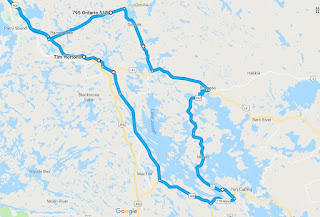 After fuel and lunch, we decided to ride straight back to Sudbury and go straight home. It was an uneventful ride, although the gusting headwinds caused a lot of buffeting. It was nice to be a part of the 2018 President's Ride, even if it was just for one day. 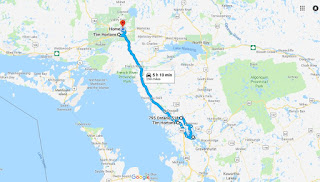