Since we were going to be down here for a few days, it was an opportune time to touch base with some old friends. This morning, we drove the short way to London to see a couple of people.

Pastor Jack and Deb ride a Gold Wing, are key members of the Christian Motorcycle Association and have been regular attendees of the Freedom Rally in Sudbury for many years. I sent Jack a message last week and he invited us to stop by their place for coffee.

The drive to London was brief and uneventful. We got to their house at 10:00 AM and were greeted on the front steps by a smiling Jack. Deb was out but came through briefly on her way to another appointment. Jack is now the lead pastor for all the CMA chapters in Ontario and Quebec and they have an active summer of traveling planned. He had heard about the demise of the Freedom Rally and expressed sadness that it would no longer be on their schedule, but he will always remain a close friend of the Freedom Riders. 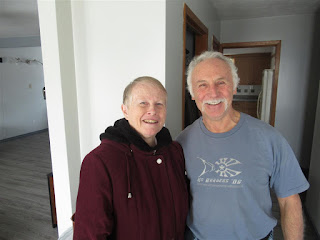 John and Lorie are also very longtime friends of ours living in London. In high school, John and I were both in the award winning Bawating Concert Band under the tutelage of conductor Uncle Frank Elliott (RIP). I was the middling bass clarinet player (the instrument was delicate enough that very few of us were allowed to play it) while John played a tuba. He had an aptitude for music and eventually took over from Uncle Frank for a while before moving on to other musical adventures.

John and I have shared a lot of bonds. We both lived in Hollycrest Subdivision in the Soo, both lost younger brothers in tragic circumstances and our other younger brothers remain best friends in that same subdivision. We are two of a very small part of society that believes it is proper to hang a lobster from the Christmas tree. It is always good to see him.

We picked John up at home just after noon and headed to a Kelsey's Restaurant where Lorie joined us on her lunch hour. Lorie was well known there and we had a great lunch while rehashing old times and sharing perspectives on the state of the world today. It was a good time but I was so engrossed that I forgot to take any pictures.

John and Lorie's son Jesse and daughter Leah have inherited their musical talent. Jesse has been producing musical shows that showcase his, and sometimes Leah's, virtuosity with the fiddle. His Fiddler On The Loose show will be playing at the Hamilton Family Theatre in Galt in early July. Jasper and Fiona will be a little too young to appreciate it but I think we will stop down on our way to the Black Hills and take the rest of the family.

Back at the hotel about 4:00 PM, I actually got changed and went down to use the treadmill in the nicely appointed exercise room. It had been over a year since I strapped on the heart rate monitor and I was disappointed (but not surprised) by the poor cardio performance. I did get in a half hour but it barely took my usual warm up level to keep my heart rate in the target zone. More work will be required.

After picking up McDonald's supper, we headed over to Heather's. Tom had taken both kids to the Community Centre so Jasper could participate in a Lego robotics workshop, so we headed over there. That is one nice facility and even includes two ice sheets (although one is older and hidden away). 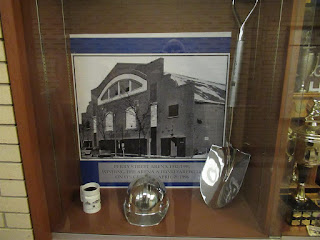 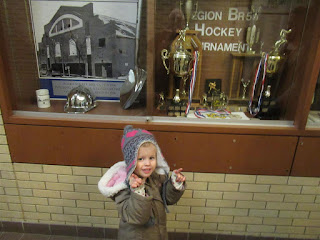 Fiona giving me two "thumbs" up

After leaving the Community Centre, Heather and I dropped Sandy at the hotel and headed to Cambridge for a gathering of the Church On Tap group. This is where members of the Cambridge Community Church get together on Thursday nights for refreshments and discussion on matters of faith, philosophy and friendship. Apparently, their subjects are far ranging and Mike thought they might get some mileage out of my Deist viewpoint. Heather came along because she enjoys this type of discussion as well. Sandy did not because she doesn't.

After picking Kim up, we arrived at Kelsey's (another one) on Hespeler Road right on time. Pastor Dan and Marilyn were already there and we were shown to a table. This was it for tonight. We discussed a broad range of topics and I enjoyed the company. If a person's faith helps them get along better with other people (for me, this especially includes respecting the rights of others), I am all for it. These people were like that. Maybe I was overly garrulous, though, because Pastor Dan texted Kim right after and wondered if I was always that talkative. 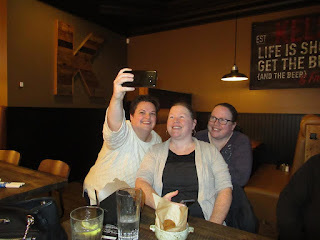 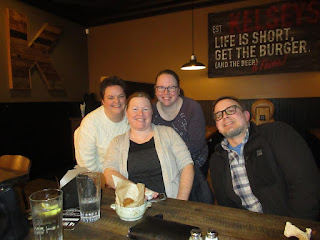 Bidding the others good night, Heather and I were headed back to Woodstock by 11:00 PM. It was a pleasure to discover that the stretch of 401 between Hespeler Road and Highway 8 had finally been completed. This has been a bottleneck during rush hours and now sported five and six traffic lanes westbound.

I dropped Heather off at the house around 11:30 and returned to the hotel and went straight to bed. 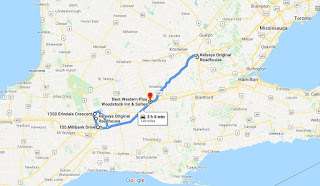