We rolled out of Sudbury just before 9:00 in the mini-van with the empty trailer in tow. Arrived just after noon at J&R Cycle in Stayner. There, out front, was a sleek silver GoldWing. And an ST1100 and a familiar face. Guns, a VROC friend from Toronto surprised us and presented us with a christening gift.

I paid for the bike and then test loaded it in the trailer to be sure it fit. It did with about 4" clearance in the rear. Unloaded it and gave John (the J of J&R) the Kuryakin Transformer boards to put on. We hauled the trailer down to Scott at the RV place to get the safety chains upgraded. Went into downtown metropolitan Stayner to register the bike with the MTO and move the VROC plate over to it. All went without incident.

We returned to J&R and got suited up. Checked tire pressures. Spent two minutes checking bike controls. Spent 30 minutes studying stereo, CB, intercom and display controls. Gave up on that and we headed out. 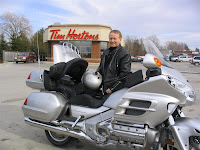 Stayner to Owen Sound to Cambridge. Only 260 Km's, but the temperature was dropping at the end. Arrived in Cambridge about sundown. Here's a picture earlier in the day.

First impressions? Smooth, powerful, nimble. It was a little too nimble at first when I had the rear suspension set pretty hard at 20. It got skittish in a strong gusting crosswind so, at one traffic light, I reached down and pressed the adjust button moving it down to 15. Then it hit the groove, and the handling became amazing. BTW, the first thing that drags is the outside of my boot:-))

Some time with the manual at Timmies helped me figure out the electronic controls. Damn, this thing even warns you if the bags and trunk are not latched.

Anyway, we will put some more miles on tomorrow and get it back for a change of break-in fluids. We'll be back here tomorrow night with the bike in the trailer and we will head west Friday morning.

Good luck with the new wheels. Enjoy your trip and stay safe.