Paying Our Respects To Tim

Tim's funeral was scheduled for Saturday at 10:30 AM in the small town of Hope Indiana, about 45 miles southeast of Indianapolis. The viewing was Friday from 3:00 until 8:00 PM. There was no question about whether we were going to be there. I booked a room at the Ramada Inn in Columbus Indiana for Friday night. 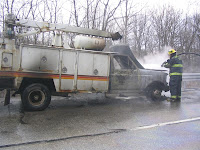 We left home in the van at 4:30 AM Friday for the 780 mile drive to Columbus. The pre-dawn morning delivered ice pellets and then rain as we headed west to the Soo. Traffic was extremely light at the border, considering that it was around morning rush hour. The US guard was a trainee and delivered his questions in a hesitant manner, which spooked me a little. The rest of the drive was uneventful except for the 1/2 hour we lost on US 127 north of Lansing due to a burning truck. The local fire department soon had this under control and we continued on. The weather had improved after we crossed the border and eventually I had to put the A/C on.

Hope Indiana is a tiny place. We arrived at the funeral home on Main Street about 6:30 PM and found a few other VROCers and a large number of locals lined up to get in. They told us it had been like that since the place opened at 3:00. It was obvious that Tim was as well liked everywhere else as he was in VROC. It was hard to see Katie, her daughter Rachel and her sons Mike and Daniel, but they were holding up on the surface. We paid our respects and then adjourned to the street.

Buck Prior led three other bikes (Stewey, Snubs and CC Rider) and us down the back roads to Columbus and our various hotels. We met up with some others and split for supper. Our group went to the prime rib buffet at the Holiday Inn while others went down the road to a sports bar. After supper, we all gathered in the Ramada parking lot. Later, as it began to rain, we stood under the awning in front of their atrium, drinking beer and Jack and reminiscing about Tim. The last to arrive, about 10:00 PM, were EZ, Scooter, Phin, Jax and Cargo. The first four, on bikes, were pretty wet. We were joined by Daniel, an Airborne soldier who happened to be staying at the Ramada as well. Most of the gang had retired by midnight.

Saturday dawned greyly. Those of us at the Ramada met in the breakfast area. Sandy and I checked out and loaded the gear in the van. Although the funeral was at 10:30, Evil had asked that the bikes arrive at 9:30 so we set a meeting time at the hotel of 8:30. Others had arrived after we went to bed including Willie Wonka and the lovely Carlene, in their truck. Shortly before we left, it started to rain. Doppler showed it to be a narrow but active front, and the riders got severely drenched on the ride to Hope. At the funeral home, the bikes were martialed behind the motorcycle hearse and the cars were lined up in the parking lot.

We eventually seated ourselves in the funeral home, but it became obvious that the place would be packed so the VROC contingent, without a word, gave up our seats to the local people and stood at the back of the hall. The service was conducted by our own Tommy "Rabbi" Wilcockson. Despite the name, he is an ordained Baptist minister and probably the finest man of the cloth that I know. He read some passages and a very touching letter Rachel had written her father. After some personal reminiscences, he called on anyone present to share any Snake stories. Black Chrome shared some touching words, and quite a few others spoke as well.

After the service, we moved outside and watched as they brought Tim's casket out and loaded it in the hearse. The rain had passed and the day was actually quite pleasant. As the procession got underway, the hearse was followed by the assembled bikes (the variety of state and province licence plates was impressive) and then a line of cars that extended for well over a mile. Katie road on a bike behind her son. The Sheriff's Department handled traffic at the intersections and almost every car we met pulled over and stopped until the last car went by. At one intersection, a uniformed deputy stood at attention and saluted while another in plain clothes stood with his hand over his heart.

The ride to the cemetery on a back road near Gnawbone was a long one. When we arrived, the cars and bikes wrangled to find parking spots and everyone proceeded up the hill to the grave site, which looked out over a pretty valley. The casket was carried to the grave and everyone assembled to hear Tommy speak the words. It was about as sad as a thing can get, but it was also inspiring to know that our VROC family will be there for each and every one of us when we need it. After the committal, people adjourned to the adjacent church for food, but we needed to haul so we said our goodbyes and (after getting several sets of conflicting directions) set out for home.

We were rolling north about 2:30. A gas and food stop in Fort Wayne told us the temperature was dropping. We drove straight through without event and arrived home at 4:00 AM Sunday morning.

Here are several sites with photos of the funeral: