Those of you who aren't in VROC but read my blog may have gotten the idea, correctly, that this is like an extended family to us. The people we have met here, converse with daily and visit with as often as possible are more than friends.

Tim "Snake" Acree, of Nashville Indiana, was one of these. Tim, 51, left us early this morning. After discovering his house on fire, he evacuated his family and then went back in to retrieve some possessions. The fire didn't get him, but he suffered a heart attack. A neighbor provided CPR until the Paramedics arrived, but it was too late.

We lost Kegs last September and Fred on New Years Day, but they were both fighting cancer and we knew it was coming. This time, it was a bolt out of the blue and I am stunned. All that Tim did for VROCers and VROC will live on in our lore and those of us who knew him will keep a part of him in our hearts. 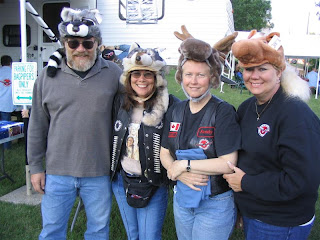 Pegs down, brother. Tim will be missed.