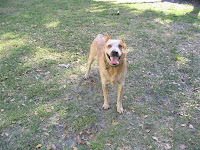 Scott and Margot were home when we got to the Hacienda. Their new dog, Taz, is an Australian Cattle Dog. Very intelligent, he had me trained to throw his favourite ball for him in no time. Since we arrived first, we staked out a bedroom and avoided having to set the tent up for this evening. Shortly after we got there, Cargo rolled in with his Nomad on a trailer. 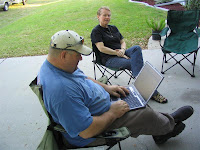 Scott has WiFi, so we configured the laptops with his security codes and got on line to check the mail. Various people were on line in various places and scenes like the one here, out front in the driveway, were common. We posted about our arrival in the Newsgroup and had multiple replies shortly thereafter.
The four of us skipped over to the shopping center where we grabbed sandwiches at Subway. Sherri, the girl behind the counter, was the friendliest Subway person I ever met. I will be calling their HQ to commend here. Then we hit the grocery store for beer, pop and ice. Maybe tomorrow, we'll head for a car wash to clean the filthy van. 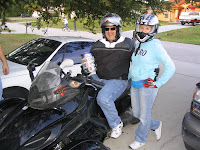 Jennifer, who lives in Palm Bay, dropped by on her 500 Vulcan. She's a school teacher and this is her first bike. She was concerned that people would say she had a 1/2 a Vulcan. I pointed out that the 800's were 1/2 Vulcans and hers was actually a 1/3 Vulcan. She now has an appropriately low opinion of me:-) Brad, who is testing a new Spyder vehicle for Bombardier Recreational Product, brought it by for us to look at. He had one of the optional seat covers with it. Her name was Amanda. We'll get a chance to try a demo out when we get home. 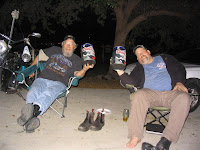 I phoned Sherm to say Hi. he's ready to roll out to Arizona for their gathering. This started a round of drunk phoning to a number of people. Luckily, nobody was really drunk since Scott and Cargo limited themselves to one beer apiece. Before it was done, we even had an incoming call from New Zealand. 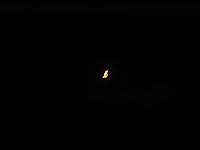 A Nashua New Hamshire transplant named Brian stopped by with his son Brian Jr., visiting from up north, and their ladies. It was a good thing they came by because they alerted us that NASA was shortly going to be launching an Atlas V booster with five satellites on board. We waited as they held several times and then, about 10:00, they fired it off. Expert watchers say it wasn't nearly as spectacular as the shuttle, but seeing the bright light go up (considering it was about 50 miles away) was pretty cool. This was the best picture I could get.
After the launch, people started to drift off to bed. In the end, Scott and I were putting away the chairs and marveling at the wonders of the VROC family.
Posted by Jim "Skid" Robinson on 3/09/2007