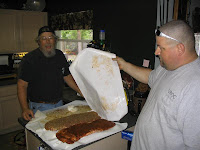 I woke up about 8:00 after a good night's sleep, but Sandy said I must have been tired since I was snoring. I guess I am still getting over the 60 hour period that I only slept five hours.

I grabbed a coffee and joined the crew at the table working on their various computers. I spent some time streamlining the start-up process and then got to work on the Blogs for the trip down. Scott and Cargo were working on a way to get the webcam on line so others could vicariously share the party with us. They achieved limited success. Then they got to work preparing some of the ribs for tomorrow's meal.

Cargo, Bayman and I spent a little time talking politics, a favourite VROC pastime. The discussion wasn't to contentious since we seem to be pretty much on the same page.

I was sitting outside when Judge and Cindy arrived from Georgia towing their bike. He pulled into the driveway next door and everyone headed over to say Hi. I walked across the yard barefoot and got a first hand lesson on sand spurs. These spiny little pods embedded themselves in the soles of my feet and, when I pulled out the full ones, they stuck to my fingers. Then we spent fifteen minutes with tweezers, a hemostat and Judge using a box cutter to get out the spines that had broken off. I will always wear shoes after this.

Inside, Cindy was checking the cabinet and found a jar of Peter Pan peanut butter. A quick Google and we found it was one of the recalled salmonella jars so no one had a peanut butter sandwich.

Skeeze pulled in from Georgia, bringing the total green/green Nomad complement to three. We sat around visiting as more people arrived. Slammer, Barb and their dog arrived by car from North Carolina and Steve from Chicago, resplendent in yellow, dropped by for a while. More people kept coming all the time and I lost track. One I did note was Billy G. from Florida because, although I didn't remember, we met up in New England in 2004 at both Laconia and Bethel Maine. Kudzu also arrived with a gang from Boca on his new (to him) 2005 GoldWing. 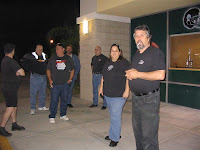 About 8:00 PM, we mounted up and headed down the road to Beef O'Brady's, a local popular sports bar. Kudzu asked if I wanted to ride his Wing and I took him up on it. They were busy so we waited outside until they had room for 25 people, but it was a perfect night and we didn't mind (see picture). Finally inside, we ate and a few people threw chicken bones and other odds and ends from table to table. 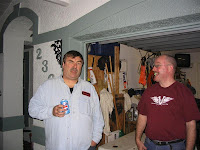 As we were coming out of the restaurant, another bike pulled in. It was Stewey, who rode in from Peoria Illinois. That was a real accomplishment at this time of year. Back at the Hacienda, Stewey enjoyed a celebratory beer while Kudzu looked on. The webcam, which had been up and down all day, we reconnected via Yahoo Messenger. The pictures were much better, but people needed to install YM to see them. As the evening progressed, people started to wander off to bed. Sandy turned in just before midnight, while Scott, Leo and I were the last to lay down about 1:30.