The journey began yesterday morning bright and early. It was -21, which was a great improvement from the -30 the day before. Sandy shook me awake about 5:30 AM and we finished stowing our gear in the van. Gary was waiting at 6:55 when we pulled into his driveway and we hooked up with Leo and Diane, in their own car, at 7:15 at the south end of town. Leo was driving Diane to Toronto to catch a flight to Mexico, and then he would leave the car there in the Park and Fly. He'll pick it up on the way home.

The road was wet and sloppy but, other than using a lot of washer fluid, the trip to Toronto was pretty good. We stopped at the new Tim Hortons south of Parry Sound for the first time. In Toronto, we went directly to the Quality Inn on Islington and waited while Leo and Diane took the short drive to check out the long term parking. Then we waved good-bye to Di and immediately found there was no westbound on ramp to the 401 from Islington. Lost in the first quarter mile. After wandering around the ground level, the third interchange we stumbled on had a westbound ramp and we were underway.

Traffic was light as we took the 401/403/QEW route to Fort Erie and the Peace Bridge. The US Border Guard took all four ID's. It was a little confusing because Sandy and Gary were in the back seat and, when I told him my wife was with me, he asked if Leo and I were married. I pointed to Sandy and he said with a smile that, since we had legalized gay marriage, they were never sure any more. Then he laughed and sent us on our way.

I drove to Erie on I-90, stopping for the first time at the new Pennsylvania welcome center in Notheast, and then south on I-79 past Pittsburgh to West (By God) Virginia. We were through Pittsburgh at 5:00 PM but didn't encounter much traffic at all. In southern Pa and northern WV, as the sun got lower, Leo kept counting herds of deer in the fields and on the hills. They stood out against the snow cover and I slowed a bit as it got darker. 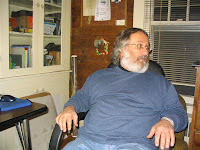 I called Jim 'Wrong Turn' Ayers on the way down to WV and found he wasn't going to make it to Florida. About 9:00 PM, we stopped at his place in Fayetteville WV to say Hi. He lives on Nickelville Road, so we felt right at home. Jim put coffee on and offered us muffins while his cat brutalized me every time I stopped rubbing his head. We talked about how he is going to cure his motorcycle infestation (four of them at the moment) and summer plans. There may be a West Virginia Wander in the cards. In the picture, Jim is relaxed in his computing chair.

We were within 12 miles of the half way point as we set out again with Leo at the wheel. Charlotte North Carolina is very pretty at 3:00 AM. Leo got us down to Columbia SC on I-77, over to I-95 on I-26 and then south the the Georgia line before sunrise. Gary took over the driving there. We stopped north of Jacksonville for breakfast. The Mickey D's was virtually inaccessible due to morning traffic, so we went to the Waffle House. It looks like we won't be doing that again. 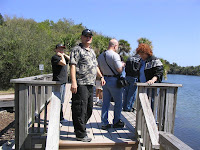 At Daytona Beach, we cruised down International Speedway Drive to Highway 1 amidst a pack of motorcycles. South on 1, we stopped at a DQ for ice cream and phoned Terry back home to tell him we had arrived. Going south, we followed a Harley with training wheels. Unlike the Voyager kit, this one still leaned. Gary got some video of it. The number of motels with vacancy signs out during bike week surprised me. We turned into the Merritt Island National Wildlife Preserve and stopped to see the Manatees. There was only one hanging out as, in the picture, the gang watched from the deck.

I phoned Gator and found he was in the hospital in Titusville for tests, so we stopped by for a brief visit. They're not sure what is wrong right now, but he was still a cheerful as usual. Here's hoping they get this sorted out because he's too good a man to keep down. We'll drop back up to see him again tomorrow.

Heading south from Titusville on I-95, we rolled into the Hot Sauce Hacienda about 2:00 PM.

One thing that annoyed me on this trip was the number of gas stations now requiring a Zip Code when paying at the pump. This makes it awkward for Canadians since our Postal Codes won't work and we must then prepay. That whole concept sucks.
Posted by Jim "Skid" Robinson on 3/08/2007