I woke up about 8:30 and found most of the others bunking here already up and about. Margot made biscuits and sausage gravy for breakfast. The sausage and gravy came out of a Campbell's can the likes of which I have never (unfortunately) seen at home. She augments this with another half pound of sausage per can that she fries up. It was an excellent start to the day.
I spent some time updating the blog and photos and then Gary, Sandy and I went over to the grocery store to get some ice. When we got there, we saw a yellow Suzuki V-Strom in the parking lot. As I suspected, there was a Texas plate on it so we knew that Coyote character from Dallas/Fort Worth had arrived. We tracked him down in the beer section.
Back at the house, I called Gator up in the hospital in Titusville. I hadn't been able to reach him yesterday, but he did answer today. He said he was up for company, so Leo, Sandy, Coyote and I motored up to see him. He was in good spirits and figured he might be sprung as soon as tomorrow since his system was behaving. The Docs didn't have a firm diagnosis but were leaning towards lactose intolerance. We had a good visit and then I got lost trying to get back to I-95. Checking the map, it appears I described a large figure 8 pattern through town and, fifteen miles later, I ended up back where I started. The GPS continues to look better and better.
We finally arrived back at The Hacienda about 4:00 and found many people and bikes in the yard. There was even an inflatable male doll sitting on one of the scoots. The Women of VROC had taken charge. Soon after we returned, the beef ribs, roast and pork loin which had been smoking all day were ready. Along with salads, veggies and other sides, we chowed down on some excellent food until everyone was full. Thanks to Scott and Sumo for some fine cooking. 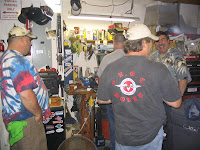 As everyone returned to the garage and driveway, they finally got the webcam working. Here, Cargo watches Kudzu tinker with the settings while Stewey laughs at something Scott is saying. The women were doing things to the doll (now named Snubs the lover of musicals) that Sandy says I can't post pictures of. Among other things, ring toss was involved. You had to be here. We also did a bit of drunk dialing and caught a few people at home.
Everybody was having a good time. Kopperhed and his wife Kelly (Flash) dropped by. They are from Oklahoma and had been here all week in Daytona. Finally, as the evening wore on, people started to wander off towards home or hotel. Stewey and Coyote left since they were riding out for Illinois and Texas, respectively, early the next morning. 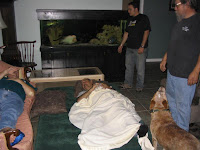 At the very end, about 1:00 AM, the denizens of The Hacienda decided to turn in. There were beds, couches and air mattresses spread throughout the house and people settled in for a good sleep. This photo shows Brad and Billy G. already down for the count as Dooley and Scott look on

We decided to delay our departure until Monday since we figure that none of the team will be on top of our game tomorrow.
Posted by Jim "Skid" Robinson on 3/10/2007