Woodstock Ontario to Cambridge Ontario and back again

For the third straight morning, we left Woodstock for Cambridge. I really appreciate the new Tim Horton's ham breakfast sandwich. It's a healthier choice than the sausage or the bacon. I prefer mine on the English muffin rather than the country biscuit.

At the house, we got out the inflatable pool that Tom and Heather had gotten for the girls. I broke out the 12 volt air compressor I carry in the van to save our lungs. 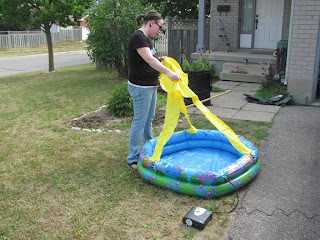 Inflating the pool
This pool is interesting. The umbrella top has a water line leading up to it which provides a shower for anyone in the pool. We got it aired up and moved it to the side yard where we put some water in it and connected the water line to the top. Jolene liked it and eventually we had Robyn and Mom in there as well. 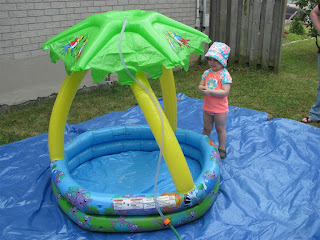 I'm not sure about this 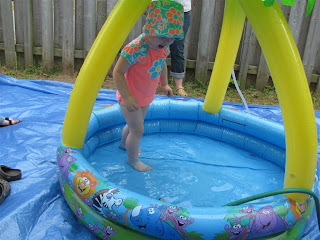 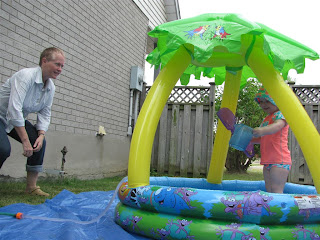 Look Grandma, the beach toys you brought me from California 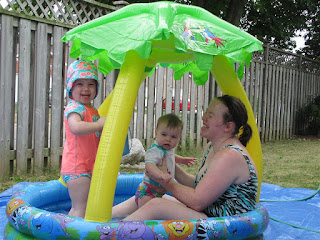 It's getting a little crowded in here
After pool time was over, Mike fired up the grill (I used to call it a BBQ until I found out what real BBQ is) and cooked up some hot dogs and little brisket burger sliders.  It was a fine lunch.  Then we headed back to Woodstock to see Heather and Tom for a bit.

We arrived at 2:30, just after Heather and Tom got in.  They said Boomer's weekend was a great success.  After hanging out for the afternoon, we went to Crabby Joe's in old downtown Woodstock. We followed supper up with a stop at an ice cream shop on the way back to the house.  When we got in, Sandy and Heather watched TV while I read a little more before going to bed.