We awoke to the sound of thunder. The radar showed a smattering of local storms throughout the area, the first rain we have seen since leaving Deadwood. I decided to adjust the trailer tire pressures and add a bit to the tire we had fixed yesterday. Now that the ambient air temperature was cooler, it was reading a couple of pounds low. A nearby gas station had free air so I topped up the trailer tires but, when I tried to add to the motorhome tire, a poor air fitting on the hose only succeeded in bleeding the pressure even lower. I moved next door to a Home Depot and unlimbered my 12 volt compressor to get the job done.

We connected with US 41 and drove through Oshkosh, Appleton and Green Bay to the Michigan border without incident. It was interesting that gas stations in Marinette, Wisconsin on the border have their gas priced closed to Michigan prices instead of twenty cents cheaper like further south in the state. It looks to me that while Michigan prices are high due to taxes, Marinette prices are high due to gouging.

Following Michigan 35 into Escanaba, we found significant road work in progress. Despite the disrupted traffic patterns, we managed to get into the lot of Advance Auto Parts where we found two bottles of White Diamond metal polish on the shelf. We bought both of them. Then it was back on the road again. Passing through Gladstone, I though about our friend Slots. He will know why.

Rather than cut north on Michigan 117 to Newberry, I stayed on US 2 and took the Worth Road/M123 cutover we found on the way out. I did stop at a rest area on 2 along Lake Michigan and was surprised to see the padlock on the trailer hitch was missing. The only thing I can figure is that it never got put on way back in Kingman and I have been at risk of having the latch pop open all that way. I secured the latch with a cable tie and we continued on. In the small town of Moran, I mailed my postage paid envelope to Riders of Kawasaki for the complimentary membership I won in Solvang.

We arrived in the Soo and fueled at the Citgo. The price here was $3.849/gallon, way above what it was further south but still much cheaper than Ontario prices. We set out across the Intenational Bridge and saw the US bound traffic was lined up almost all the way back to the far shore. It looked mostly like Canadians trying to escape for the long weekend. The wait in our direction was only 15 minutes and then we were back in Canada with 8 hours left on our health insurance. One bozo with US plates on a Ducati did weave through the car lines and then ignored the boulevard stop sign at the booth, pulling right in behind the car being inspected. This should have caused him to be sent to secondary but the border agent let him get away with it.

Leaving the Soo, the wind was out of the east. I guess there was no reason to break a losing streak this late in the game. Along the power line near Echo Bay, we saw five osprey nests on top of poles and, just before the St. Joe's Island turn, we saw a new herd of buffalo. There was not much else to note as we wound down the trip on this familiar stretch of highway. We arrived home just about sundown and had the bike unloaded, trailer unhooked and everthing properly parked in no time. 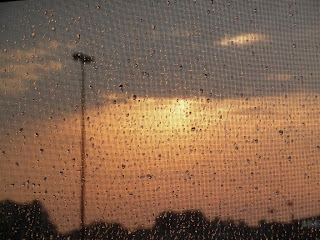 Rain in Beaver Dam - the first we've seen since Deadwood 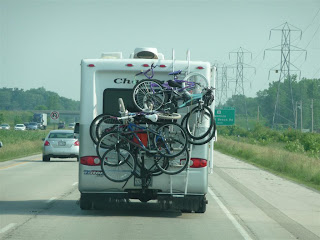 I'd hate to try to tie up this many bicycles 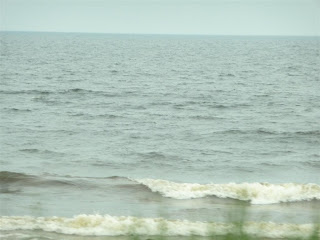 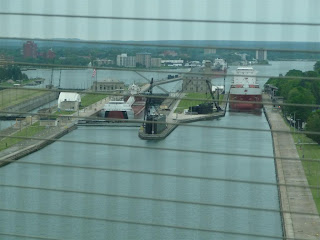 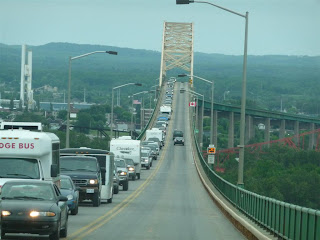 Canadians trying to escape to the U SA on Canada Day 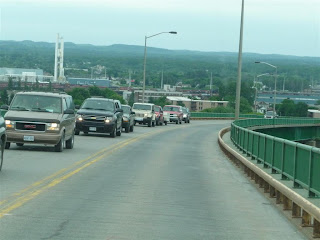 Lined up almost the full length of the International Bridge 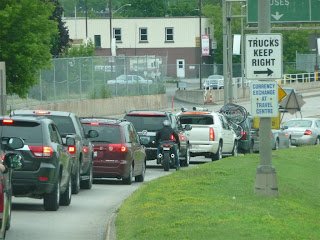 The motorcycle weaved through traffic to the booth 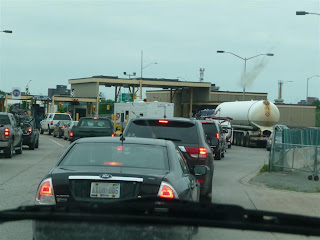 Waiting for the truck lane 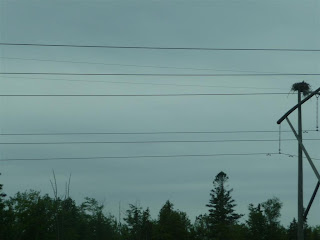 One of five osprey nests visible on the pole line 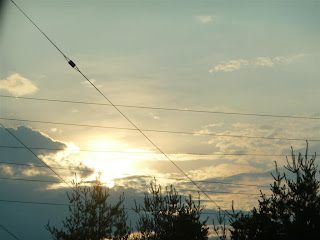 The sun sets on this trip
Today's Route (593 motorhome miles):

The Peace Bridge was tied up, too, on Canada Day! Welcome back home! Where to next?