Sandy and I were up again and on the road back to Cambridge this morning. When we got there, Sandy and Kim loaded up their paint and equipment and set off to the new house to paint Jolene's bedroom light purple, her favourite colour, while Mike and I entertained the kids at the old house. Kim called soon after because the new door key they had cut didn't work in the door so I hopped over with my copy, which worked just fine. 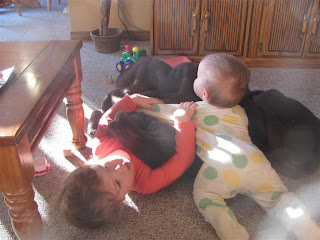 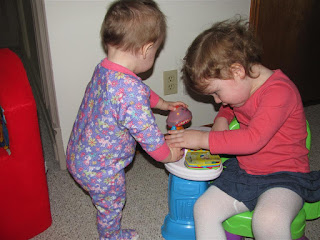 The family that plays together, stays together
Back at the old place, Mike and I held down the fort until lunch time. Then we loaded the kids in his new 1500 RAM truck and stopped by McDonald's for a bag of burgers and fries before heading over to the new house to feed the painters (and us).

The painting was coming along well, although there appeared to be philosophical differences between Mike's and Kim's methods. No problem, though, because Kim and Sandy were doing the job so the ladies did it their way. The downstairs bedroom will be the playroom and Mike had brought some toys over so Jolene and Robyn played down there. Except when Robyn headed for the stairs, which was often. She likes to climb and the child gates weren't in place yet, so we had to keep a close eye on her. That didn't stop her from slipping on a step, hitting her chin and biting her tongue, but it was a minor injury. 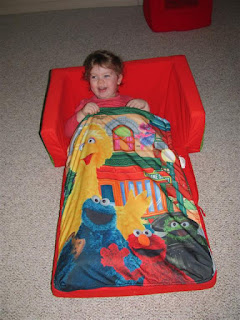 And she wants Robyn to love it too 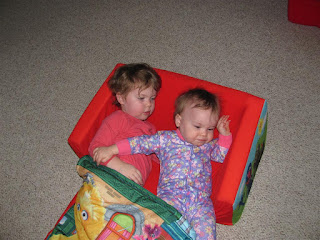 Forget it, I'm out of here
When the painting was done, we headed back to the old house where came made up some tasty homemade pizzas. Then Sandy and I headed back to Woodstock for the night.
Posted by Jim "Skid" Robinson on 10/30/2011