Yesterday, we finished the fall yard work including final lawn mowing and late fall fertilizing along with pulling some of the more obstinate weeds. I like to think of the Fiskars tool I use for the large weeds as a supplementary lawn aerator, two tools in one. Today, we are heading to Cambridge and Woodstock to see the family and, on Monday, take Jolene Trick or Treating.

It was clear and sunny this morning. The early temperature was below freezing but it improved significantly before we left at 11:00 AM. Before we hit the road, I called ETR 407 toll road around Toronto to get three erroneous charges in September, billed against the motorhome which hadn't left Sudbury since before they were incurred, erased. They checked the photos and agreed that the plate they had looked like mine but wasn't. There is now a flag on the plate so that if it comes up, they will visually verify it. They also told me that they were no longer charging the video fee for non-transponder equipped motorcycles. Good to know.

It was a good day to travel. The fall colours are pretty well done for the year, except for the golden needles on the tamarack trees. 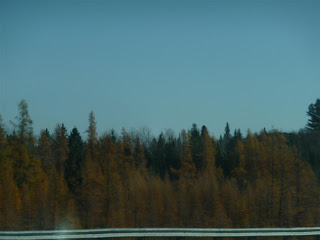 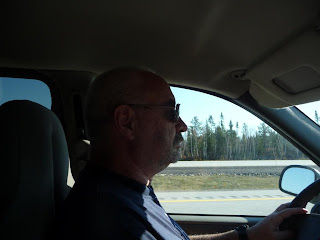 The old master at the wheel
Traffic was light southbound but got busier on the 400 south of Barrie so I got off at Highway 9 and headed west to Mono Mills, our usual route when I want to avoid heavy Toronto traffic. Then it was south on Airport Road for a few miles and then southwest on 24 and south again at Eramosa. When we reached Highway 7, I tried something new and continued south all the way to Wellington 34, which took us to Highway 6 and the 401. From there, it was a short hop to Townline Road in Cambridge.

I noted that both Service Centres on the 401 near Cambridge were closed. The sign said they were being redeveloped to serve us better. That's also what the sign says at the former Service Centre on the northbound 400 Highway at Barrie, but they demolished that one in May 2010 and there has been no sign of rebuilding, renovating or anything else since then. To check it out, I went to the Ontario Ministry of Transportation website and found a page on these renovations. Construction is supposed to commence in Barrie in the fall of 2011 and at the Cambridge facilities during the winter of 2011/12. Okay, it is late October 2011 and there is absolutely no activity in Barrie. Furthermore, while the Cambridge sites are scheduled to be reopened in the fall of 2012, the Barrie date is yet to be announced. OK, so much for my sniveling about MTO and how they look out for the traveler. Back to the trip at hand.

We arrived at Kim and Mike's about 4:30. Kim was already home and, soon after, Mike arrived with the kids. We hadn't seen them since July so the changes were obvious. Jolene is still talking a blue streak but her vocabulary has increased substantially. And Robyn, who just turned one, is walking. And she took to me right away, which was a big change from July. I never realized that grandchildren were going to be so much fun. 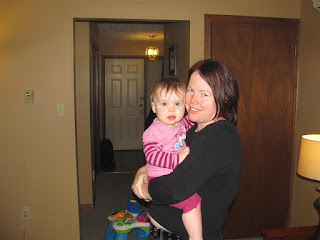 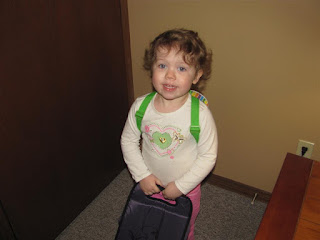 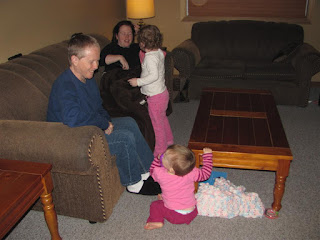 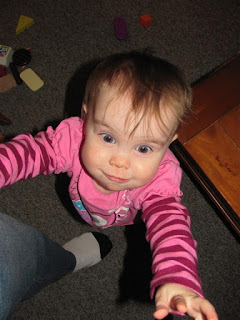 I think Robyn wants me to pick her up
Sandy brought the ingredients to make a casserole for supper and got to work while I played with the young ones. Heather and Tom arrived from work and, eventually, we all sat down to eat. Later, Mike discovered that the second pound of ground beef (the recipe was doubled) was still in the microwave where it had been defrosting. Shades of Clara Peller. But even if it was a little light on the meat side, it was good. 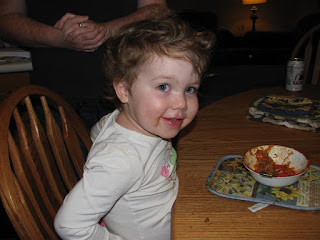 Jolene uses the spoon and bowl for supper 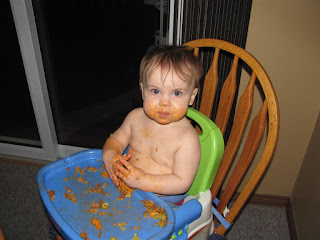 Robyn doesn't:-)
After supper, Kim took Sandy and I plus Heather and Tom over to the new house they had just bought. They decided a while back that they needed more room than the two story three bedroom semi-detached they bought about five years ago, and managed to find a place that fit the bill just about a mile from their current abode. Their offer was successful and they sold the old place for just above their asking price within a week of listing it. The new place is a back split on a lot that slopes to the rear of the lot. The top floor has three bedrooms and a bathroom, the main floor has a living/dining room, kitchen and large garage and, one level down, there is a family room with fireplace, another bedroom, a large renovated bathroom and sliding doors leading out to a huge back deck complete with pergola. Down from this in the front is a level with a laundry room and sizable unfinished basement and, one more level down in the back, the furnace room, a storage area and a workshop. That's right, five levels. There should be no problem with room now. We will be back next weekend to help with the big move.

After returning to the old house, we followed Heather and Tom to Woodstock where we would be spending the nights during this stay, arriving at 10:30. I spent the rest of the evening wrestling with my little ASUS netbook, which has slowed way down due to what appears to be some kind of corruption of the Windows XP operating system. I tried going back to prior restore points with no luck. This happened once before and it took a clean install of the operating system to fix it. I will probably have to do that again when I get a chance. Then it was off to bed.