This morning, Heather and Tom headed off for work. I continued tinkering between my slow computer, trying older restore points and disabling some processes. These efforts picked up the speed a little but it still isn't where it should be. I miss Windows 3.1, where I knew what the computer was doing. Whoever invented the Registry, with its millions of lines of undecipherable instructions, deserves a special place in Hell.

At lunch time, Sandy and I went over to the Heritage Pancake House on Julianna Street, which was fairly empty. We each had soup and split a clubhouse sandwich. This is one of the few places that doesn't take VISA. Then we stopped by WalMart looking for some slippers for Sandy. It seems her other pair somehow got purple paint on them. As usual, she didn't see anything she liked.

We left for Cambridge about 4:00 PM. Everyone was home by 5:00 and, after the kids had supper, it was time for costumes. Robyn was a flower while Jolene was a cupcake. It seemed to take forever to get dark and I kept watching the street to see if the house lights were on or if other Trick Or Treater's were out and about. 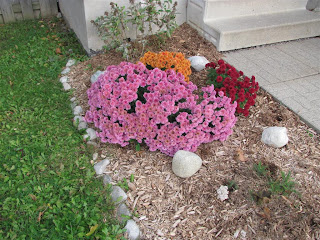 How have these plants avoided the frost? 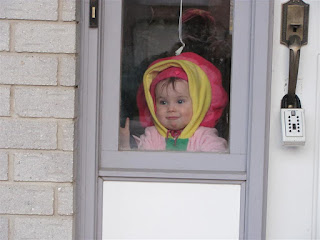 Any kids out there yet? 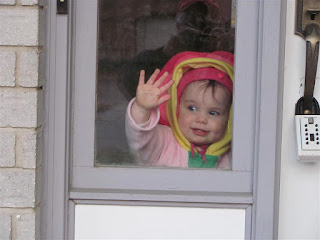 I think I see someone 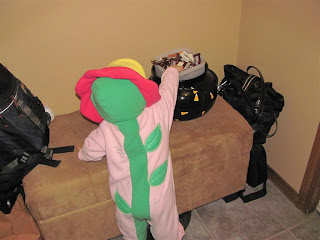 Maybe I'll just take some candy from our bowl 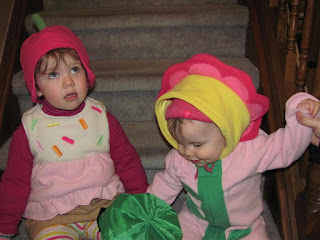 Let's get the show on the road 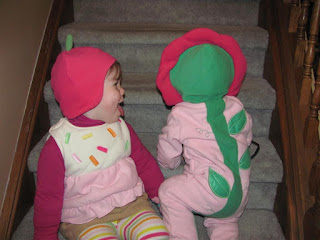 Robyn sees more stairs and away she goes 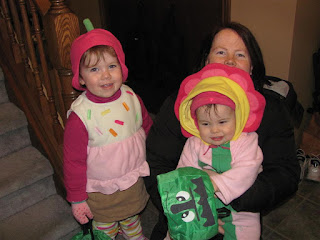 Finally, time to go
Mike had gone over to the new house to hand out candy. Sandy stayed at the old house while Kim and I went out with the kids. Kim carried Robyn while I walked with Jolene. Last year, Mike and I had rehearsed Jojo on how to say "Trick or treat" and she was good at it until we got to the first door. Then it was deer in the headlights as she stood there in awe. This year, she was right on the money with "Trick or treat" and "Thank you". We only did about a dozen houses or so before we worked our way back home. 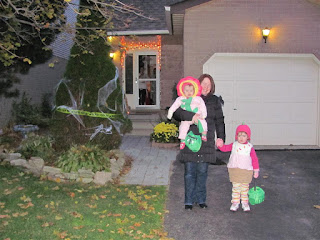 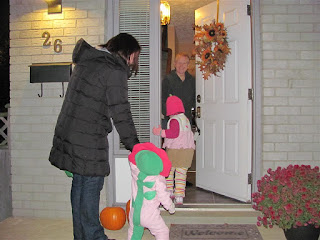 Grandma Sandy, we're home
Back home, Jolene helped hand out candy to the other kids as they came to the door. She seemed to be a big hit with the older ones. She only had a couple of candies but one of the new things in the candy bag were little containers of Play-Doh, and she amused herself with them. 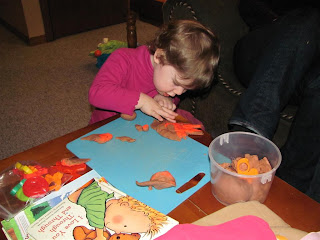 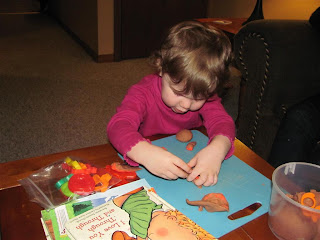 I'm not sure what it is but it looks good 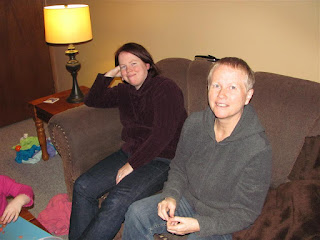 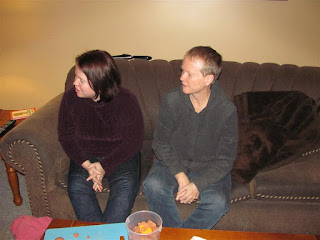 But what is Jolene up to over there?
As the streets cleared, Mike returned from the new house. It seems the youth density in both neighborhoods is about the same since each house had about fifty callers. I reflected back on my old friend Tarkus' annual rant on how Trick Or Treating was teaching our children to be share-the-wealth liberals. I miss arguing politics with him but he has moved on to other interests.

We left for Woodstock about 8:30, encountering a little rain on the way. We reflected on the ideal Halloween weather while the kids were out. Not too cold with no wind or wet at all. Back at Tom and Heather's, we saw what Tom had done with the pumpkin they had. This Jack O' Lantern is absolutely amazing. Without the candle inside, it looked like a series of random cuts but when it was lit, the face appeared. A work of art. 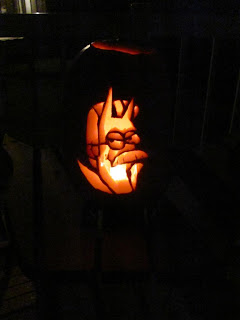 I'm not a Simpsons fan but it might be Ned Flanders.
It was a quiet evening and we were all in bed early.
Posted by Jim "Skid" Robinson on 10/31/2011