Heather and Tom left for work at 7:30 AM this morning and we hit the road at the same time. It was an unseasonably warm morning with no frost. We stopped at McDonald's in Woodstock for breakfast to go and then fueled up at Canadian Tire before taking Highway 401 East through banks of fog. I resolved to see what lower speed would do for our fuel economy and motored along in the right lane at the 100 KPH speed limit. Perhaps piloting the motorhome has given me more patience. Maybe I'm just getting old. 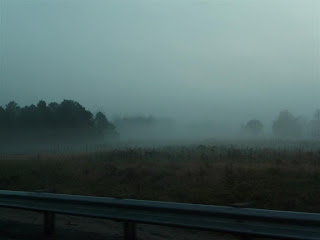 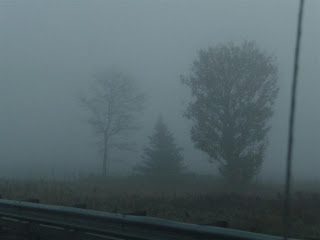 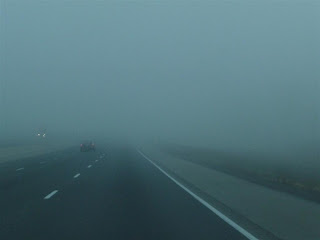 I'm glad it's a divided highway 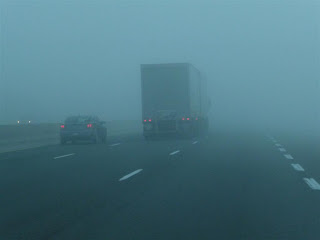 Lights on, everyone
Because it was morning rush hour on a Tuesday in Toronto, we opted to take the back roads north of the city and retraced the new route we took coming down. This is the best way I have found for avoiding the larger centres but I doubt if we'll use it much because the southern legs actually travel southeast, resulting in a backtrack. Highway 24 out of Cambridge through Guelph is the most direct route.

In Caledon, Sandy needed to use the facilities so we stopped at the Eddie Shack Donut Shop. Eddie's chain never took off quite the way Tim Horton's did. Maybe one reason is because their washrooms are locked and for customers only. 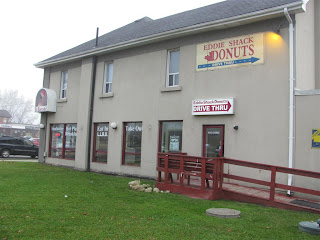 Eddie Shack Donuts - Caledon Ontario
Still needing a rest room, we went on a few miles to Mono Mills on Highway 9 and stopped at the more friendly Tim Horton's. The Shell station there had fuel advertised at $1.179/liter. I can't remember the last time I saw gas under $1.20. And, to add icing to the cake,the sun came out. 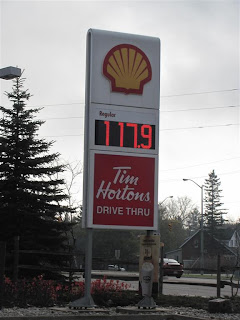 Fuel price in Mono Mills Ontario
Heading north towards Barrie on the 400, we caught up to two Wide Load portable buildings out of Indiana. They were taking up more than a whole lane and we watched one of them clear the overpass at Highway 88 by inches. At speed. I would hate to be pulling that load. 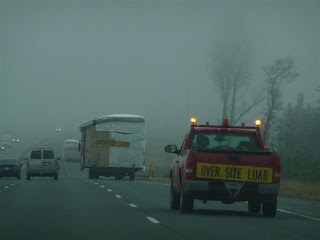 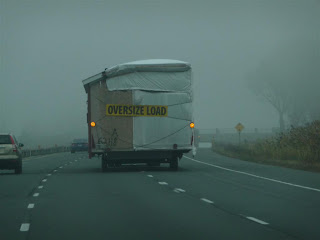 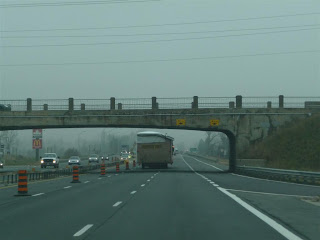 Less than inches to spare
In Barrie, we ran into more fog. Then, north of there, Highway 400 northbound went down to one lane due to resurfacing operations. I'm glad to see the new asphalt (which we Canucks strangely pronounce aSHphalt) but wonder if November is the best time to do this. No tourists or cottage country traffic, I guess. The sad thing is that the areas of new asphalt are rippled. Not uncommon these days, I have found.

We stopped at the McDonald's in Parry Sound to grab lunch. North of there on the two-lane Highway 69, we found a crew grinding the centre line and adding centre rumble strips. I think these are a great idea and, after seeing them for years in the US, am glad to see Ontario is adding them. They should alert distracted or sleepy drivers before they cross over into oncoming traffic. 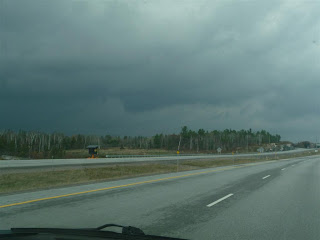 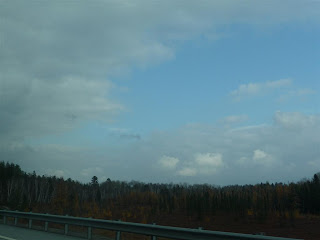 Blue sky the other direction
The storm clouds bearing down on Sudbury slid north of the city by the time we got there. I fueled up and got the verdict on the lower speed. Typically, our 2003 Dodge Caravan with its 3.3L V6 has given us 22 to 23 MP(US)G on the highway at 18 KPH above the posted limits. Today, we got 26.3. That is a significant difference at today's gas prices.

This week, I have an Action Sudbury meeting, we both have appointments with the sawbones and I will work a charity Bingo before we head back south on Friday to help Kim and Mike move to the new house.