We set the clocks back last night. Earlier sunrise, earlier sunset. It was a bright sunny morning in Woodstock, very unseasonable. We again stopped at McDonald's for food and Canadian Tire for gas and then headed straight into Toronto on the 401 at a blistering 100 KPH. The drive was uneventful as we caught the 400 north for home.

After a stop at Waubaushene for a 5 Hour Energy drink, we continued on. There was a traffic enforcement blitz near Moon River but it was no concern of ours at the speed we were traveling. North of Parry Sound we encountered a few motorcycles on the road, unbelievable for this time of year. We made one more stop at the French River Trading Post and then pushed on for the last forty miles. 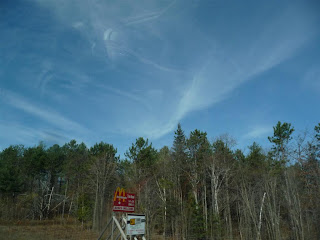 Strange clouds near Parry Sound
Soon after we left the Trading Post, I started feeling weak and shaky and started sweating. A quick glucose check showed my blood sugar was only 3.7 (67 for my American friends), exceptionally low for me. Since I don't use insulin, hypoglycemia is't usually a problem for me so we didn't have any sugar in the vehicle nor anywhere to get some before Sudbury. I pulled over and let Sandy drive.

Once in town, we stopped for fuel and a Mars bar. The mileage was only 25.6 MP(US)G this time, probably because we didn't take back roads in the south and kept to 100 KPH in the 90 stretches, but it was still way better than usual. The chocolate bar kicked in but I immediately developed a migraine aura. As with the few times they have hit me in recent years, it was a silent migraine. No pain, just a feeling of pressure in my head.

On the way home, we saw motorcycles everywhere. Again, very strange for this time of year. We picked up some groceries and got in with plenty of time to catch the NASCAR race from Texas.