We had originally been told to be at Kim and Mike's for 8:00 AM but got a call suggesting an hour later wouldn't be a problem. When we left, we took two vehicles, Heather traveling with me and Sandy going with Tom. We made a quick stop at Starbucks to get Kim a pumpkin spice latte.

When we got to the house, it was apparent that the rest of the crew arrived at or before the original time. Mike, his buddy Jay, his brother and brother-in-law, who looked like the front line of a football team, had the truck in place and were well on their way to filling it with furniture and appliances. Being smaller and older, I just stayed out of their way, disconnecting cables on the entertainment centre and helping Mike's mom Gale and the ladies load smaller stuff into the two minivans. We made a couple of trips to the new house and the rental truck made two as well. It went pretty well and everything was in the new place by 3:00 PM. 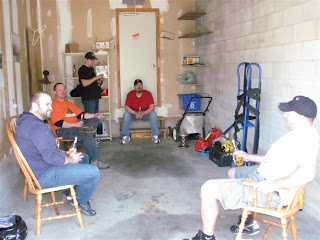 The A Team taking a well deserved break 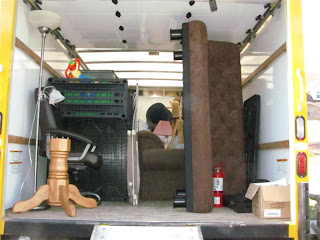 The second load is well under way
As we were wrapping up, Mike ordered some Mr. Topper's pizza for the crew and everyone took a sustenance break. Then the heavy hitters left and I followed Mike as took the truck back to the Penske shop, After looking all around the closed building, we found the key drop off box.and then I brought him back to the house, 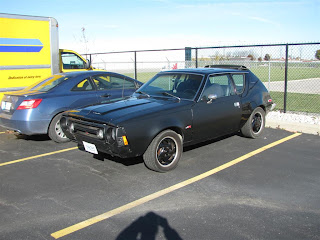 Mean looking Gremlin in the Penske yard
We did our best to move the boxes and things from the garage to the appropriate levels but it will be some time before it is all squared away. About  three, they went to pick up the girls from the baby sitter's. 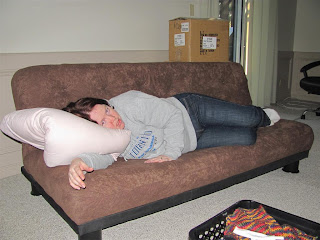 Kim taking a break in the family room 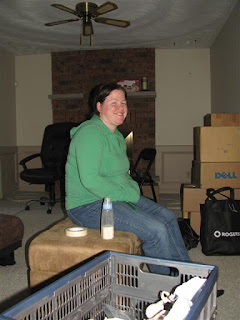 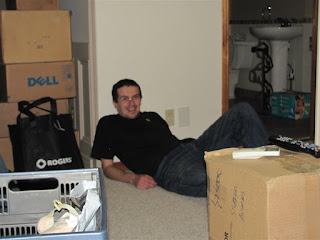 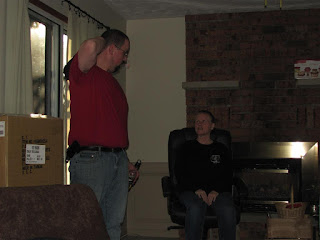 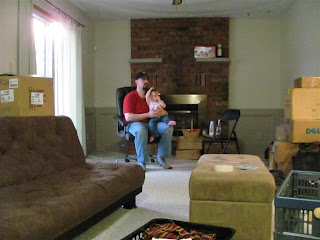 Mike and Robyn
One last thing on Mike's list was a new TV. His old 27" CRT set was toast and he was wrestling with what to get, considering the myriad units on the market. Tom had a nice Samsung 46" LCD he had gotten last year and I have a several year old 42" Panasonic Viera plasma, so we took him shopping. Our first stop was Sears, where they had the same set as Tom's, but for over $100 less than a year ago. After comparing sets and talking to the sales guys, that is the one he settled on. Because Sears didn't have a suitable TV stand (it needs doors because of the kids), we went on to Best Buy where Mike chose what he wanted but would have to go to the Kitchener store tomorrow to pick it up. Best Buy had the same TV but it was priced higher than Sears. 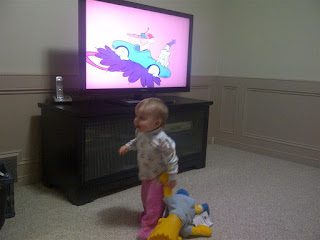 Mike sent this picture of the new TV
On the way home, we picked up Arby's for everyone. Back at the house, we ate Beef 'n Cheddar sandwiches and curly fries. Hunger satiated, the four of us drove back to Woodstock. It was an early night to bed.
Posted by Jim "Skid" Robinson on 11/05/2011