It was partly cloudy and above 50F today so I took the Wing to the gas station and, after putting in a half can of SeaFoam, filled it up with fuel. Then I took it for a ten mile ride to get the SeaFoam through the injectors. It is a little nippy wearing a mash jacket at 50, but not too bad considering there should be snow on the ground.

Back home, I moved things around in the garage, aired up the snowblower tires (chains slip off at 0 PSI), checked the oil and fired it up. It started right away, pretty good since it is almost twenty years old. I also got out my array of shovels plus the broom and ice chopper and put the reflective posts at the end of the driveway.

I emptied all the items from the Wing bags, trunk and fairing, putting them in a storage box where I can find them in one place next spring. Then I rolled it to the back of the garage and lifted it onto the centre stand. I had changed the oil last week so it was just a matter of putting mothballs in the exhaust and fabric softener sheets at various places around the frame to repel rodents. Then I plugged in the battery tender and kissed it good night. 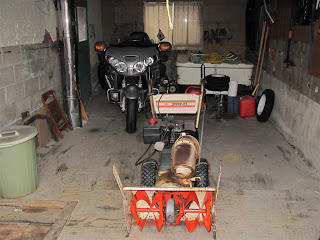 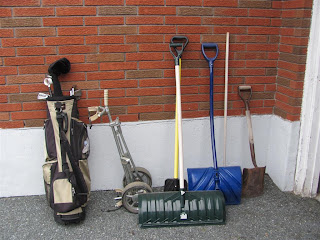 Crossover - golf clubs versus shovels
I also took a few moments to set out rat traps for the chipmunks since they started extending their burrows last night. And I climbed up on the roof to check out a squeeky whirlybird turbine. Didn't fall off the ladder but I did cut my thumb on a sharp edge. Go figure. 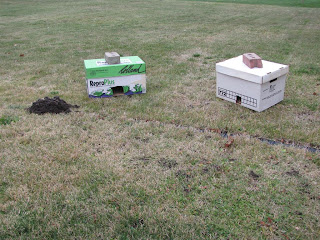 Chipmunk mound and rat traps in boxes
So it looks like I'm ready for the white stuff.

Apropos of nothing, son-in-law Tom sent me this photo of a GL1800 whose owner didn't know when to stop. I would hate to be around this on a sunny day. 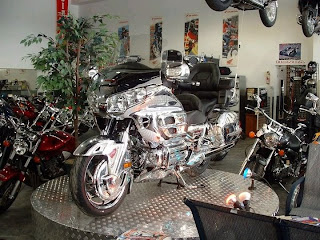