It was the Thursday morning before Good Friday.  Last year at this time, following an exceptionally mild winter, all the snow was gone. Bikers and golfers had been out for several weeks and spring was well under way. This year was a whole other thing. Our winter had been more like the winters of old, with heavier snow and colder temperatures, and spring was dragging its heels. A few hard core riders had been out but the golfers were still hibernating. 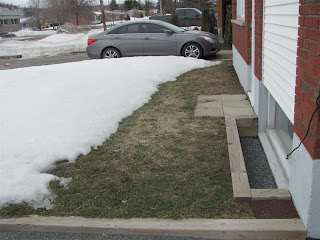 Our front yard this morning

Our trip south this weekend was to visit kids and grandkids we hadn't seen since Christmas. I had one chore before leaving, to deliver a monthly report on our Action Sudbury charity bingo's to the city licence office. I had, as Vice Chair, been covering for our illustrious leader since December since he and his wife (our secretary) decided that winters in Mexico were much more palatable. I will be glad to see both of them get back in a week or so. They won't, however, like the snow.

After looking for a gas station that wasn't too crowded and dropping off the report, we headed south under grey skies just before noon. The road was dusty to salty as we motored along. The visible salt will soon wash into the ditches with spring rains, attracting moose to the roadsides and requiring enhanced vigilance.

Construction of the new four lane highway was well under way from the Killarney turnoff to the French River. It looks like the Holiday Golf Course at the Alban turnoff has lost a few fairways and greens because the roadbed for the new lanes now sits were they had been. I'm not sure if this means the end of golfing here or not. Although it was evident a lot of work here had been accomplished, the only worker we saw today was covering up the reduced speed limit signs in preparation for the long weekend.

Passing through Barrie, it was good to see construction proceeding on the service centre on the northbound side. About time since it was closed for rebuilding in May of 2010. The southbound service centre at Highway 89 was now just a hole in the ground, but it looked like this one might get done in a more timely manner.

We got off Highway 400 at Highway 9 to avoid Toronto rush hour traffic and proceeded west to Mono Mills, where we saw that gas prices were $1.249 per liter compared to $1.296 back home. This spot normally has the lowest prices along our route and today was no different.

West of Caledon, we did see one bike coming out of the side road that leads from the Forks of the Credit, a popular motorcycle road. Good for him. Then in Guelph, we took a different route to avoid the rush hour jam that usually happens on Highway 24 as traffic tries to make a left turn on County Road 38. Instead, we went south on Highway 6, cut off on Downey Road to CR 34 and then proceeded to Townline Road in Cambridge. We encountered little traffic this way and arrived at Kim and Mike's just after 5:00 PM.

The grandkids were happy to see us and we were even happier to see them. Robyn is 2 1/2 and absolutely fearless. Usually she is smiling at everyone. Jolene, at almost 4 1/2 years old, has been in junior kindergarten since September and is a ball of fire. We visited with them and shared pizza for supper before heading on to Heather and Tom's place in Woodstock for the night. The plan was to come back tomorrow for more grandchild time.

We left Cambridge at 7:45 and arrived in Woodstock 8:30. I was surprised to see the former Esso station at Cedar Creek Road and Highway 401 in Ayr was now a Flying J. We don't have a lot of these in Ontario but this made me wonder if we are going to see more.

Heather and Tom had cancelled their cable TV service and were now relying on Netflix, run through their PS3, as well asdownloaded TV programs. This was something I wasn't familiar with but, while watching a number of episodes of Top Shots, I realized I have all the hardware necessary to do the same thing. I won't be cancelling my cable service anytime soon but it would offer significant additional viewing options at a very minimal cost. Then again, perhaps I don't need more viewing options, given the amount of time I dedicate to watching the (I guess I can't say tube any more) flat screen these days.

Sandy turned in before me but I was in bed by 11:00 PM, unusually early compared to when I usually retire.