One of the ways we pass the winter months is by travelling to Toronto for the various motorcycle shows. Normally, Leo, Doug and I will make a day run down and back to see the December show downtown at the Convention Centre while Sandy and I attend the January show at the International Centre with Heather and Tom. This winter we did neither, so Doug and I decided to visit the show we normally skip, the Spring Motorcycle Show, again at the International Centre. Leo was still in Arizona and Sandy decided she didn't want to spend nine hours in the car, so it was just Doug and I.

Freedom Riders Barry and Bev live in southern Ontario and had volunteered to set up and man a club booth (provided free of charge by the show) to promote the Freedom Rally this summer. Several other club people were also planning on going down and back for the day.

Doug borrowed his wife's little Kia for the trip to save us some fuel. He pulled into our driveway right on time at 6:00 AM and we got underway. The only stop on the way out was Timmy's for my black coffee and breakfast sandwich to go. We had slipped back into a March cold snap after the the previous week's above freezing temperatures but, despite it being -15 C (+5 F), it looked like it was going to be a good day to drive.

The  240 mile run down to Toronto was uneventful. We made a stop at Tim's half way down for a pit stop and arrived at the International Centre on Airport Road in Mississauga at 10:25. The last forty miles had been through light snow squalls and sloppy roads. The parking lot was far from full and we parked the little Kia easily. However, there was a large lineup to buy tickets, but it only held us up about ten minutes and we used the $3.00 off coupons Doug had printed from the Internet.

Unlike the January show, which takes up five buildings, this one was confined to only two. There were accessory vendors selling mostly clothes and displays of custom and vintage motorcycles, dealers selling bikes and tourism places promoting their areas. But one of the largest categories was clubs promoting charity rides plus a couple of larger events. The charity aspect has proliferated in recent years and competition among them is intense.

Doug and I explored Building One looking for the Freedom Riders booth. Not finding it, we stopped at the food court for a lunch of Nathan's Famous hot dogs and fries. Then we moved on to the other building, working our way through the aisles until we found Barry and Bev. They were not twenty feet from where we had originally entered the show. The booth was simple but very nice, with the club banner and Barry's 2002 GL1800 for a backdrop. A couple of minutes after we found them, club President Rob, Dan R. new member Paul and a friend of theirs found us. 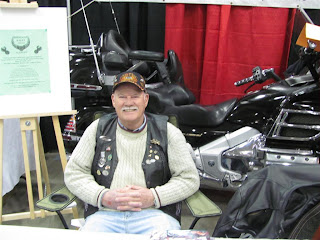 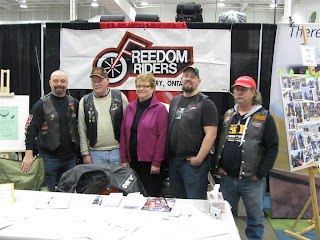 Rob, Barry, Bev, Paul and Dan in the booth

Doug and I took over the booth for an hour or so to give Barry and Bev a chance to see some of the show. Having worked snowmobile shows for years, I know that exhibitors often miss most of  what is going on around them. The idea here was to promote the 20th Annual Freedom Rally, which is taking place August 2nd through 5th in Sudbury. Once upon a time, there were club rallies throughout Ontario each summer. These were low key events where you set up your tents, rode in the daytime and mingled around the bonfire in the evenings. Over the years, the clubs burnt out and these type of weekends started disappearing in favour of the mega-events like New Liskeard. Recently, Muskoka, Manitoulin and South Georgian Bay have been trying to get on the large rally calendar and generate some tourism dollars for their area. But the casual laid back atmosphere of a club weekend is missing at these venues and so we are promoting the Freedom Rally as a chance to experience the fun of the old days. 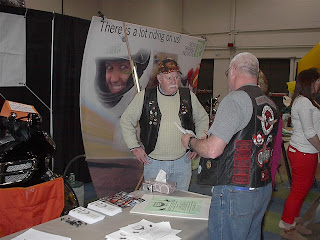 Me talking to Barry about something or other 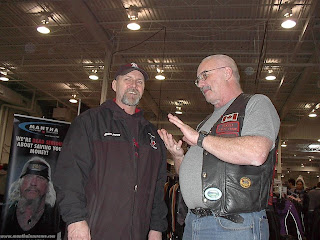 When Barry and Bev came back, Doug and I made one more circuit. I stopped and talked to Glenn from Motorcycle Mojo magazine about a problem with my digital subscription and why the magazine should cover the last club rally in the province. Doug got him a rally flyer and then we headed for the door. I had also, throughout our visit, managed to make a few Vulcan riders aware of VROC so we may see a few new Frozen North members in the future. 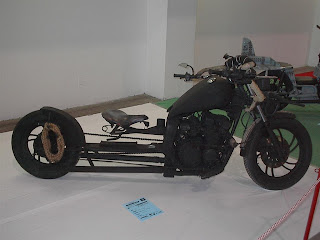 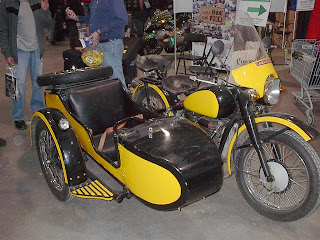 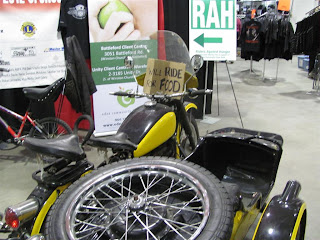 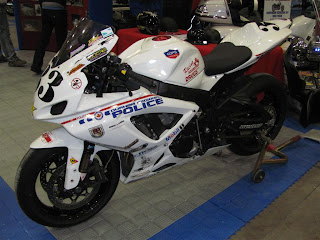 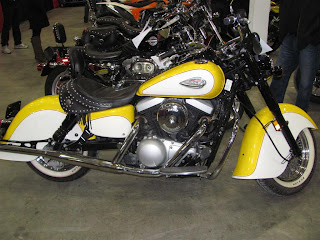 Leaving the hall about 2:30, the squalls had stopped and the parking lot was now full. Doug had driven down so it was my turn to take the wheel. We stopped on the way out and I filled the tank for my share of the fuel. Then we headed north on clear roads. We stopped at Lick's south of Parry Sound where Doug had a signature Lick's Homeburger and I had back bacon on a bun. As we were eating, Biker walked in. He and Normie had done the day trip to the show too. Both are Freedom Riders and VROCers. They left Sudbury after we did, didn't find the booth at the show and headed back before we did, but stopped in Barrie for wings.

The last stretch went by quickly and I was home by 7:00 PM. It was pretty sparse as shows go, but it was a good day for a road trip and we saw a few things and met a few people. All in all, it was a good day.
Posted by Jim "Skid" Robinson on 3/16/2013

Sounds like a good day. Hard to remember that it's still Winter up there.

I find it hard to believe it's still winter up here :(

I find it hard to believe it's still winter up here :(