I woke up after 7:00 AM and we settled in to watch last night's episode of Grey's Anatomy, downloaded from some sources and played through the PS3, while Tom brought back breakfast from Tim Horton's. We headed back to Cambridge at 9:15, arriving at Kim's at 9:40. There was a dead possum in the middle of Myers Road. At least I think he was dead and not just playing possum. These critters used to be considered a southern thing but started moving into this area more than a decade ago. Sooner or later, we will need a stew recipe.

Mike was at work doing went to work early to do some work in anticipation of his company's inventory. We spent time playing with the kids and watching some TV until he got back. 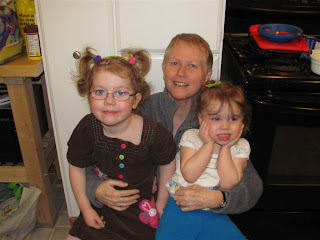 When Mike got back, we all decided to go for a walk. It was cool and windy but that didn't stop us. Everyone bundled up and we set out on a trek that took us a couple of blocks and then down a path to a creek. Mike thought this would be a good turnaround point but Kim said we should continue along the path to a local playground. Mike pointed out that this would be a fair distance and he would end up carrying someone back but the majority sided with Kim and we kept going. 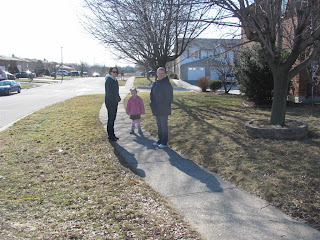 Kim, Jolene and Sandy wait for the slowpokes 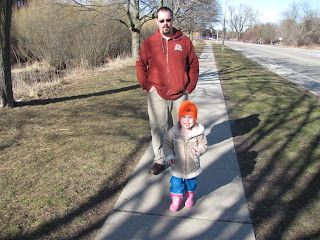 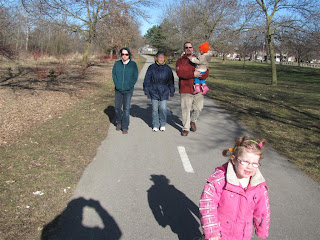 Someone is being carried already 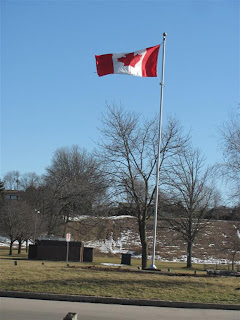 We are walking into a stiff headwind

We finally reached the playground, a nice little facility. The whole area has a rubber mat ground cover to minimize bruises. I wish we had this when I was a kid. The slides were popular, as were the swings. Jolene insisted on the big kids swing and, despite her father's warnings, did not fall off. 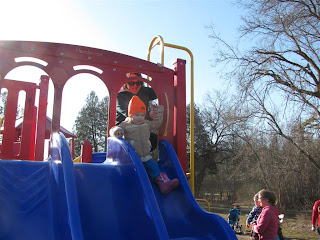 Mom helps Robyn get lined up on a slide 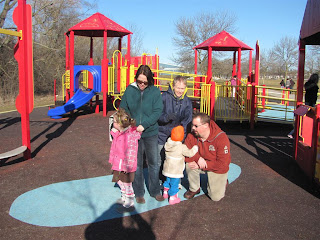 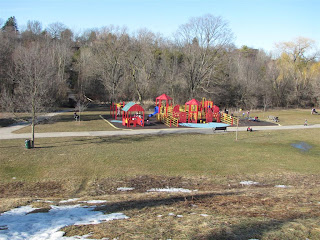 This is a good spot for children

After a wile, we started back and discovered another path back up to the street level. As Mike had said earlier, it was a good walk back to the house but we made it OK with only a little carrying. 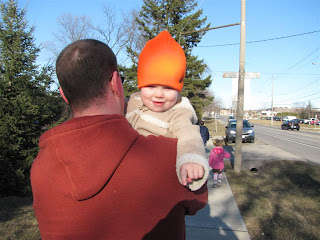 Robyn gets a little lift along the way

Back at the house, Mike ordered some BBQ for delivery. It was good, although not quite up to the standard we have gotten used to in the south. Still, it was tasty and the grandkids really tucked into it. 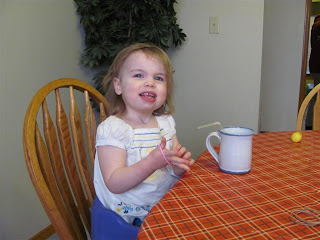 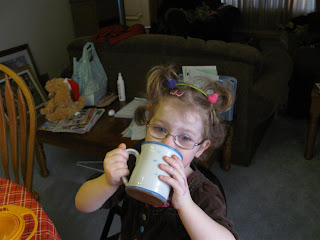 Later, after Jolene and Robyn had gone to bed, we settled in and watched some television before turning in fairly early. Keeping up with children takes a lot out of us poor old adults.