We slept in a bit this morning and didn't get away from the motel until almost half past eight. Rather than a sit down breakfast, we got coffee and a few nibble things at the Blarney Castle store at the corner gas station. 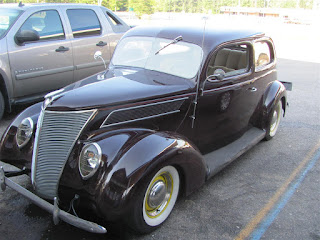 Seen at the gas station 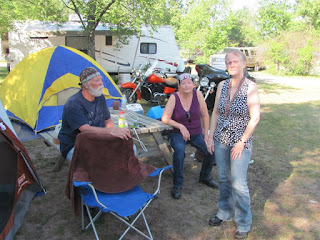 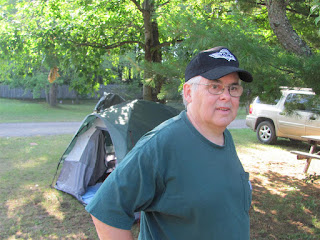 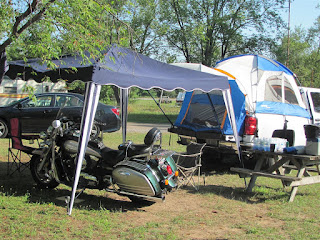 Today, we would explore the Old Mission Peninsula, visit the lighthouse at the point and check out a restauarant Big Jim had heard about. I tried to get someone else to lead but that wasn't going to happen.

After a stop at the gas station in Interlochen, we rode north on Long Lake Road and ended up following Silver Lake Road to US 31 in Traverse City. Traffic was heavy but we were lucky with lights. There was a little bobble making the left onto M37, the road that goes out the peninsula, but we all got through after a few moments. From there, it was a straight shot all the way out to the Mission Point Lighthouse. Unlike the Grand Traverse Lighthouse Park at the tip of the Leelanau, this park is free. 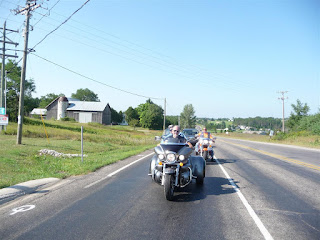 Together on Silver Lake Road 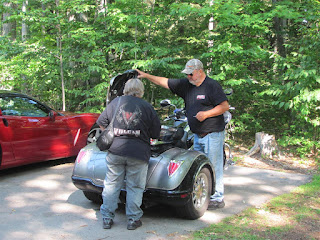 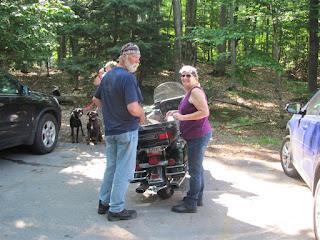 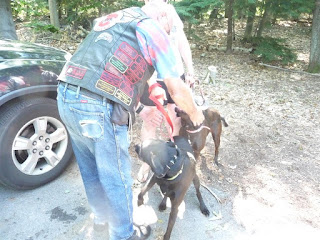 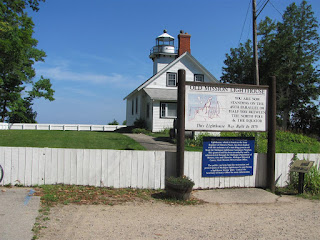 Sitting on the 45th parallel 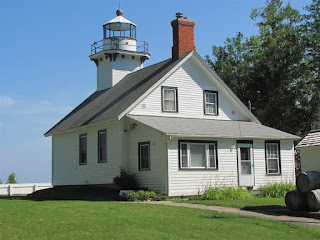 A pretty and well maintained building 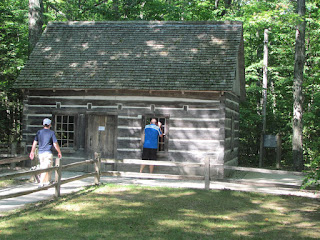 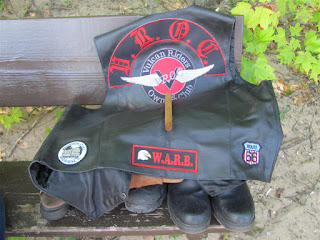 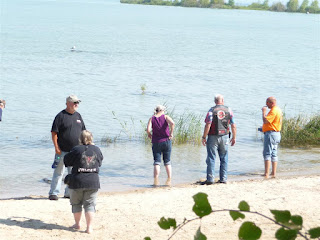 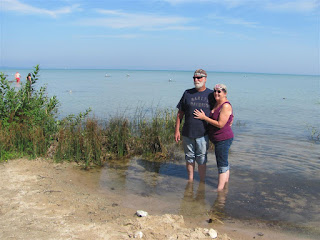 Tim and Dee getting feet wet 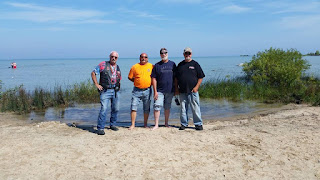 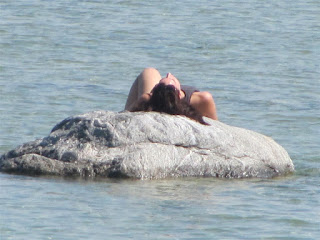 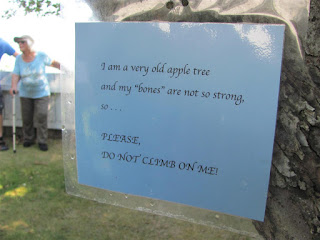 The restaurant Big Jim wanted to try was the Jolly Pumpkin on the west side of the peninsula. I found it in the GPS and set a destination. After skipping one right turn due to a gravel road, we turned off M37 and moved over to Peninsula Drive, following it to the restaurant. 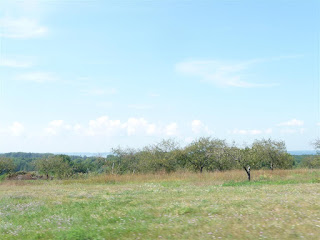 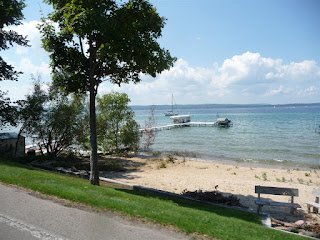 The Jolly Pumpkin was hidden in some trees with a very understated sign out front, but we found it. Inside, they were able to seat us right away. They advertise handcrafted artisan ales and we could see racks of samples being delivered to other tables. The food menu featured artisan type selections as well. I had something called a Cheesy BLT:

It was very good, well worth the $11.00 I paid for it, and I will stop here again when I'm in the area.Sandy had a smoked turkey sandwich on multi-grain bread. She liked it too, but wasn't a fan of the sauteed kale they put on it. Who would sautee kale anyway??????

Special thanks to Big Jim for finding this place. 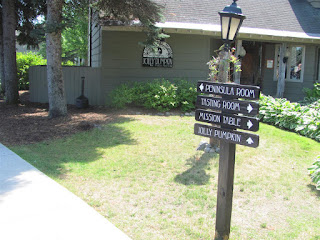 Leaving the Pumpkin behind us, I led the group back along the Traverse City waterfront. It was about 2:00 PM and I had to admire the park and beach areas teeming with people. This is a very nice place to visit and, probably, to live. 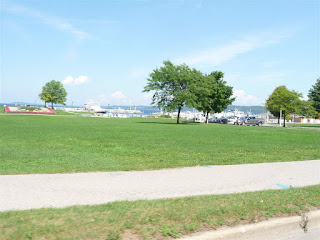 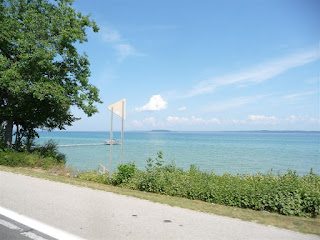 We stayed on M72 and then took M22 along the west shore of the West Arm of Grand Traverse Bay to Suttons Bay where we stopped for gas. As the bikes were fueling, Ray and Lisa rode by heading south. They honked and waved but Flatop, Too Tall and Linda, who were following, pulled in. 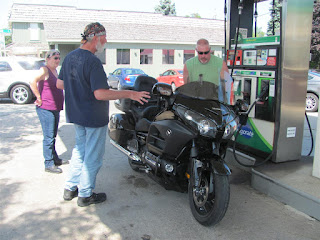 With our expanded group behind me, I went to the north side of town and then turned west on M204 to the top of Lake Leelanau. From there, we headed south on South Lake Shore Drive to the village of Cedar. Flatop was right behind me and I know he wanted to open it up, but I held to the pace I had been doing out of respect for the group. From Cedar, we continued south across M72 and followed the west shore of Long Lake to Interlochen where I peeled off to top the bike up with cheap US gas.

It was good to note that I didn't have any serious disorientation or anxiety episodes yesterday or today.

Back at the campground about 4:00 PM, we kicked back and took it easy.  Soft ice cream is a Cycle-Moore tradition and some went to partake. Tim and I continued our discussion, touching on books, movies, music and politics. About 6:45, the cornhole boards came out. 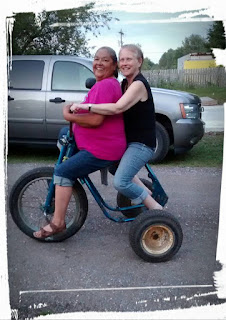 Lisa and Sandy on an ice cream rum

We were pleasantly surprised when Kevin and Steph pulled in from Middlebury, Indiana. They hadn't been on the list of attendees but found they could get away at the last minute, so they jumped in the truck and came up. It sure was good to see them. 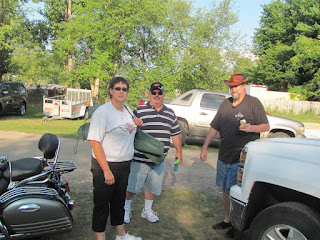 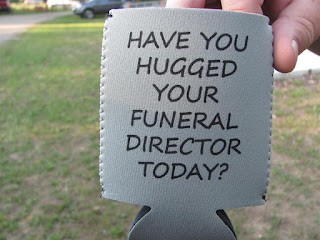 Must be a Middlebury thing
Eventually, it got to be time to hook the trailer up and load the bike. Everyone wanted to know what they could do to help but I pretty much have it down to a one man operation by now. If I don't hit anything or fall off, I count the procedure as a success. 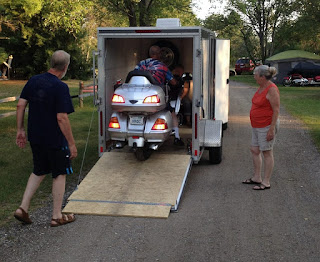 Tim and Dee watch as I load the bike

The rest of the evening was mostly talking and laughing as the cornhole challenge raged on. Rosie and I swapped stories about work and play while we don't know what the ladies were plotting. 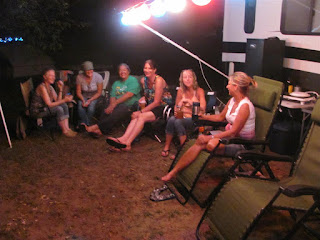 The ladies of VROC 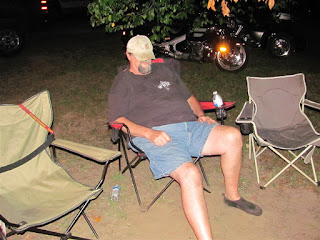 Again, we didn't stay too late. We made the rounds saying our goodbyes because we'd be heading out directly in the morning. We were back at the motel by 11:00 PM. Facebook evidence shows that the party went on quite a bit longer. 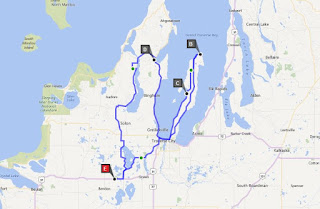