Still no cigarettes since June 4th. We're off this weekend to the VROC Interlochen gathering in Michigan.

I spent yesterday trying to catch up on some essential things that I had been neglecting and, with my brain in overdrive, couldn't get to sleep until after 2:00 AM this morning. That was unfortunate because we had volunteered to get up at 4:30 to drive Sandy's cousin Lorna and her partner Kelly to the airport to catch a flight to San Francisco. This was the first leg on their return trip to New Zealand after having been in Canada for a few weeks. We were up on time and Sandy's mom Jan joined us for the drive to the airport. 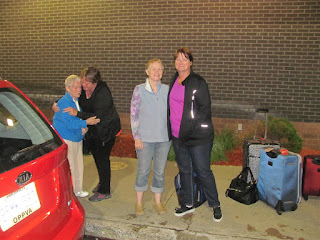 Jan, Lorna, Sandy and Kelly at the Sudbury Airport

Back home, I got a couple of more hours of shut-eye before struggling to get vertical about 8:00 AM.

With all the other jobs I was working on yesterday, the bike was still in the garage, the trailer was still unhooked and I was still not packed. Shifting into high gear, this was all accomplished by 9:15. The last task before leaving was to shut down my laptop. This was the moment Windows 7 decided it needed to install 15 updates. XP used to give me a choice as to whether to install now, but 7 just seems to go right ahead. The computer spent 25 minutes that I will never get back before finally shutting down.

We were finally out the driveway at 9:45. The GPS projected an ETA of 4:30 but I estimated that would be at least 5:30 with stops. After a stop at Tim's for breakfast to go, we were finally on the road by 10:00 AM under mostly cloudy skies. The temperature was 18C. We weren't far out of town when Sandy noticed that we didn't have the US cell phone. I took it out of the truck for safekeeping and forgot to put it back. Not a good start to the weekend.

We passed a lot of eastbound motorcycles on Highway 17, mostly Harley. I suspected they were mostly on their way back from Sturgis. I spoke to a few New Brunswick riders at the Tim's in McKerrow and they confirmed this.

We arrived in the Soo and stopped at the West End Tim's. Then we found the streets in this part of town were torn up and we had to loop all the way round to Queen Street to get to the bridge to the USA. Canada bound traffic was backed up more than usual on the bridge but, oddly, the US side was almost clear. Customs took less than a minute and then we were on our way. 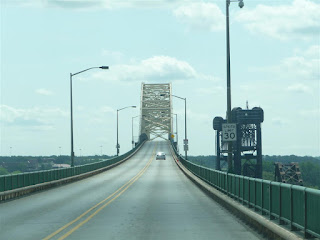 The International Bridge with no traffic 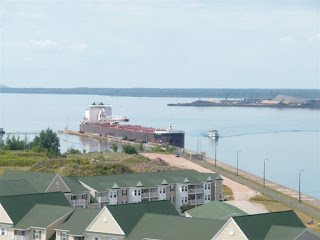 A lake boat ready to enter the locks 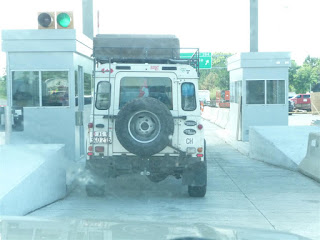 Foreign traveler in the toll both

We headed south On I-75 into a stiff headwind while I contemplated what route we would take after we crossed over to the lower peninsula. There was quite a stretch where the highway was down to one lane each way although, other than countless orange barrels, there was no sign of any work being done. 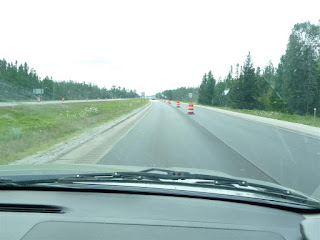 Orange barrels on I-75

After making a quick stop at McDonald's on US 2 in St, Ignace, we crossed the Big Mac. I opted to take US 31 through Pellston to Petoskey and then follow that road through Charlevoix to Traverse City. In fact, Interlochen and the Cycle-Moore Campground are both on 31. I-75 is quicker and easier despite being longer, but the deciding factor was that the slab is just so boring.

In Petoskey, we stopped at a BP where I paid $2.99 per gallon to fill the truck up. Inside the station, I heard a crying baby which made me think of a Youtube video Sandy showed me a while back which our daughter Heather had posted on her timeline. Babies grow up but these things can live for 75 years. Yikes.

As we approached Traverse City, we could see what looked like big storm clouds across the bay. They were probably all the way over the Leelanau Peninsula, that long finger of land that separates Grand Traverse Bay from Lake Michigan. I had to look up the source of the word "Leelanau". It appears that it was originally believed to be an Ojibway word meaning "delight of life", attributed to Indian Agent and anthropologist Henry Schoolcraft. More recent thinking is that it was a pen name of his wife Jane Johnston Schoolcraft, a truly remarkable native American woman. 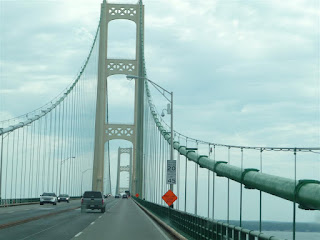 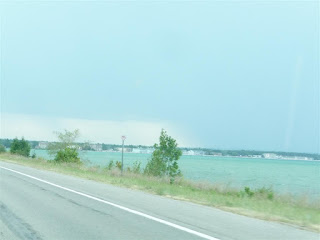 I took an alternate route from Traverse City to Interlochen via Silver Lake Road, Secor Road and Long Lake Road just because it was prettier than 31. More curves, too. It was just after 6:00 PM so we went directly to the Interlochen Motel, an odd little place, and checked in. The place was crowded with folks who were in town for some kind of an engine show. The lady on the desk moved her car so we'd have a place along the side to park the trailer. The fact that it was a strange little place with nothing special to recommend it, that the rooms cost $119 per night plus tax and that it was full on a Thursday lets you know just how popular that area is.

After taking our luggage to our room, we drove over to Cycle-Moore Motorcycle Campground, which was only a couple of miles away. Most of the folks were already there and set up. 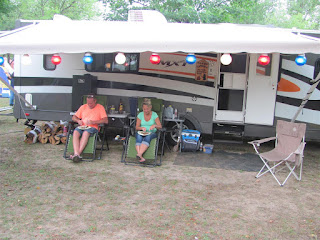 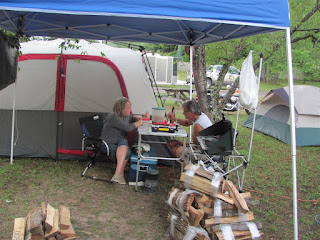 Wilson and Jamie came by car 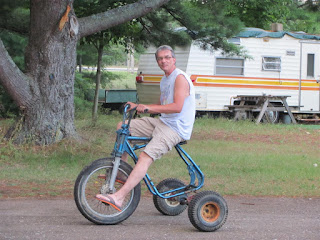 But Wilson found some wheels anyway 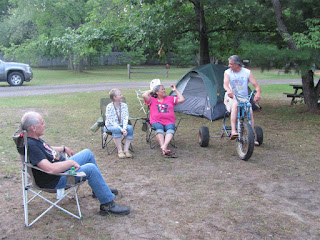 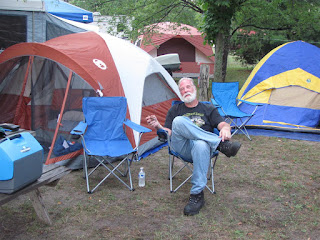 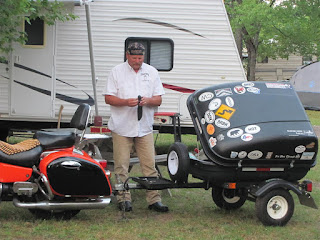 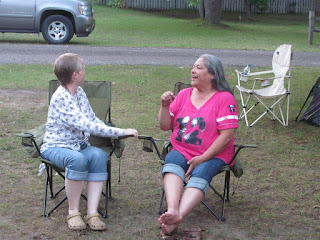 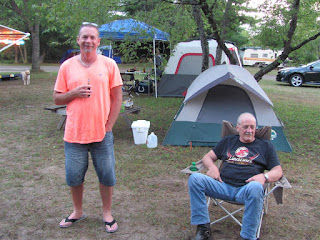 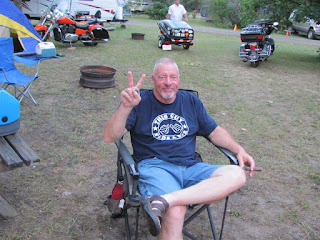 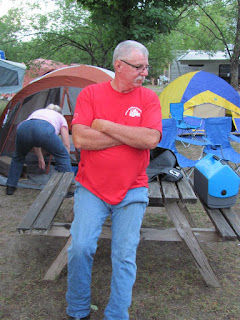 It was nice to see first-timers Tim and Dee, who had come in with Big Jim from Indiana. They hadn't eaten yet so, after I unhooked the trailer, they got in the truck with us while Jim followed on his Nomad. First we checked Dilbert's, right next door, but it was closed. Then we drove east several miles to Rico's, which was still open and had a table for five. The food was good, as was the service, and the conversation was better.

Back at the campground, we didn't stay long. I was still beat from lack of sleep the night before, so we were back in our motel room by 10:00 PM. The lady at the desk had warned the other guests might be a bit rowdy but there wasn't a peep out of them. 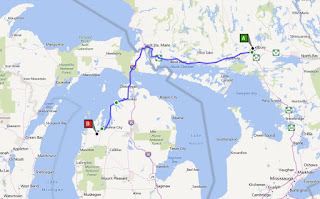