I woke up late again this morning. Jolene gave me a lesson on using the elliptical machine in the basement. She said she wasn't allowed on it unless an adult was present. Still, aerobic workouts are a good habit to acquire at any age.

The breakfast of Cinnabons wasn't the healthiest, but it was popular. Kim had suggested that the Rockton Fall Fair (modestly referred to at the Rockton World's Fair) might be an entertaining place to visit. The little village of Rockton on the highway to Hamilton is better known as the home of the African Lion Safari. My plan was to arrive at the fair early and beat the rush.

We were early indeed. We parked just outside the gate right next to the handicapped spots. Parked in an empty lot in Rockton

The midway didn't open until 11:00 AM, so we toured the poultry building. There were more types of chickens, roosters, ducks, geese and turkeys than I have seen in one place in a long time. There was also a section for rabbits, which interest me more than the birds. 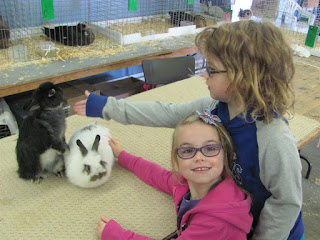 Can we have one? 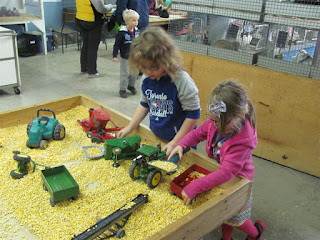 A corn box for future farmers of Canada

We walked through the Midway area checking out the rides and then decided some food would be in order. Man does not live by Cinnabon alone. There were any number of food concessions but I suggested we support the local Lions Club because they put the money they make back into the community. The girls had hot dogs while I enjoyed stacked back bacon on a bun. It was cool and there were strong gusts of wind, but I had to call it a fine fall day. 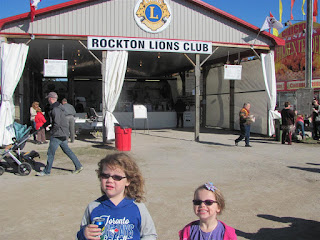 The midway still wasn't open so we wandered through some other pavilions. In one we watched a bit of the alpaca judging. Then we went through a building filled with goats. There was even a breed of goat that had no ears. I had never seen one before but I found the La Mancha breed has been around for a long time. 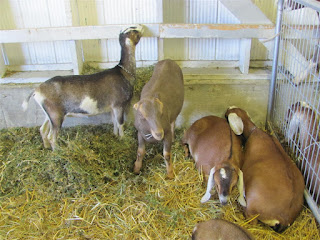 The midway was finally coming alive. I suggested that each girl could take three rides. In practice, that expanded to four rides each and then we all went on the Ferris wheel together. 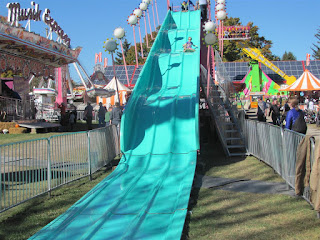 Robyn on the Super Slide 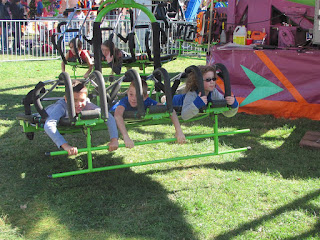 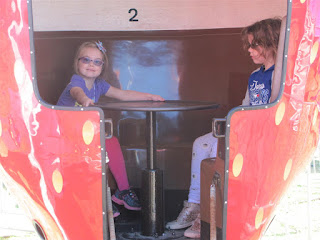 The only ride they did together 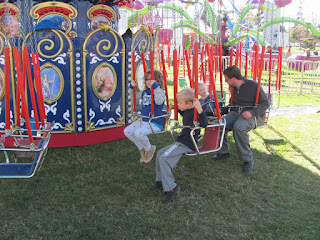 Jolene tried the swings, too 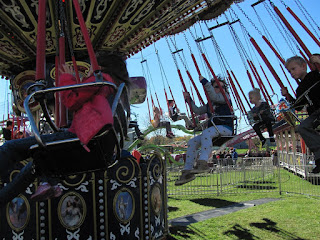 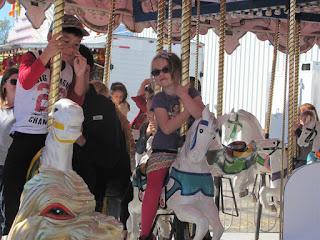 Robyn on the Merry-Go-Round 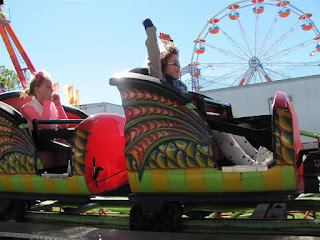 Jolene on the Dragon coaster 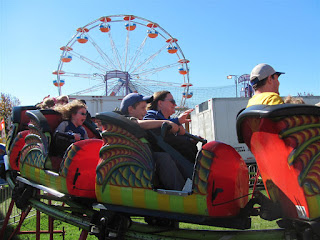 Why aren't her hands up now?

With the fun done, we decided to head for home. On the way out, I donated to the Boy Scouts and they gave each of the girls a nice apple to eat on the way back. The parking lot was now full. At least that was what the sign said. The early bird gets the worm. Of course, I often wonder how that works out for the worm.

Kim and Mike were already home when we got there. It was time to haul the bed over to Heather and Tom in Woodstock. Robyn and Jolene elected to come along so we moved their booster seats in the Equinox and set out. I asked the girls to make sure we didn't lose the trailer.

The girls played with Jasper and his toys while Tom and I disassembled the bed in the trailer, carried the pieces upstairs and reassembled it in Jasper's bedroom. Heather had this bed when she was going to university. The way it goes together is ingenious but not necessarily evident without the instructions. Still, we got it done. 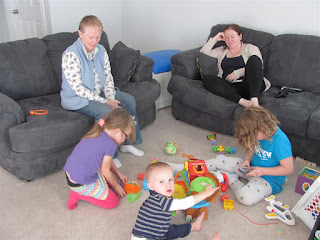 It was unfortunate that we couldn't stay longer but we will come and visit longer on Halloween and maybe go out with Jasper. We had to go home tomorrow because I broke a tooth just before the weekend and I had a Monday appointment to get it fixed.

We got back to Cambridge by 4:30. Mike ordered supper from Swiss Chalet, who now have rotisserie beef on their menu. Not a fan of their chicken, I found the beef was pretty good. After the girls went to bed, the four adults watched Toronto win the do-or-die ball game against Texas and then hit the sack.
Posted by Jim "Skid" Robinson on 10/11/2015

Speaking of merry go rounds...our granddaughter Harper finally got on an up and down elephant. Of course she had a death grip on me the entire time. Her sister, June, has been riding the up and down animals for a while now. It is funny to,see how twins develop separately from each other.