Happy Thanksgiving!! In only 19 more days, we'll be leaving for a week at Disney World.

We were in no rush to leave so Mike made breakfast. Then he had to go into work after getting a call from a contractor who was doing a job today and got stuck. As Mike pointed out, this person will be likely to turn to him again because he helped the guy out of a bind on a statutory holiday. Good business practice.

I decided that since it was Sunday morning, we would follow Highway 401 all the way to Highway 400 before turning north. The price was right on this route. In Mississauga, the westbound traffic was backed up but our eastbound side kept rolling. Things slowed down around Dixon Road, but we kept moving. I switched to the collector lanes and got to the 400 ramp without a problem. 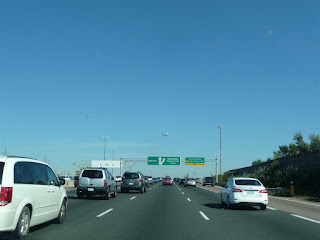 Traffic was moderate heading north. The west wind slapped the unladen trailer around a bit, but it was manageable. I found the Chev was more stable if I locked out 6th gear. We were passed by a Lamborghini that exited at King Road. I have no idea why a car that exceeds the speed limit in 1st gear is attractive, but it did look good. We also passed a broken down Rama Casino bus. 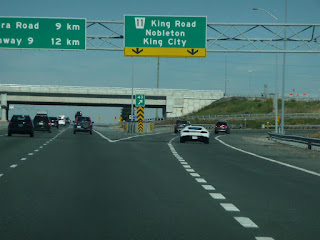 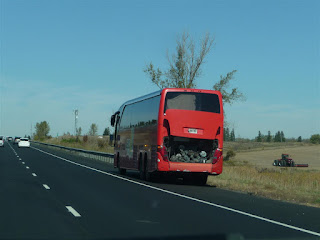 Near  Holland Marsh, two OPP Golden Helmets passed us, followed by a Suburban towing their support trailer. The Helmets always ride side by side, even when traveling with the full group. It looks really impressive but my survival instincts question the number of options the riders would have if something suddenly went wrong.

North of Highway 89, the southbound traffic started to back up (as usual). 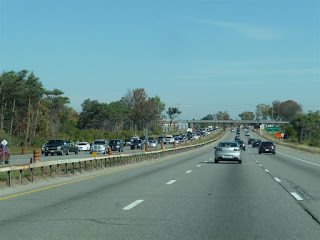 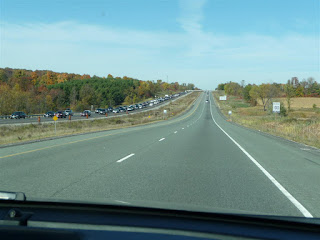 Nobody on our side of the road north of Barrie 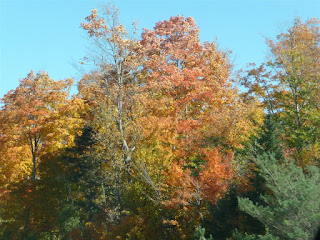 Some leaves have changed 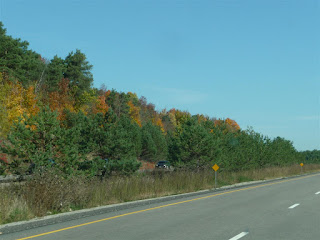 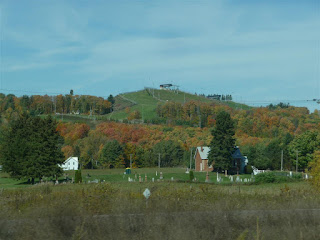 It was time for fuel by Waubaushene, so we stopped at Roberts Esso. It wasn't as busy as I had expected, given the volume of southbound traffic. After I filled the tank, I found a spot to park the outfit and we went inside. A sandwich to go from Subway plus coffee and cookies from the adjacent Country Style Donuts and we were rolling again.

All went well until we came to the end of the passing lane before the Pickerel River Bridge. At that point, northbound traffic ground to a halt. I remembered that the French River Bridge, a couple of miles ahead, was down to one lane controlled by traffic lights due to construction.

We crawled ahead and, every so often, a line of about 80 cars would go by southbound. It took about a half hour to cover the two miles to the bridge and get across, 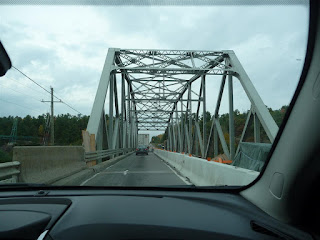 Crossing the French River one lane at a time

Once we were officially in Northern Ontario, I deduced that more people from the south had been visiting us than the other way around. It took us a half hour to cover two miles. The southbound line extended eleven miles back past Highway 64, all the way to the four-lane. Someone at the back would be here for hours. 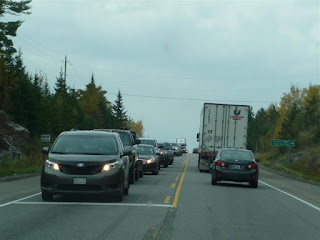 Next in line to cross 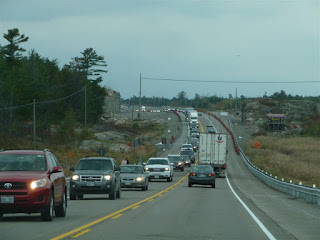 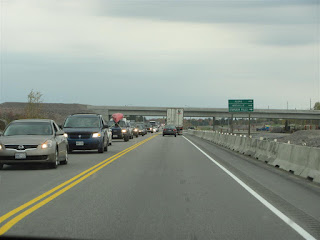 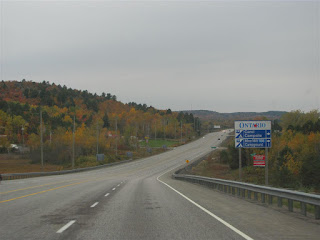 Clear roads, one of the perks of being a Northerner

The rest of the way to town was uneventful. At the TownPlace Suites, we saw tour buses and trucks belonging to the Paul Brandt/Dean Brody 2015 Road Trip. It turned out that they would be playing at the Sudbury Arena tomorrow night. 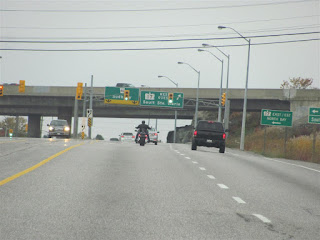 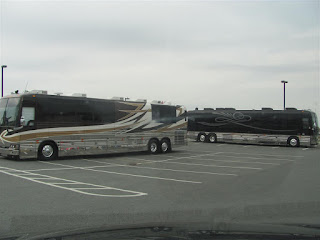 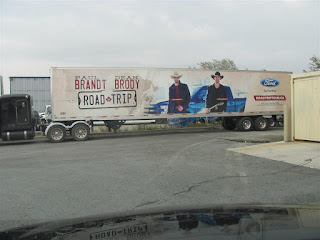 I was backed into the driveway by 4:45 and we were unloaded and unhooked by 5:00. I took the Equinox out and filled it up. The fuel mileage for the trip was just over 15 MPG (US), or 18 Canadian, compared to a typical 12 US in the Avalanche. 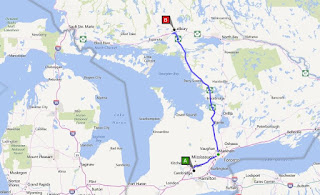