Canadian Thanksgiving was upon us. We hold it much earlier than our neighbors to the south, probably because our harvest season comes sooner. Since we hold our Turkey Day on a Monday, it is a true three day weekend with no Black Friday and, because it is in early October, we don't have the whole start of Christmas shopping season overtones. For those of us in Ontario, it signals the Ministry Of Transportation shutting down the roadside picnic areas for the winter.

A while back, Kim and Mike had asked us if we would come to Cambridge and watch Jolene and Robyn overnight on Saturday while they attended a wedding in Fort Erie. We said sure. Plus we had a youth bed to deliver to Heather and Tom in Woodstock for Jasper's bedroom. Since the Equinox was much smaller than the Avalanche, we loaded the bed in the trailer. This would give us a chance to see how the new vehicle and trailer would work on the highway.

One thing I noted earlier this week when I used the trailer to haul the snowblowers to the shop for servicing was that the drawbar on the Class III hitch Larry's installed was loose in the receiver, causing a rattle/clunk when we hit a bump. And there are a lot of bumps on Sudbury streets. I stopped by Larry's yesterday and picked up a Roadmaster Quiet Hitch kit, which installs easily and immobilizes the ball platform in the receiver. We hooked up the trailer and left it ready to go overnight.

I slept poorly again last night. This is getting to be a habit I'd like to get rid of. Sandy did most of the packing. The one thing I had to do was print the Email Kim had sent me with instructions on how to pick the girls up after school. One thing. I printed it and left it on the printer. No big deal because Kim and Mike called as we were leaving town to tell us they had tickets to the afternoon Blue Jays/Texas ball game in Toronto and, in the course of getting the data, we found out she had given me the wrong combination to their front door.

After the traditional breakfast-to-go at Tim's, we were on the road by 9:05 on damp pavement under grey, overcast skies with the temperature hovering around 46 F. The little Chev pulled the lightly loaded trailer just fine. I expected this because, at 303 HP and over 270 ft/lbs of torque, the V6 has almost as much power as the V8 in the Avi. There is no Tow/Haul mode but the transmission slipped between 5th and 6th gears easily under manual control and the torque converter locked up better. There was still a bit of clunk in the ball/trailer interface because I hadn't checked the coupler fit, something that is usually more pronounced when the trailer is empty. Still, I was happy with the way it pulled and the Driver Information Centre told me I was getting better mileage than the Av. 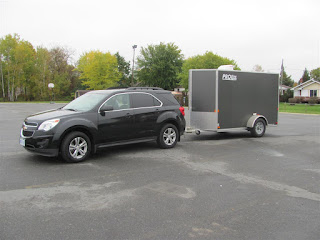 I experienced a few bouts of disorientation, possibly attributable to the lack of sleep and dehydration, or it could be a holdover side effect of the Champix (no smokes since June 4th, no Champix since July 19). It isn't too bad in the car but is a real pain when it happens on the bike. I need to find a fix because I find myself not looking forward to riding for fear of experiencing vertigo on two wheels. In any case, the feeling didn't last too long today.

We stopped at Tim's at Horseshoe Lake south of Parry Sound for a bathroom break. There were a couple of busloads of people there so we did our business and got back on the road. The leaves were finally starting to change. Here's hoping the late colours will be the sign of a late and mild winter. 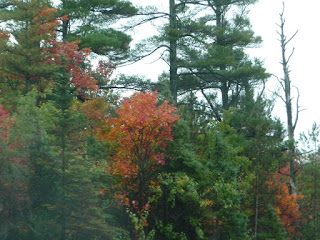 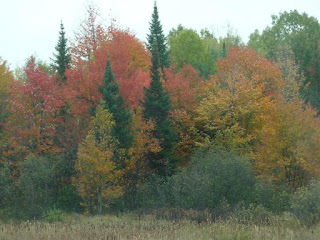 South of Barrie, the northbound side of the 400 was starting to get busy. One drawback to the Equinox is that it's gas tank is smaller than the Avi so that, even with lower fuel consumption, it will mean more frequent stops when towing. We stopped at the new On Route service centre near Innisfil for the first time but we couldn't see any food we liked, so we just filled the tank and moved on.

There was a McDonald's on Major Mackenzie within sight of Canada's Wonderland. We ate in the restaurant because we had time to kill. I look forward to the days we can take the grandkids to Wonderland. We continued south on 400 until I saw an overhead sign that gave a longer than expected time to the 401. Although I hate the exorbitant tolls, I made a last minute decision to take the ETR407 and bypass the suspected traffic.

As we turned to the west, severe crosswinds started acting on the light trailer. I didn't notice it as much in the Avalanche, but it was a lot heavier than the Equinox. The traction control includes a trailer anti-sway component which I suspected was adding some extra action to the stability control. I turned Stabilitrac off for a while and things seemed to improve. Again, I know this will get better with more weight in the trailer.

The 401 was slow in Halton as we transitioned from the toll road, but it soon picked up. It ground to a halt again just past where we got off at Townline Road in Cambridge. We worked our way down Franklin Boulevard through the construction zones and roundabouts waiting to be completed, and arrived at Kim and Mike's before 3:30. I backed the trailer into the driveway, noting again that this tow vehicle length makes backing up as easy as pie, even when turning more then 90 degrees into a driveway with a pole right beside it.

I worked on a few things on the computer until 4:45, when it was time to pick the girls up at school. We took Kim's Mazda with the car seats to the school, where we had to get by a door buzzer and show ID to a protective (but really pretty) teacher before being allowed to collect the kids. Jolene informed me that the ball game was in extra innings so that Mom and Dad would be later getting home than expected.

At home, Jolene (six years old) heated left over pizza and wings for all of us in the microwave and we settled down to watch the game. Texas won in the 14th and Kim called from the train station to let us know they would be in about 9:00 PM. I fell asleep in the recliner and woke up just before 9:00 to find Sandy had put the girls to bed single handed and Kim and Mike were just coming in the door.

We visited a bit and watched the new episode of Blue Bloods before turning in. 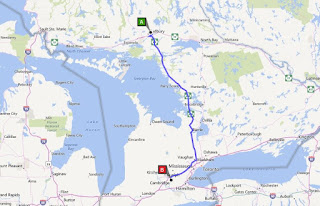