But we won't be home to celebrate. Actually, we never do. We usually go to dinner and a movie instead. But things were different today. This is the beginning of our trip to Disney World in Florida with Kim, Mike, Jolene and Robyn.

Last week was a scramble to get various tasks done before departure time. The bike got stored, as did the lawn mower (after cutting the grass as short as I dared to minimize spring raking), while the snowblower was moved to front and centre in the garage. I worked my way through the various task lists until the only thing I had undone this morning was to buy a new pair of shoe laces.

We will be flying out of Toronto tomorrow. I have only flown once since 9/11 and am not up on the rules, so packing was a matter of checking various websites. Kim and I were comparing notes last night and it seemed that she had some sort of numbered ticket receipts for WestJet that she said she got in Bolton when we booked the flights. I couldn't find mine and didn't remember getting any, so I called the airline. The phone was answered after three rings by John, a real Canadian voice, who looked things up based on a confirmation number I did have and explained that I had everything I needed. He also gave me some tips about checking in. Three cheers for West Jet.

Sandy and I each had one suitcase weighing under the 50 pound maximum and one carry on bag. Mine was my laptop bag with computer, meds and paperwork. We finished putting the last things in the suitcases this morning and loaded them in the Equinox. This would be the first trip in the new vehicle without towing the trailer.

We stopped at Tim's for the usual breakfast to go on our way out of town and were rolling south a few minutes after 9:00 AM. The sky was grey, the temperature was in the low 40's and specks of rain were falling as we cruised along in light traffic. 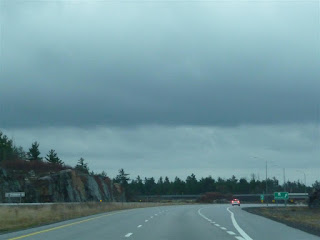 As we crossed the Naiscoot River about 70 miles south of Sudbury, I spotted a bald eagle soaring above the highway. I can't remember ever seeing one of these majestic birds in this part of the country before.

We stopped at the Tim Horton's at Horseshoe Lake Road south of Parry Sound. It was very quiet here and most of the folks that had stopped looked like hunters.The skies were clearing and the leaves were mostly gone. There was another stop at the new On Route at Innisville. There was a construction zone near Highway 9 signed at 80 KPH. I slowed to 90 and was almost run over. Why put these signs up if no one is going to enforce them and everyone is going to ignore them?

Traffic was light so we followed 400 right to 401 west. I got off the 401 at Highway 6 North and took County 34 west. At the first traffic circle, I turned south and we worked our was on back roads to the south end of Franklin, thereby avoiding the traffic and construction zones. I don't think it saved any time but it was more relaxing.

On Highway 6, we saw a Miata done up in racing stripes and a number. From the front, it looked very much like a Lotus Elan. If only the new ones had a spare tire....... 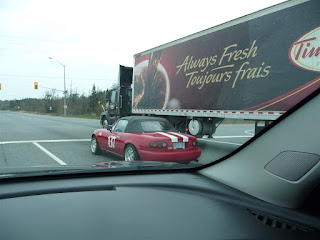 After stopping at Subway for a sandwich to take to Kim and Mike's, we were in their driveway by 2:15. The girls were on a play date while Kim and Mike were trying to get things into suitcases (he ended up with one weighing 49.8 pounds). I stayed out of the way and took a nap until Heather called about 4:15. Sandy and I left the packers to their task and headed off to Woodstock, stopping at Walmart to finish my To Do list by getting some black shoelaces.

Jasper was cute as a lizard in his green costume. There was a discussion about whether he was an alligator, a crocodile, a dinosaur or a dragon. The very young go out early in this neighborhood and I followed Jasper as Tom took him from door to door, lifting him up the steps where necessary. Tom would knock, then Jasper would knock. When the door opened, he would grin from ear to ear, take what was offered and carefully place it in his bag. As he walked away, he would say "Bye" some of the time.

It started lightly raining as we went out. By the end of the first block, Grandpa decided to go back because he was taking these shoes and this jacket on an airplane early in the morning and would rather they weren't too wet. Tom and Jasper went on right around the block and got home a bit later. 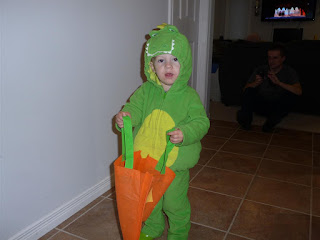 It isn't easy being green 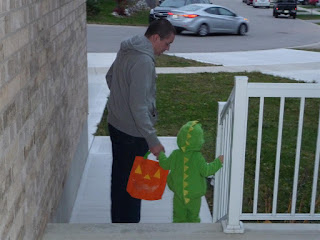 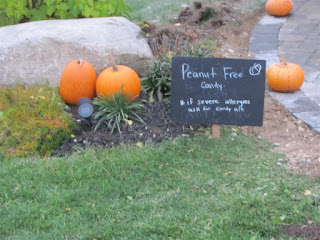 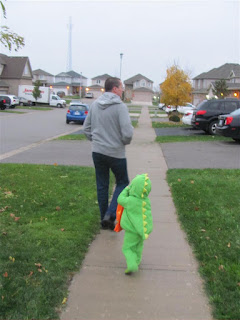 Walking with a purpose 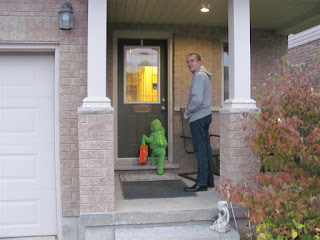 When everyone was back and Jasper's costume was off, he seemed surprised (but not unhappy) to find that all the candy was his. As kids came to his own door, he would rush to answer it. All in all, he did very well on his first Halloween. 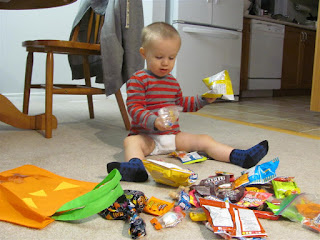 The spoils of Halloween

We started back to Cambridge about 7:00 PM in the dark. It was darker because the light rain sucked up all the light. It made it seem even darker when we set the clocks back before going to bed. The morning would come early so I tucked myself in about 10:00 PM (new time). 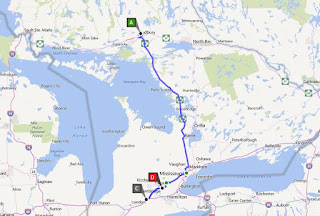 This was the first Halloween that I walked with our granddaughters trick or testing in our neighborhood. Trick or treating is held from 6:00 to 8:00 pm. It was a great night for trick or treating...no rain and the temperature was just right. We walked several blocks, zigzagging on the streets between our hous and the firehouse. It was close to 7:30 pm, when both girls said they were tired and wanted to go home. Harper was Scooby Do and June was Fifi the poodle.