I woke up just before my alarm went off at 5:00 AM and could hear others stirring as well. Kim had worked out that for six of us, it was almost as cost effective to order our own limo rather than schedule a shuttle for the 50 mile drive to Toronto Pearson International Airport. Our flight was scheduled to leave at 10:00 AM and WestJet said to arrive three hours early, so the limo was laid on for 6:00.

The long, white, stretch affair arrived a couple of minutes early. The two rear forward facing seats were equipped with the required booster seats for the girls. The driver had stocked the bar with ice, water and coke in case we were thirsty. Coffee would have been nice. After loading the luggage, we were on our way. The only problem was that the overhead panel to control the fans, heater and lights was inactive, as was the phone to the driver. They were all lit when we got in, so we suspect that Mike accidentally tripped some master switch. 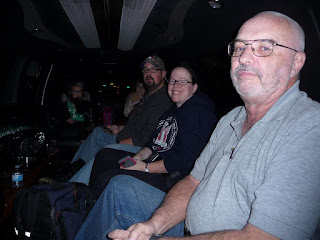 Lined up in the limo 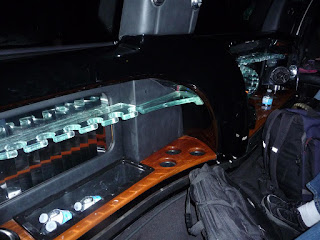 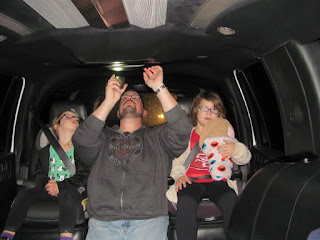 Mike trying to figure out the controls

It was hard to park the limo at the departure entrance to Pearson, but our driver got a spot. We loaded the luggage on two carts, Mike signed for the trip, and we were off to check in. A lady helped Kim print the boarding passes and get luggage tags at a self service kiosk, then they weighed our luggage and we moved on to US Customs and Immigration pre-clearance. 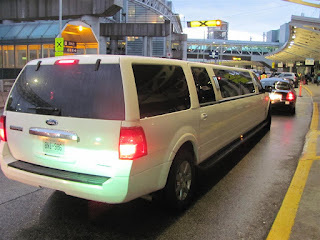 Our limo at the gate 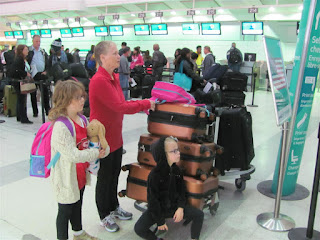 At customs, we put our passports into a scanner, answered a couple of questions on the touch screen and were asked a few more questions by an agent, who then stamped our passports and boarding passes. Then they took our checked bags and put them on a belt. This process will save a lot of time on the arrival end. Next, it was the security check where we took off our shoes. I was asked to remove my laptop from the case and send it through the scanner separately. Kim, who had been flagged from the beginning, was selected for a full body scan. No one would say whether this was random or triggered by some set of circumstances.

It was early and the lines were short, so we were through the whole process in no time at all. Once inside the secure area, we found a restaurant and had breakfast. Then we proceeded to the lounge at our gate, where our plane (a 737-800LR) was already in place. 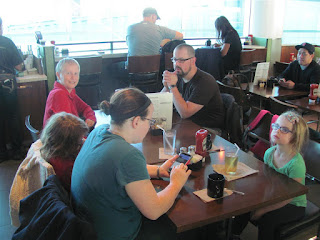 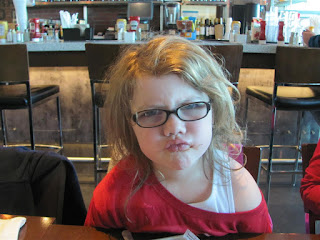 Maybe we got Jolene up too early 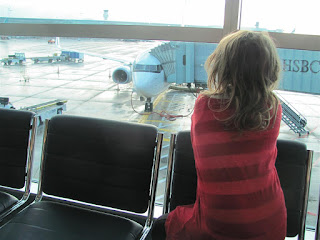 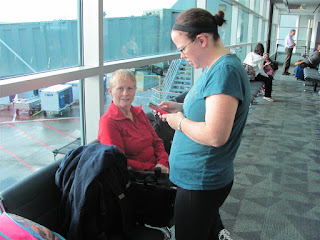 They called our flight about 9:20. First those needing assistance, then WestJet Plus (their new sort of first class) and then by sections. Our seats were a complete row of six seats across but towards the rear, so it took us a while to get settled. On the left side , Jolene had the window seat with me next to her and Sandy on the aisle. On the right, Robyn had the window with Kim next to her and then Mike.

We pushed back on time and there was no waiting as we taxied to the active runway. I talked Jolene through the engines spooling up and the start of the take-off roll. She wasn't concerned when we got airborne but kept asking if we were "up" yet. That meant cruising altitude to her. I was able to watch our altitude and ground speed on the screen ahead of me and assured her that she would feel the plane level off and hear the engines throttle back when we were "up". After 20 minutes or so, that's just what happened. 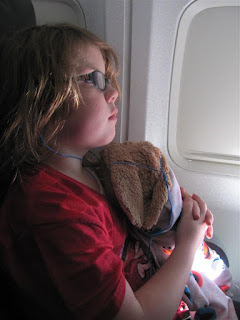 Jolene and Bunny at 500 MPH 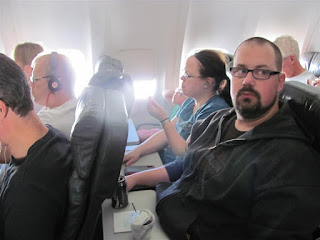 The other side of the aisle

The girls were very good during the flight. Mike got them earbuds so the could listen to the TV screens in the seat backs ahead of them. I watched the flight data and read my Kindle. We don't get food but there was a non-alcoholic drink included in the flight. Having flown only once since I retired, I couldn't help but notice how much more cramped the seats were. We started our descent about Jacksonville and were on the ground in Orlando ahead of schedule.

There was a tram/train from the terminal we landed at to the main building where we went from level 3 to level A2 to collect our bags. Then we went to A1 looking for the Disney shuttle. It was on B1 so we had to go back up to A3 and across the terminal and back down. Once we got there, we showed our ticket and were sent to the correct line for the Contemporary Resort. There were multiple lines and many people. We met a fellow named Brent and his family. He was born in Peterborough but now lived in Dayton, Ohio. 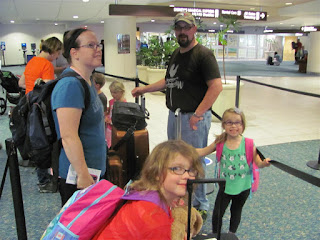 Waiting at Orlando Airport for our bus to Disney World

We checked in at the Contemporary Resort front desk assisted by what Disney refers to as Cast Members. Here, we were given our Magic Bands, RFID wrist bands that they could not ship to us ahead of time because we were in Canada. These bands would authorize every aspect of our stay here from opening our hotel room door to charging our meals to access to the parks. Our rooms in the Garden Wing were quite a walk but they were first floor, large and adjoining. We were settled by 3:30 PM. 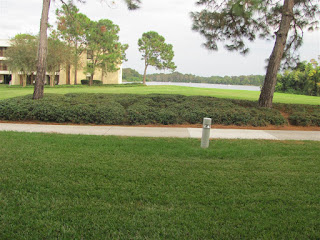 View out our patio door 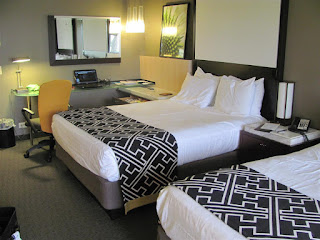 We had reservations for supper at The Wave of American Flavors in our hotel at 5:30. To start the Disney experience, I led everyone to the Contemporary monorail platform about 4:30 and took the Resort Monorail clockwise around the lagoon. There is also a Magic Kingdom Monorail that travels counter-clockwise stopping only at the Transportation Center (parking lot) and the Kingdom. We got back to the Contemporary just in time to get to the restaurant. 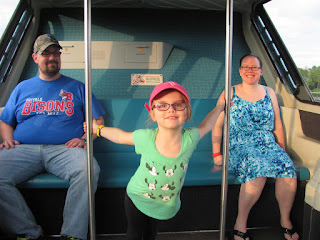 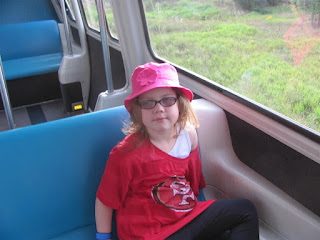 Jolene on the Monorail

The food plan we are on allows us one Table Service Meal a day plus one Quick Service Meal and one Snack. The Wave was table service and the server explained we were entitled to one entree, one non-alcoholic drink and one dessert. Appetizers and alcohol were extra and would be charged to our room via the Magic Band, as would the gratuity of 18% (added because we were a group of six or more). He tapped Mike's band for their room and my band for our room and we each entered the PIN we had set at check-in. Mike and I had the filet with mashed potatoes and crisp green beans. Very good. Dessert was a wave, three different things. 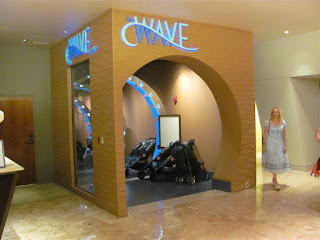 The Wave of American Flavors 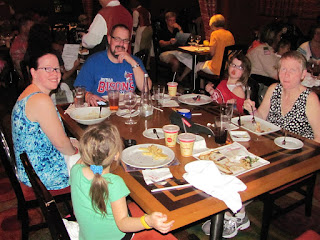 Our park passes were the base level, one park per day, so we stopped at the concierge after dinner to upgrade them to Park Hoppers. This allowed us as many parks in a day as we wanted. After a check to be sure the girls were not too tired, we got back on the Monorail and then changed to another Monorail to Epcot. Bands were scanned at the park gate along with a scan of one fingerprint to be sure the band owner had not loaned it to someone else. Whoever used the band first would have to be the one to use it ever after. There was also a security line for anyone with bags.

One thing Kim had purchased was the Memory Maker. There are photographers all over the Kingdom ready to take guests' pictures. With this, they are linked to us through a tap of the band and ready for download at our leisure. 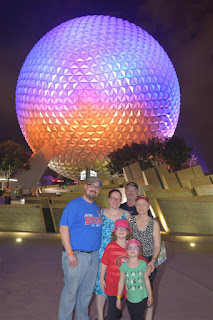 The ride most associated with Epcot is Spaceship Earth, the huge geodesic dome that guards the entrance. There was no line so we climbed aboard and took the fifteen minute low intensity ride through the exhibits about the history of human communication.

Following that introductory ride, we walked to the nearby Seas pavilion, took the Finding Nemo ride and then wandered through the aquarium admiring the fish. 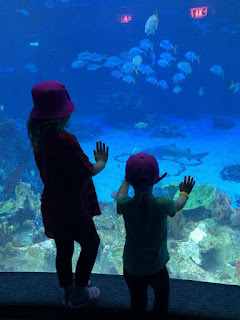 Many fish up close 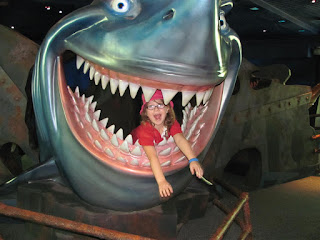 As it got closer to 9:00 PM, we worked our way down towards the World Showcase Lagoon for the IllumiNations fireworks show. The best seating was available by FastPass, which we hadn't though to use for this, but we still found a spot and admired the explosions and laser display.

It was now after 9:00 PM and the park full of people was closing. The assembled multitudes made their way back to the main gate. Some headed for parking lots, others lined up for buses and we (after a stop at Package Pickup for some moonshine) headed up the ramp to the Monorail. The system handles huge groups of people very efficiently and we were on the second train out of there.

After a change of Monorails at the Transportation Center, we were back at the Contemporary Resort by 10:00 PM and all of us were in bed by 11:00. I saw on Facebook that our VROC friend Coach Rick from Rhode Island, a travel agent, was on the property. He was going to Animal Kingdom tomorrow, as were we. We traded phone numbers with hopes of connecting.
Posted by Jim "Skid" Robinson on 11/01/2015