The kids slept all night in our room with nary a sound. Mike and Kim told us that they got back to Epcot for the late hours and found the rides were open but all the booths, restaurants and bars (the reason they went back) were closed.

Today was supposed to be an off day, a day when we could do whatever struck our fancy. We downloaded some MemoryMaker photos and then headed out for the Magic Kingdom. The original plan had been to stop at the Contempo Cafe for breakfast but we were running late. Let me point out that trying to make up time by skipping a meal is not the best way to keep oneself operating at peak performance. Or even at the much lower performance level I am capable of.

When we got to the Magic Kingdom about 9:45, we found that in the last 10 hours that the park had been closed, Christmas had arrived. There was a big tree in the square on Main Street and all the lamp posts were decorated. So were the picture windows of every shop. This theme continued throughout the park. I would like to see what kind of project and task lists they use to enable this to get accomplished overnight. 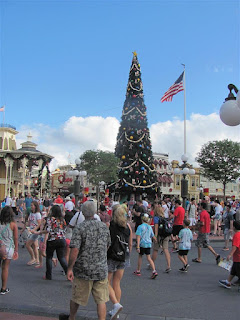 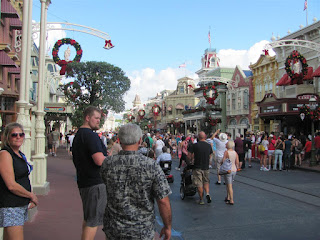 
The reason we were in a rush was to make the FastPass time we had for Pirates of the Caribbean. Unfortunately, after a high speed walk to Adventureland, we arrived to find the Pirates shut down for the foreseeable future. We got an Email a short while later informing us of the shutdown and telling us we could use a FastPass on any of a list of other rides any time prior to park closing. This is where the smart phone beats my old flip model hands down.

It wasn't all bad, though, because the girls got a front row seat at a live pirate show. In fact, Jolene even got to act with the infamous Captain Jack Sparrow. 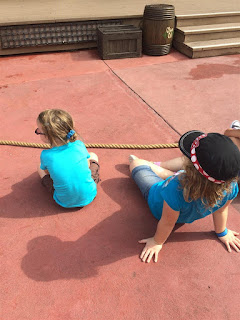 Get a good seat 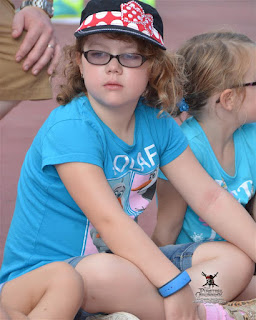 Waiting for the pirate show to begin 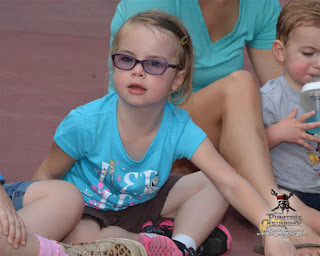 Robyn didn't want to get on stage 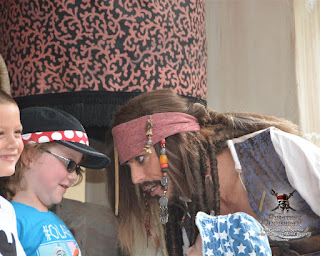 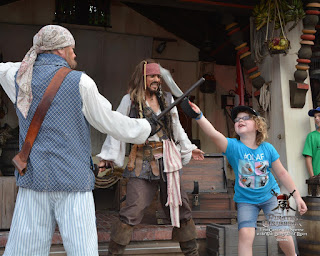 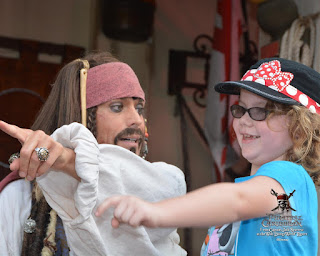 One on one coaching from the best 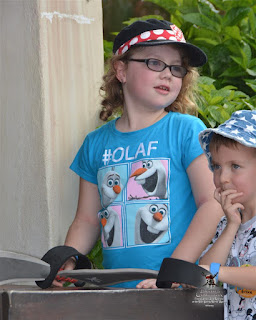 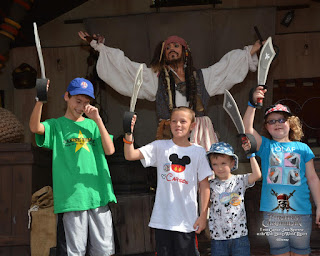 The new crew is ready to plunder 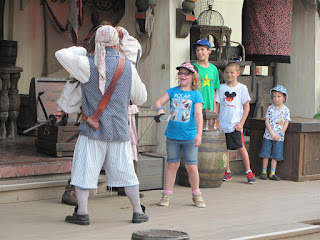 But first, a score needs to be settled

From Adventureland, we walked across the park to Tomorrowland where Sandy, Kim, Jolene and I had FastPasses for Space Mountain. We were concerned that Robyn wouldn't make the 44" height limit, so Mike took her on the Test Track. 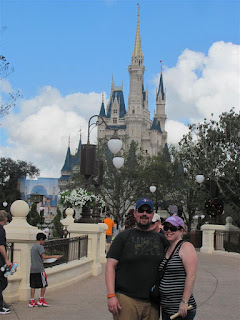 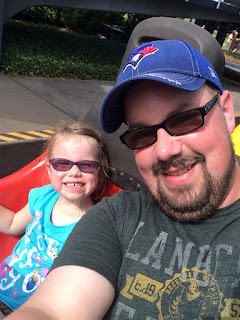 Robyn and Mike on the Test Track 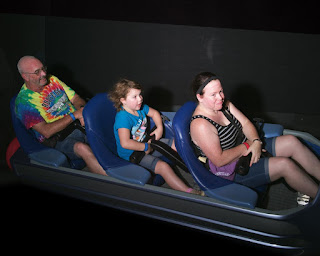 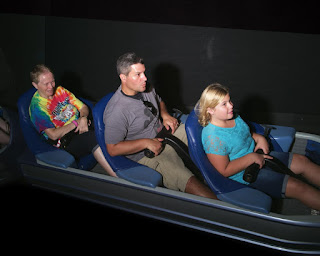 After we were done on Space Mountain, we met Robyn and Mike at a Tomorrowland cafe where the girls split an order of hot dogs and apple slices. This made up for their not having breakfast. I was still waiting to make up for MY missing breakfast, but we were off for a FastPass to see Tinkerbell on Main Street first. 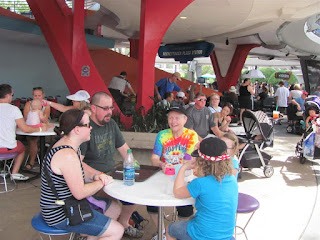 Quick snack for the kids 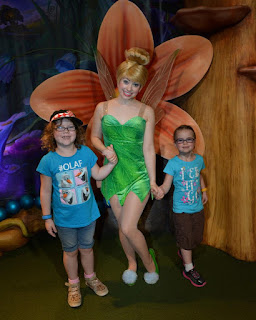 Tink and the girls 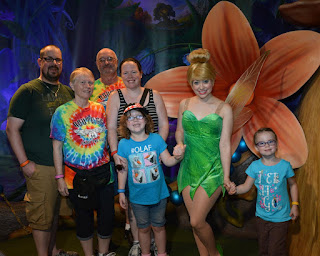 Plus the rest of us

It was strange to be on Main Street in 100 degree heat with Christmas carols booming out from the speakers. Sandy was in the gift shop when a kid stepped on her foot. She actually apologized (for having her foot there, I guess) and he stuck out his tongue. This was nothing at all like the polite child from back home that we met yesterday.

I spent some time talking to a young cast member in the gift shop. His name was Dayvon and he moved to Florida from Staten Island when he was 14. His education was in programming but he was in the employ of The Mouse until he could find a position that he liked. Many of the cast members (staff) come from all over the world.

There were many happy kids shouting and playing in the town square. We saw a group in red shirts escorting wheel chair bound children in some sort of Make-A-Wish kind of scenario. It is great that people will donate time to help these young people have a positive experience. 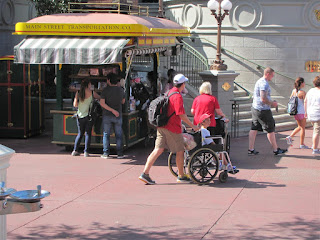 Some of the folks escorting the handicapped kids 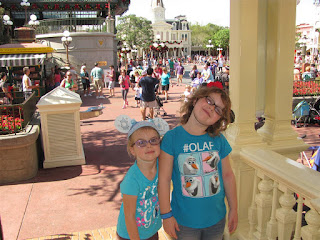 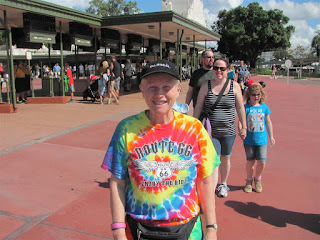 Heading for the monorail station

We got back to the rooms about 1:40. Some flaked out for a bit while I used the time to sort some photos and transfer some blog notes. The Disney Memory Maker package was good for getting high quality photographs of our adventures, but the interface was cumbersome and downloading the pictures was far from intuitive. I spent some of the time sorting these out. 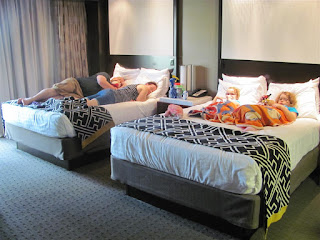 Rested and relaxed, we all headed out to the hotel pool for a swim. I didn't take the camera so a few good moments didn't get recorded. They have a good water slide here that Robyn chose to go down all by herself. When no one was right at the bottom to catch her, she splashed for a moment shouting "I can't swim" before Mike grabbed her. She explained loudly that he should have been ready for her, then immediately headed back up for an instant replay. 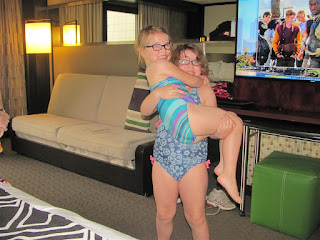 The girls are ready for the pool

After pool time, we got dressed and headed out to catch the bus to Disney Springs, formerly know as Downtown Disney. I stopped on the way to have the concierge correct a charge from last night that got crossed up between our accounts. These folks are always friendly and helpful. 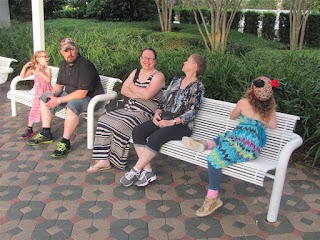 Waiting for our bus to Disney Springs

Disney Springs is undergoing a makeover and had a lot of construction going on. The map I had grabbed in the lobby was out of date so we got a new one that was different but still deficient. We finally asked for directions to Wolfgang Puck, where we had a table reserved. 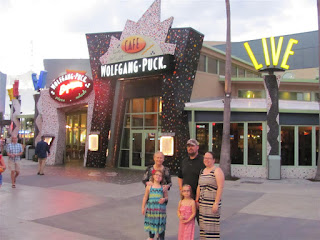 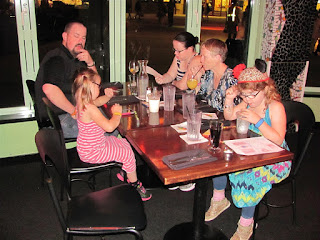 Settled at our table

The food at Puck was OK but nothing spectacular, I had chicken Alfredo that used noodles instead of linguini and was only warm, but my steak was good. David, our server, never refilled my coffee, a sure-fire way to get a tip reduced. I should point out that Puck is an independent operation, separate from the Disney company facilities. So far, this was my least favourite dining experience.

After supper, we wandered the crowded streets. There were outdoor musicians playing and the atmosphere was very cheerful. We topped at the Goofy Candy Store for some treats to take back with us. 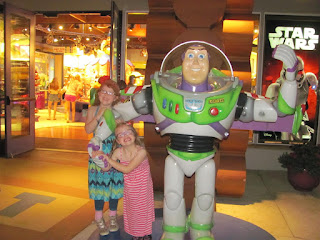 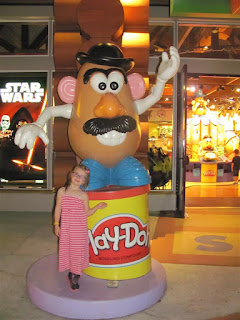 Haven't seen this in quite a while

There were many people waiting for the bus when we got back to the platform. It was hard to tell which was ours because there was a gate 3a and a 3b. We managed to get the right one and found seats at the back. Then it filled up. One lady had a scooter, so the driver had to come back and lower the ramp at the back door. When she was finally aboard and everything was buttoned up, she suddenly realized she was on the wrong bus and the driver had to reverse the process. I gave my seat up to a lady just before we finally got moving.

I found myself standing next to a young fellow from New Jersey (Jersey Week) who used to ride a sport bike but gave it up after he became a father. The passengers were all in a good mood and we laughed and joked a lot on the way back to our hotels.

We were back in the room by 9:00 PM and the girls went straight to bed. So, for that matter, did the adults. This place can tire you out very quickly. 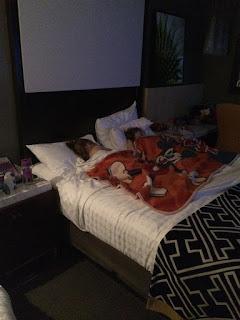