Disney has an on line system called My Disney Experience for planning your vacation experience. Part of our itinerary had been set up by our travel agent, Christine, at Fairytale Dreams and Destinations. Kim had been adding and modifying the plans ever since.

One of the key parts of this system is the FastPass+ feature. FastPass is a system that allows guests to select a ride and, for a one hour window, use a special FastPass line that bypasses the regular Standby line. You can normally only hold one FastPass privilege at a time. The FastPass+ allows ticket holders to book three FastPasses a day using the on-line system or app (subject to some limitations). Since no one wants to spend time standing in lines, managing these opportunities is critical. Kim had made preliminary selections but we were still figuring out the nuances.

Today we were scheduled for Animal Kingdom. First, we went to the Contempo Cafe in our hotel at about 8:15 for breakfast. A cast member assisted us with our first orders, which we told the cash and tapped our bands. Then we were given a tracking device to take to the tables and someone brought our food when it was ready. This counted as a Quick Service Meal. 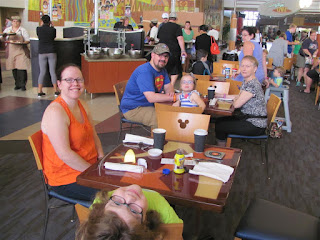 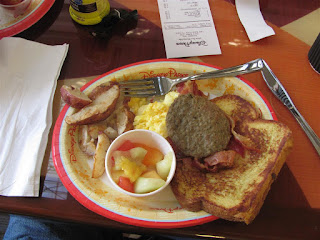 After a trip back to the room to put on sun block, we headed out front to catch a bus to Animal Kingdom. They have a sign telling the arrival time of the next bus to each destination. The time kept changing but, eventually, our bus got there. 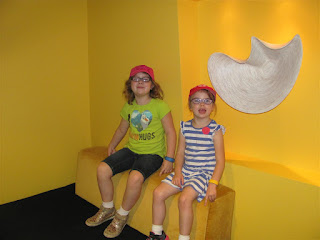 Jolene and Robyn in an alcove in our wing 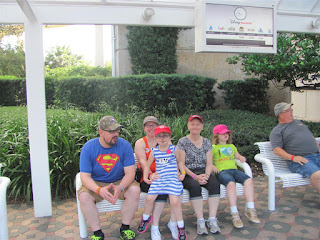 Waiting for our bus 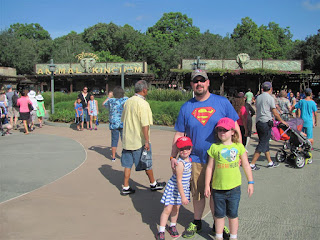 Arriving at the Animal Kingdom

The first FastPass that Kim had selected was for Dinosaur. Although Mike had the park map on his Smartphone app, I ended  up leading using the paper maps we had been given. The ride was fun as we were transported to the past to hunt for a specific dinosaur, although it bounced a lot as our "car" went over some very rough terrain. Jolene wasn't sure whether she wanted to do that again. 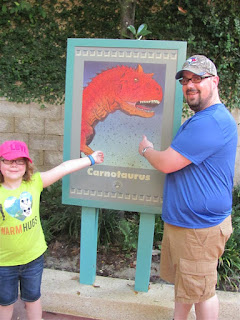 That wasn't the one we were chasing 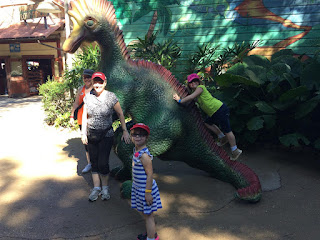 Please climb on the exhibits 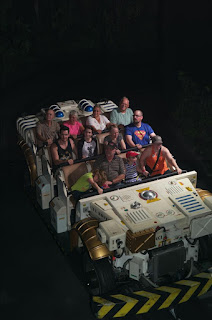 Hunting for the dinosaur

The next attraction was Expedition Everest. We worked our way from Dinoland USA to Asia. Kim, Jolene and I were reserved for this ride, a thrill roller coaster. It was just that, including a two direction reversals and a backwards section in the dark. It was more impressive than I had expected, although Jolene thought this might be her last Everest trip. Two for two. 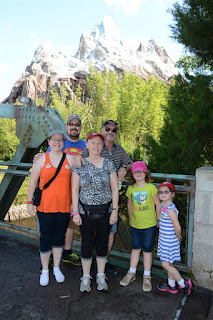 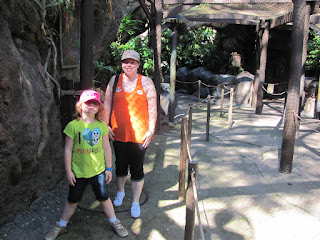 In the FastPass line 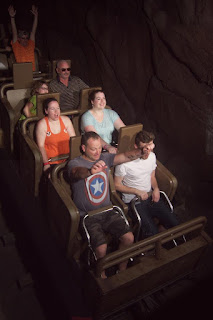 Sandy, Mike and Robyn waited for us. It was probably good that they avoided the coaster. Their FastPass was for It's Tough To Be A Bug, a 3D film and live show about the trials and tribulations facing the insects of the world. Kim and I missed this back in 2001, but we were able to squeeze in this time because the Standby line was as short as the FastPass.

It was hot out. Hot and humid. We moved on to Africa and found a place in the market where we got water and ice cream for the girls. There were African drummers in the square and, somehow, Mike got drawn into the dancing. 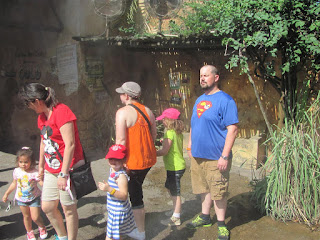 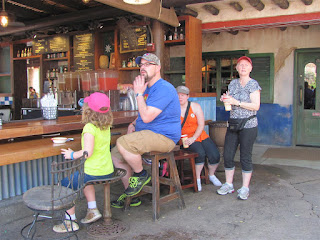 Refreshments at the bar 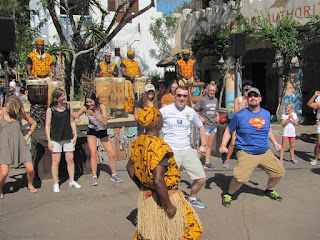 Mike dancing up a storm

The last of our FastPass+ selections for the day was a Kilimanjaro Safari. We climbed into what appeared to be 4WD vehicles and set out on an adventure across the African Savannah with our driver pointing out various animals. I took pictures of a few of them. 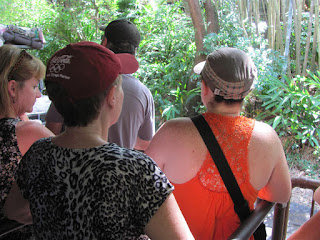 Waiting for our vehicle 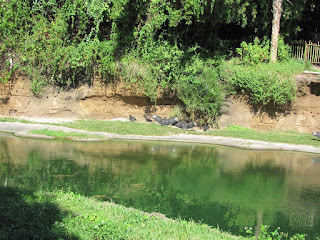 A flock of vultures 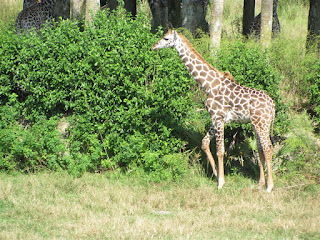 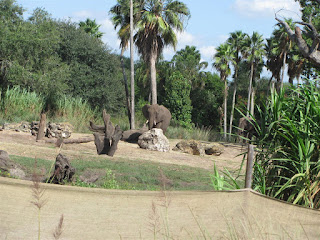 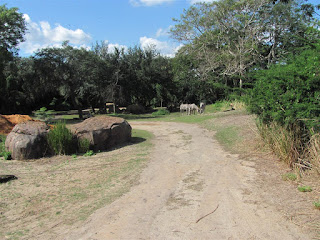 At the conclusion of our safari, it was even hotter. We stopped to refill our water bottles and tried to figure out how to book another FastPass. Once the three FastPass+ selections are used, you are supposed to be able to book additional single FastPasses on a revolving basis. That is, use one and then book another. But the app wouldn't allow this. (We found out later that subsequent FastPass reservations must be booked at in-park kiosks). 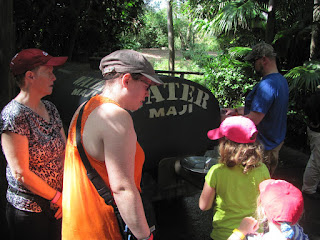 Unable to select a FastPass but in great need of a water ride, we decided to take the Standby line for the Kali River Rapids. Wait times for the Standby lines are posted on the app and also above the entrance. This one said 50 minutes. It took all of that and, as we stood in line, we saw the people move past us in the FastPass lane. We decided to find out how to book those subsequent passes ASAP. 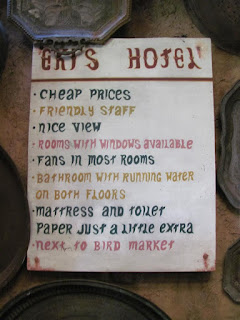 We got talking to a lady behind us in line. She was originally from Denver but was now living in Nebraska. For a number of years, she worked in Australia where she got to meet a Canadian couple. It turned out that the fellow she was talking about was someone I had worked with for a number of years and who Sandy had babysat when he was just a child. It's a small .....(no, don't say it). The ride was fun and we only got moderately wet. 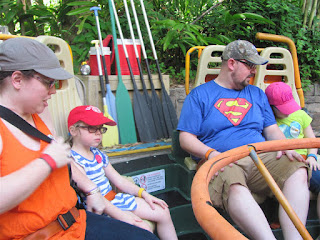 Settled in the raft 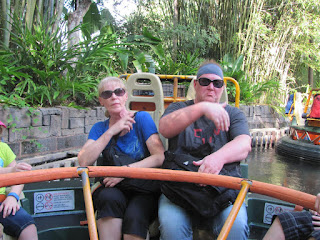 Brian's friend on the left

After Kali, we decided to head back to the hotel. There was a stop along the way for a park photo in front of the iconic Tree of Life. 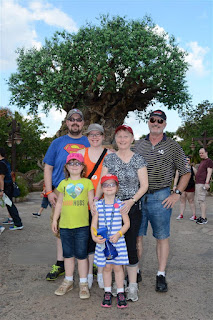 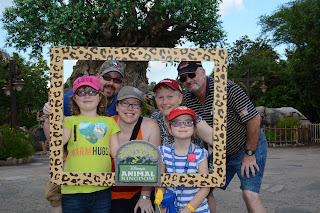 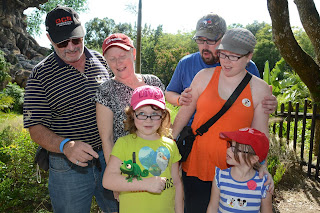 Can we bring it home?

The bus to the Contemporary was at the stop when we got there and we were back at the hotel by 3:15. Mike took the girls to the pool while Kim and Sandy took naps and I worked on my notes and photos.

Our Table Service supper tonight was at the Whispering Canyon Cafe at the Wilderness Lodge. It was just across the lagoon from the Contemporary but I wasn't able to find any details about the water transportation on-line. The website is pretty but it has some gaps and some broken links. No problem, because a quick question to one of the staff in the lobby told me there was a direct boat from our dock. There are three destinations the lagoon, the Contemporary, Wilderness Lodge and Fort Wilderness Campground. Two boats circle the lagoon, one clockwise and the other counter-clockwise non-stop until 11:00 PM. 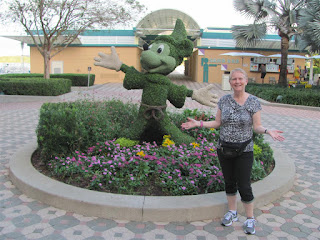 We caught the boat directly to Wilderness Lodge and worked our way to the restaurant. We were shown to our table and the hostess gave us a coaster with a green side and a red side. Red side up if you wanted things quiet and green up if you liked things more rowdy. We chose rowdy. Our server, Billie from Alabama, got our drinks. The smart choice was an All You Can Drink Milkshake, which most of us ordered in various flavors.

The menu was interesting. Numerous a la carte items were available but the popular choice was an All-You-Care-To-Enjoy Skillet. This was family style so the buffet came to the table, reminding me of the breakfast at Country Vittles in Maggie Valley. From the menu:

We all ordered it. We all enjoyed it. One tradition is that if someone asks for ketchup, the cry goes up and everyone brings there ketchup bottle over. They also had hobby horse races for the kids. Generally, it was a fun place to take children for supper. And they gave us our desserts to go. 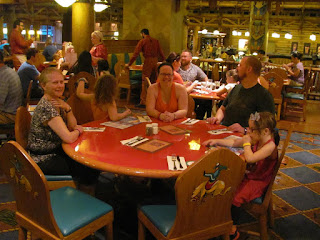 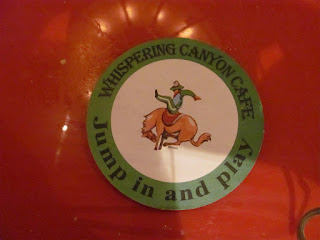 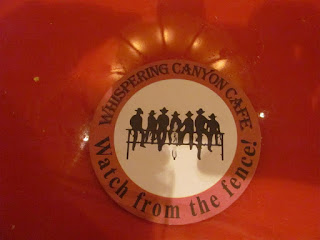 Stick In The Mud

After we were done, the paperwork was slow in coming so Mike and I sent the ladies ahead. The charges against the meal plans were crossed up with me being tagged for one adult and Mike for three. Billie said we could swap around at the next meal to sort it out. Mike and I hustled down to the dock but didn't see the girls, even though our direct boat was coming in. We returned to the hotel and found the rooms empty, worrying that they had waited for us somewhere at Wilderness Lodge. However, the four came in shortly after, having taken the other boat and returned the long way.

I found my cell phone had not rung while we were at Animal Kingdom but there were two messages from Coach Rick so I called him back. He was over at Magic Kingdom by now, but I had to tell him that my back was hurting and I was sorry but I would have to skip going over to meet him. He understood.

Even though you didn't complete your thought about it's a small world, the song is still in my head.