Our last morning in Walt Disney World had dawned. The express checkout page had been slipped under our doors while we slept. I checked it and found all to be in order. We had to be out of the room by 11:00 while the bus was supposed to leave for the airport at 5:50 PM.

If we were traveling within the USA, we would have been able to check our bags directly from the hotel. Because we were International, we would have to take our bags to the airport with us. What we could do was take the bags to the lobby and leave them in the custody of Bell Services until it was time to depart.

After stacking our bags on a luggage cart and tipping the bellman, we went to the Contempo for our final breakfast. I have to say that this restaurant has been a good start to most of our days. The food choices were good and the service was quick. It was fun to eat while the express monorail took the day visitors, noses pressed against the windows, over our heads.

With the day at our disposal, we once again returned to the Magic Kingdom by monorail. Mike owed Jolene a ride on the Tomorrowland Speedway, so the rest of us took Robyn to The Many Adventures of Winnie The Pooh (a repurpose of Mr. Toad's Wild Ride). Better than It's A Small World! 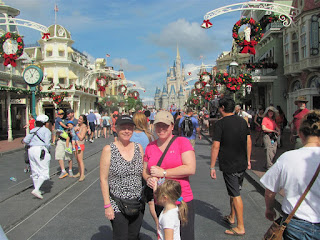 Back on Main Street 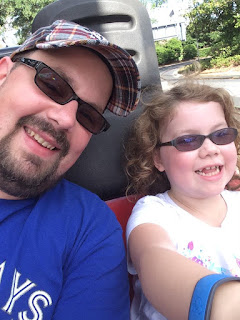 Jolene at the wheel 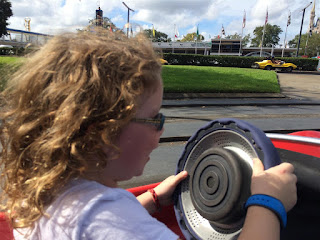 Afterwards, we met Mike and Jolene at the Monsters Inc. Theater. This is a stage show but some audience members are included by being caught on camera and put up on screens by the stage. For some reason, they picked Mike to play the role of Sully which had all of us laughing. Except Mike, who was busy being Sully:-)

After the show, we had ten minutes to get across the park for our FastPass on Pirates Of The Caribbean. It was hotter and more humid than it had been all week, but we persevered and arrived with three minutes to spare. This time, the ride was not shut down and we got to ride it right to the  end.

A word on the weather. It turns out that this has been the hottest first week of November since they started keeping records over 100 years ago. Plus the humidity today is so thick you could cut it with a knife. To say it was oppressive would be an understatement. My clothes were soaked with sweat and sticking to me like glue. 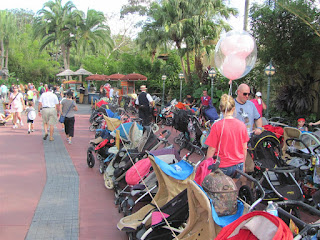 There are stroller lots all over the park

From Pirates, we rode the Aladdin Carpets where Robyn found a sword. We turned it in to the nearest cast member. The breeze from the moving carpets was a blessing. 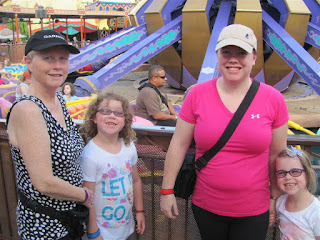 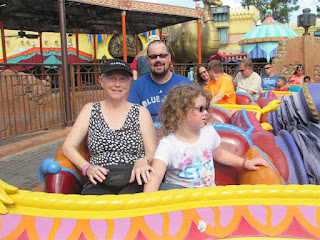 There were no more high power rides available for FastPass so we went back to the midway in Fantasyland for another Dumbo ride. Then it was back to Adventureland where we went to the Enchanted Tiki Room for old times sake. 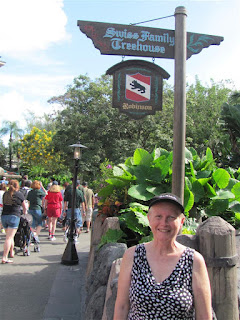 It was a good time for ice cream. They had an orange slushy with soft serve ice cream and citrus swirled 8 inches high. They can be messy if you aren't careful but they are cold. 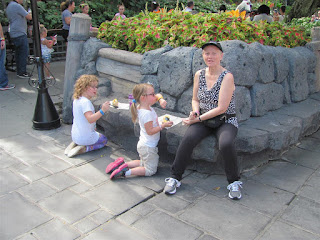 We worked our way back to Main Street where the ladies went shopping for a while. The shops have all manner of Disney and related paraphernalia. The rest of us waited outside. 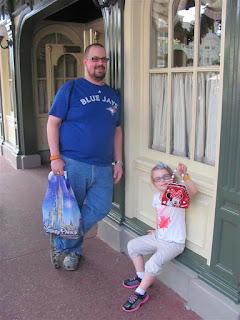 Waiting for the shoppers

Rather than take the monorail, we got on the direct boat from the Magic Kingdom landing to the dock at Wilderness Lodge. From there, we switched to one of the Bay Lake boats that took us to the Contemporary dock. 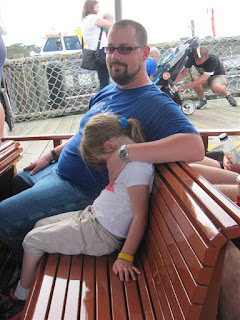 Someone is tuckered out 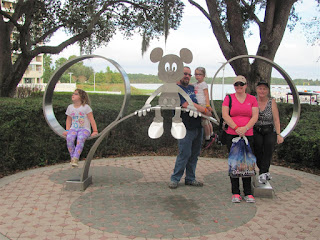 We recovered our bags from Bell Services about 4:00 PM and settled down in the air conditioned lobby to wait for our bus. As the time drew near, I spent some time talking to Chantal from Guest Services about changes they were planning. The bus finally arrived, we stowed our bags underneath and climbed aboard. After another couple of stops at other resorts, we were on our way.

Our arrival at the Orlando Airport at 7:00 PM was Terminal B, Level 1. We had to find our way to Level 3 to find the crossover to Terminal A. When we got to the WestJet counter, there was no one else around. They took our bags, issued our boarding passes and sent us to TSA Security.

Kim, Mike and the girls were directed to an express line for parents with small children. That was very thoughtful of the TSA. Sandy and I went the long way but there was hardly any line. We both got sent through the full body scan machine. When we got through, a supervisor named Barry was asking people for their opinions on the process. I told him the sign telling people what to expect should be further along in the line. He seemed surprised that anyone would read a sign. He was also engaged in a long conversation with Jolene.

We caught the monorail to the building where our gate was located. They had seating and some restaurants in the hub, so we had a late meal of Burger King while we waited for our flight to be called. Of course I still can't decipher what they say over airport PA systems despite all the new technology.

The plane was to board at 9:00 PM. WestJet does not pre-board children in Orlando because there are so many of them. We got on board and settled into our seats to watch the folks struggle to fit outrageous amounts of luggage into the overhead compartments.

Airborne 20 minutes late, we were treated to a brilliant display of heat lightning out the port windows. We ate our last container of Contempo potato chips and filled out our customs forms. Our cabin crew had left Orlando this morning, flown to Ottawa, returned to Orlando and were now on their way to Toronto. That was quite a day for them.

We touched down at Pearson International Airport at 12:21. We made our declarations at Customs and collected our bags. The second Customs officer waved us through and we found the stretch limo driver waiting with a sign that said "Jolene & Robyn". The 32F temperature felt good after the heat of the Florida day. We arrived in Cambridge at 2:20 AM and went straight to bed.
Posted by Jim "Skid" Robinson on 11/08/2015