Before we left for Arkansas, I mentioned that I had my eye on another vehicle. The Avalanche had well over 90,000 miles on it and had some issues after the warranty ran out. Plus its 5.3L V8 would pass everything except a gas station. We no longer needed the 8,000 pound plus towing capacity.

I had originally been interested in a Chev Traverse or GMC Acadia. These 7 seat crossovers have a 3.6L V6 rated at about 300 HP and almost as many foot pounds of torque and are rated to tow 5,200 pounds. The I realized that the 6 cylinder version of the smaller 5 seat Equinox had the same engine. It was only rated to tow 3,500 pounds due to the frame, but our trailer and bike come in at less than 2,000 pounds loaded.

I had seen a 2014 6 cylinder Equinox at Crosstown Chev before we left on the trip. It was still there when we got back so Sandy and I took it for a test drive last Thursday. This unit had 24,000 kms on the clock. That year had two LT build levels and this one fell in the middle. It had heated seats, 8 way power driver seat and climate control of the LT2 but was missing the fog lamps. In addition, it had a power sun roof, something we didn't really need. It needed a trailer hitch.

The test drive went well. It was comfortable and easy to drive. The Driver Information Centre showed good fuel mileage characteristics and the 303 BHP really moved it out when I put my foot down.

When we got back to the dealership, they offered me more on a trade for the Avi than I expected. I made a counter on the net deal they proposed and they accepted. We cleaned the truck out over the weekend and traded vehicles today. Next, it will be off to Larry's to have a Class III hitch installed (I could have gotten away with Class II but the heavier unit looks better) and we'll order some winter floor mats. 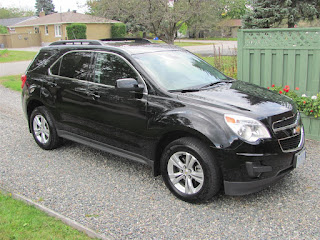