Sandy woke me at 6:30 AM again, but this time I had nine hours of non-stop sleep so I felt much better about it. The hot breakfast at this Best Western included some scrambled egg things, link sausage and tater tots. I took advantage while Sandy stuck with her usual. Heather stopped by with Jasper before we left. It was raining, but I pulled up under the overhang by the door so we could load the truck dry. 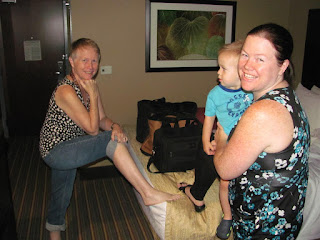 Sandy showing Heather and Jasper where the sand fleas bit her

We headed out about 8:20 AM, taking Highway 401 West. When we reached London, I took the 402 towards Sarnia and the Bluewater Bridge to Port Huron, Michigan. I refuse to pay Marty Maroun any money to use the Ambassador Bridge. 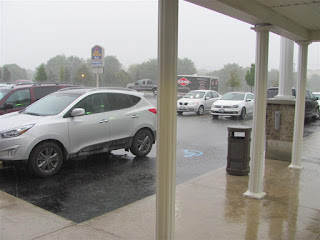 Raining in the parking lot 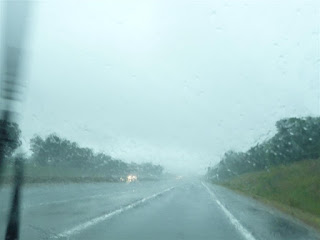 Raining on the road 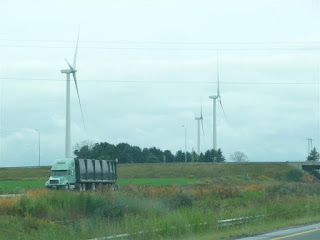 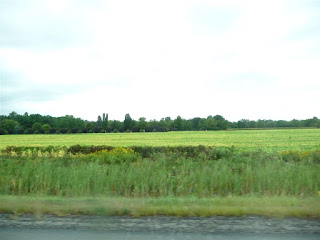 We arrived at the bridge and paid our toll. Then, for the first time in a very long time, we stopped at the Duty Free store. Nice place. Then it was over the bridge in the lane reserved for NEXUS holders. It was funny to watch a couple of pickup truck drivers getting into the Trucks lane. Trucks here means big rigs. There were more vehicles in the NEXUS lane than the regular ones, but we got through quickly. Five minutes waiting and less than a minute being interviewed. 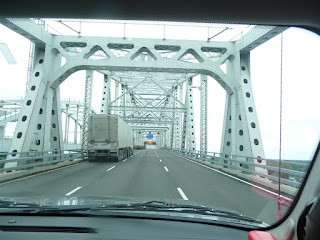 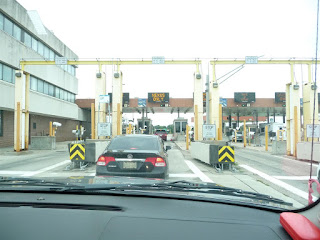 Leaving the bridge, we headed right into construction. I-69 and I-94 split without giving the destination of each. Very confusing. If I hadn't known I was taking I-94 to Detroit, I might have gotten lost. The drive down I-94 to Motor City was uneventful except that we were getting great fuel mileage due to a tail wind. 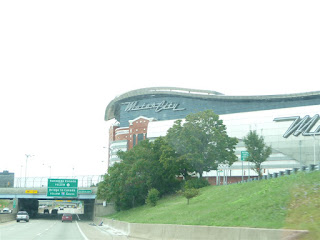 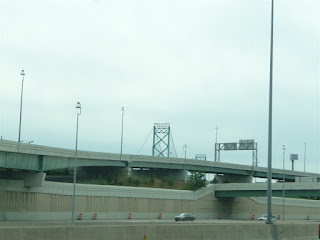 This is as close as I get to that bridge 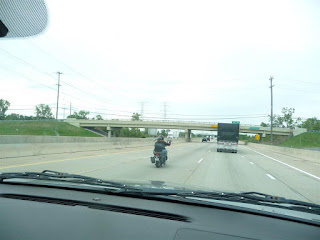 This girl must really love the guy

We caught I-75 South in Detroit. From there to the Ohio border, it was quite rough although there was some road work going on in a few spots. 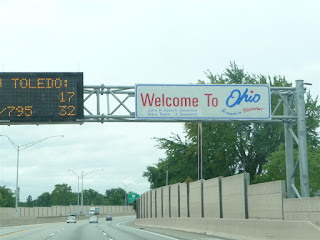 The moment we hit the Ohio border, two things happened. The road smoothed out and we entered a never-ending stretch of road construction. I didn't think there were that many orange barrels in the whole world. Where is all the money coming from?

We stopped in Findlay at a Bob Evans for lunch. This used to be across the road, and the roof leaked one time years ago when Sandy and I ate here during a rain storm. Tanya served us and was very personable. We both had a half sandwich and a cup of soup. Very tasty. Evans is one place where I always like the menu.

After lunch, we went next door to Walmart. I added another year and 800 minutes to my Trac-Fone and we picked up a few essentials. Sandy also got nose pads for one pair of glasses where the pad had fallen off. Then we stopped at Shell and fueled up for $1.999 per gallon. Between the price and the mileage, I paid $38.65 to cover 263.3 miles. Sherm called as I was fueling up to say he was ready to leave Kingman. 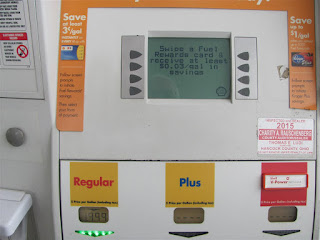 There were a few miles without road work south of Findlay but then we were back in orange before we reached Lima. (Lie-mah, not Lee-mah). An aside here. I really dislike LED headlights, especially on big trucks. There is something jarring about the wavelengths. But they are becoming more prevalent so I guess I better get used to them.

Approaching Dayton, we took the exit to I-70 East to Huber Heights. The interchange is new with sparkling white concrete and blue painted steel. And airplanes in relief. We got off a few miles down and found the Days Inn. The add said truck/bus parking but they were being a bit creative. Since we would be here two nights, I backed the trailer into a spot and unhooked before moving the truck up by the room and bringing the gear in. 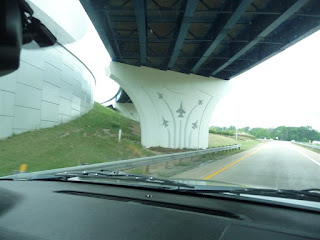 We went across to the other side of I-70 to Applebee's for supper. We had the two entrees for $25 special. Sandy had ribs while I had steak. The food was good but the menu in general doesn't seem as appetizing as in the past. 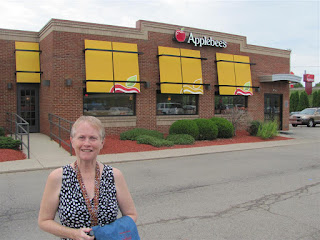 Back at the room, I did some prep work for the blogs but went to bed before getting anything finished. I need more self-discipline. 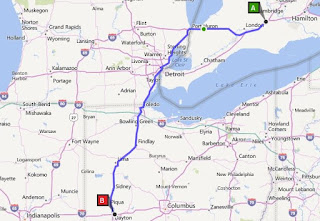