Sandy woke me up at 6:30 sharp. I didn't get much sleep last night, which is becoming a pre-trip pattern for me. It isn't one that I would like to continue. After getting dressed, we loaded the final bags into the truck and headed out of the subdivision. Today, our goal was to stop and visit Kim and Robyn in Cambridge before going on to see Heather, Tom and Jasper and spend the night in Woodstock.

I stopped at Crosstown Chev to get Freedom Riders VP Ken to sign a few club cheques before getting my breakfast sandwich at Tim's. We were on the road out of town by 8:30.

A brief aside about Crosstown. When I realized the ND Mazda Miata had no spare tire, I ruled it out as a cross country vehicle. I know bikes don't have spare tires either, but I think of cars differently. If I want to keep towing the bike but have a more efficient vehicle to use when not towing, a 6 cylinder Chev Equinox will do the job. Crosstown shows a loaded 2014 Equinox and, if we weren't leaving this morning, I'd be test driving it today. If it is still there in two weeks, we'll have to give it a close look.

The morning was warm and foggy. Once again, people hurtled around in next to no visibility with no headlights on. Using running lights means there is no illumination to the rear. It seems so simple..... 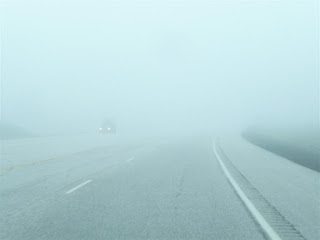 Having the elevations read out on the GPS screen reinforced one thing. Many times I would have sworn that we were going uphill while the GPS and fuel mileage readouts both told me we were going down. I can still see the ground and my senses are lying to me. No wonder pilots need instrument ratings for flying in poor visibility.

The fog started to clear around the French River, where I stopped to check the tie-downs. I was already starting to get tired and needed the break at the Tim's south of Parry Sound. 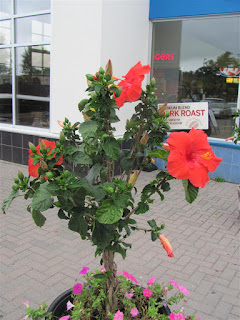 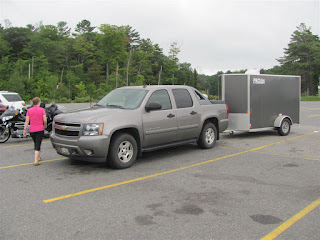 Sandy beat me to the truck

South of Parry Sound, we saw a few trees starting to change colour. While this will lead to an awesome display in a month or so, it is also depressing since it means winter is on its way. There were also a lot of caterpillar tents in the trees, something we haven't seen up around Sudbury yet. They are probably on the way since these critters are cyclical. 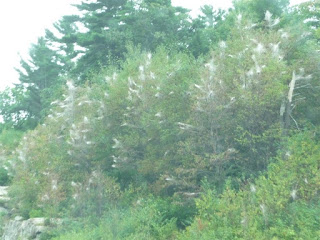 There was a lot of roadwork all the way down Highway 400 to Toronto. We did note that the new On Route Service Centre at Innisfil is open, which will probably have an impact on my southbound trip planning in the future.

In Toronto, they COMPASS sign at Highway 7 said it was 15 minutes to the 401. I expected about five, so my guess was that things backed up further on. To avoid that, I decided to spend the outrageous coin that I would be billed for taking the ETR407 toll road. Traffic was even fairly heavy along this route.

In Cambridge, Franklin Boulevard is being heavily reconstructed. Apparently, a lot of intersections will be replaced with roundabouts. In the meantime, I think I'll avoid it whenever possible. We pulled into Kim's driveway at 1:40 PM. Robyn was home because they are staggering the start of school and her Senior Kindergarten class will begin tomorrow.

The four of us went to Boston Pizza for late lunch. Kim took me to TD so I could get some more US cash and investigate a screw up of my own making regarding payment to Disney next week for the November trip. It seems some transactions can't be undone, but we will work around it. Then we stopped by the school to pick up Jolene and take her home. 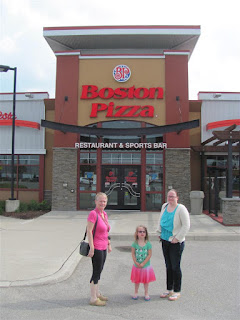 Not long after getting back to Kim's house, we pushed on for Woodstock. The Best Western is a short hop from Heather and Tom's house. It started as a Microtel but is now a very well appointed BW with a very friendly staff. Once we got checked in, we headed over to see Tom and Jasper since Heather was still at an appointment.

Tom had a lot of leftovers from the Labour Day BBQ, so he made us something to eat while we played with our grandson. Heather got home about 7:00. Jasper went to bed not long after and I couldn't stay awake either, so we left about 8:30. 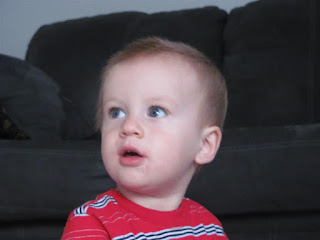 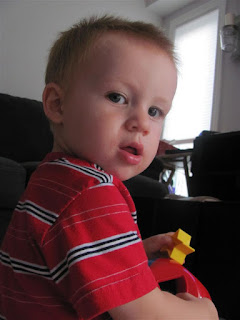 Working on the puzzle ball 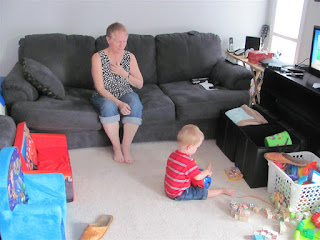 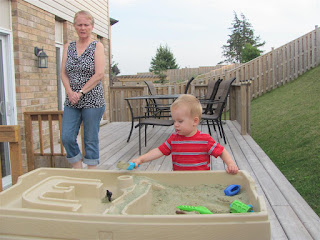 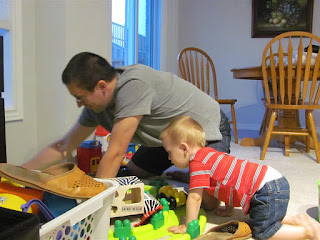 Back at the hotel, I didn't have the energy to blog or post the bills. I hit the sack with my Kindle about 9:00 PM and was sound asleep by 9:30.

BTW, we received word today that Wayne Mogensen, am active member of the MS Society Sudbury Chapter, passed away. We were just talking to him about ten days ago. Wayne was a unique individual and we will miss him. Rest In peace, Wayne. 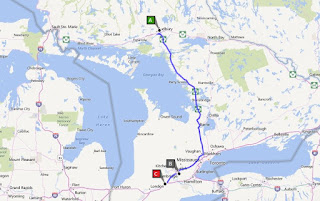