As expected, we slept very well on the excellent Hampton Inn mattresses and pillows. I don't know how they do it but they are always the best. We enjoyed the hot breakfast just after the 6:00 AM start time. Sandy just had cereal and yogurt anyway, but I tried what they call a bagel topper; egg, cheese and bacon on bread plus some sausage links. Then we loaded the gear in the truck and headed across the way to the Super 8 to settle the bill.

It looked like the desk clerk's kids lived there because the school bus was picking them up at the front door as we arrived. The manager didn't come in during the night as promised, leading me to believe this place is being poorly run and may well be on its last legs. No problem because we now know where the Hampton is. The desk clerk, still very apologetic, had asked someone and was able to run the refund on my credit card. And then we were out of there, northbound at 7:10 in the 11C air. 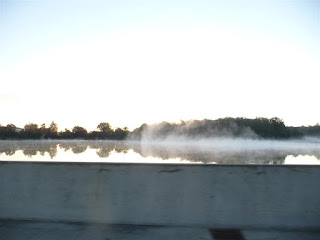 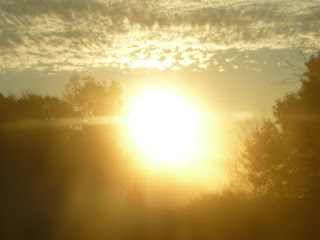 We crossed the Michigan state line about 7:40 and the temperature almost immediately dropped from 11C to 8C. That's about 47 F for you metrically challenged folks. We stopped at a McDonald's on the north side of Lansing for a bathroom break and coffee, and then continued north on US 127. The truck was showing 15+ MPG due to a stiff tailwind. 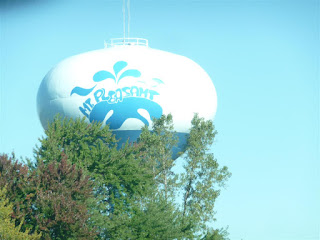 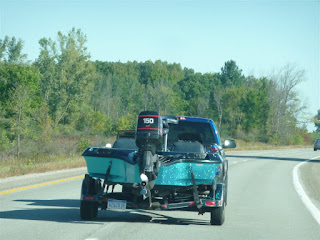 Sparkly bass boats remind me of a certain motorcycle

We stopped again at a Citgo near Roscommon for fuel. I was surprised to see the price was $2.145, much lower than we had seen so far this morning. Things were uneventful until we reached Grayling, where I-75 was down to one lane north all the way to Gaylord. In that thirty mile stretch, we saw one crew ripping up asphalt and another paving. The whole construction operation was spread over a mile or so. I guess they figured shutting it all down was more convenient for them. 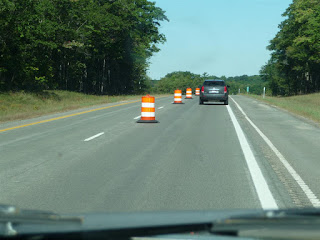 Miles and miles of orange barrels

Usually at this time of year, the trees are starting to colour nicely but we saw vary few changing. It was the beginning of Fall today but perhaps this was a sign that Winter would be late this time. We can always hope. 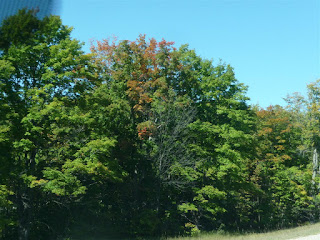 Just a hint of colour

North of Indian River, we found more single lane highway. This time, they didn't use the infernal barrels. Rather, they used the thin poles. A crew here was fixing cracks with reams of tar snakes. I hate tar snakes. 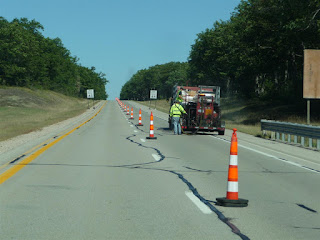 There was more construction than usual on the Mackinac Bridge. We were held up near the far side as the removed some grating so that a worker could climb down under the paved surface. That doesn't look like a job I would line up for. 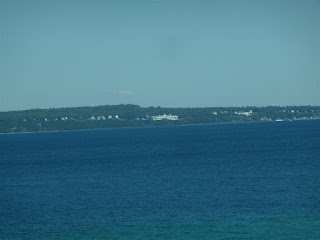 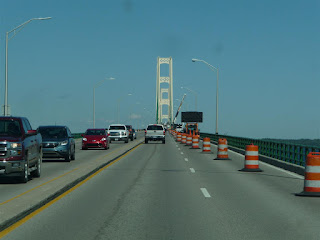 Orange barrels on the Big Mac 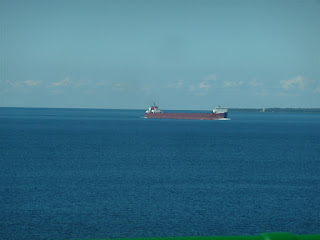 Lake boat in the Strait 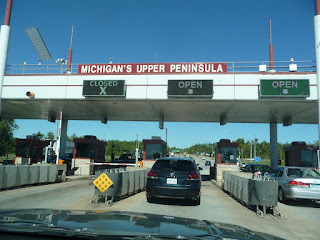 In the land of the Yoopers

We arrived in the Soo and, as usual, fueled at the Krist station before approaching the border. There was a line up for the single toll booth lane because the other lanes were under construction. Someone ahead of us in a white Hyundai with Quebec plates gave the toll taker a long song and dance. When I got to the window, the fellow wasn't very amused. 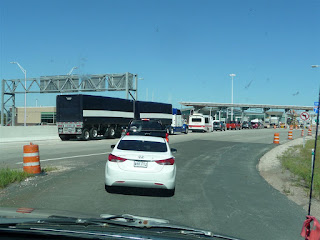 Merging into a non-moving line 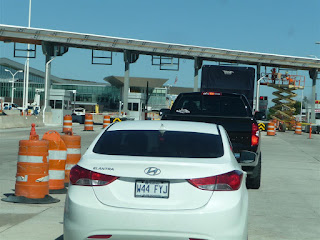 This guy took more than his share of toll booth time

Before we started up on the bridge, we were stopped by a crew of US Customs and Border Protection officers with Police marked on their vests. I've never seen those patches on CBP agents or officers before. They were looking in some vehicles, including the trunk of the Hyundai. I told them where we had been and that we had a motorcycle in the trailer. They passed us through without further inspection. 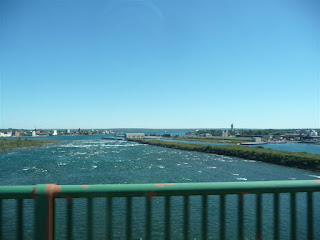 We made a brief stop at McDonald's before heading east out of town into a solid headwind. The GPS said we'd be home by 6:50 but, due to a quirk in its handling of 90 KPH zones, I knew we would beat that by a lot. The other side of Echo Bay, we saw a Jamie Davis size recovery operation underway to get a semi back on the road. It had gone off a straight stretch of road. 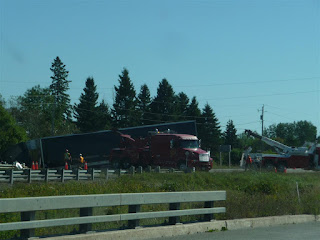 Although we had clear skies all day, as we approached the Nickel Belt clouds started to gather on the horizon. Our final stop was a bathroom break at the McKerrow Tim's. 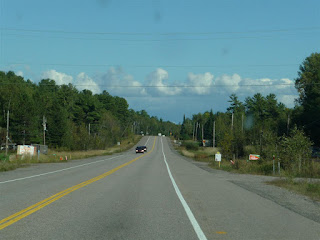 On the last leg approaching Lively on the four-lane Highway 17, we caught up to a car hauling a U-Haul that was swaying all over the road. It looked like the trailer had been packed light in the tongue, resulting in an accident looking for a place to happen. We slipped past and kept going.

Arrival time was 6:20 PM, a half hour better then the GPS guess plus the amount of time we stopped in McKerrow. I really don't know why the Garmin is so far off on this type of road but that has been consistent for my last three units.

The bike was unloaded, the trailer disconnected and the luggage brought in within a half hour. I took the truck out to top it up since I didn't expect the $1.006 price to last for long. Today was either the last day where daylight was longer than night, or the first where it was the other way around. Either way, it will be hard to say goodbye to summer and get into winter mode. Actually, winter is fine. It is the interminable in between seasons that wear me down.

In any case, it has been another good trip. 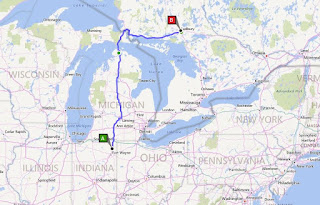